Please ensure Javascript is enabled for purposes of website accessibility
Log In Help Join The Motley Fool
Free Article Join Over 1 Million Premium Members And Get More In-Depth Stock Guidance and Research
By Sean Williams - May 2, 2016 at 3:47PM

Despite disappointment surrounding its next-generation injectable drug, Amgen's Q1 offered plenty of evidence that its long-term growth strategy is on track. 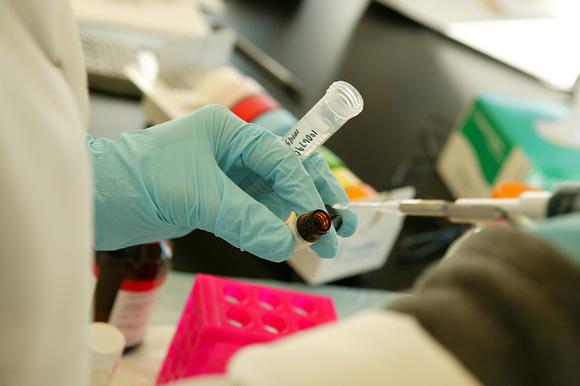 Stop me if you've heard this story before: Amgen (AMGN 0.93%) crushes Wall Street's expectations. If you're an Amgen shareholder, or you've been following the biotech blue chip for years, you'd have stopped me by now, as surpassing profit expectations has been the norm for Amgen for seemingly years.

Amgen's stellar Q1, by the numbers
For the quarter, Amgen reported total revenue of $5.53 billion, a 10% increase over the prior-year period. Adjusted operating income grew by an even more robust 17% to $2.86 billion (alluding to improved margins, which we'll get to a bit later), while adjusted EPS rose 17% to $2.90. In terms of adjusted EPS, Amgen's results topped the Street by a clean $0.30 per share. Meanwhile, Amgen's revenue was $210 million above the consensus.

Almost everything went right during Q1 for Amgen, and the following four points are a testament to that.

1. Mature-drug growth was very impressive
If there was one particular eye-opener for me during Q1, it was how much of an impact Amgen's mature products had on its results. Mature products, or those that have been on the market for many years, aren't expected to contribute more than a couple of percentage points of gains within a given year. Instead, Amgen saw big gains from the likes of chronic inflammation-reducing drug Enbrel, cancer-related bone strengthening drug Xgeva, and osteoporosis injectable Prolia.

Enbrel is Amgen's workhorse, providing 26% of its $5.24 billion in total product sales during the quarter. The majority of the 24% increase in sales of Enbrel during Q1 came from price increases, which is truly remarkable considering how competitive Enbrel's therapeutic indications can be. Xgeva's 11% sales improvement from Q1 2015, and Prolia's 29% revenue gain, were attributed primarily to higher demand for both products.

2. Operating margins are above target
On top of growing its product portfolio and pipeline, Amgen has been working hard to cut costs. In 2014, Amgen's management announced efforts to boost Amgen's operating margin from the high 30-percentile at the end of 2013 to greater than 50% by 2018. It planned to do this by improving production efficiencies, as well as laying off workers and shutting down select research-and-development facilities.

In total, roughly 20% of Amgen's workforce, or 4,000 jobs, were lost, saving a cumulative $1.5 billion per year. But these cost savings weren't being funneled to the bottom line. Some of it was merely being diverted to help pay the rising costs of phase 3 studies and drug launches.

Mind you, Amgen launched a half-dozen drugs in less than a year following the approval of Blincyto in Dec. 2014. Once these newly launched drugs have a faithful following of patients and physicians, marketing expenses can be weaned, and operating margin can begin to expand.

In Q1 2016, Amgen reported a 440 basis point operating-margin improvement over Q1 2015, to 54.6%. Stockpiling and order choppiness can affect margin pretty notably from one quarter to the next; but for the time being, Amgen is hovering at its goal of a much-improved operating margin.

3. Kyprolis continues to grow worldwide
The centerpiece of Amgen's $10.4 billion buyout of Onyx Pharmaceuticals, Kyprolis, gained a welcome label expansion from the Food and Drug Administration in July 2015 to second-line multiple myeloma from third line and up, and turned that larger patient pool into $154 million in sales in Q1. This was a 43% improvement from the prior-year period.

If there's something worth watching here (and no, this isn't the eyesore that we'll be discussing below), it's that international sales provided all of Kyprolis' sequential quarterly growth. U.S. sales actually fell $5 million from the fourth quarter, which also happens to be when Johnson & Johnson's (JNJ 1.13%) and Genmab's third-line and higher-multiple myeloma treatment Darzalex hit the market.

As I've opined previously, although Kyprolis and Darzalex have never gone head-to-head in a study, both were approved by the FDA based on eerily similar phase 3 studies involving multiple myeloma patients who'd progressed on a median of five prior therapies. In those studies, Darzalex offered a slightly higher response rate (29% to 23%) than Kyprolis, and that could be eating into some of Kyprolis' third-line and up market share. Johnson & Johnson and Genmab fully intend to expand Darzalex's use to earlier stages of treatment, which Amgen investors will want to closely monitor.

4. Stock buyback in full force
Finally, Amgen keeps rewarding shareholders for their patience with the company's long-term strategy. Having already upped its dividend to $1 per quarter -- its fifth dividend hike of around 30% since 2011 -- Amgen announced that it had repurchased 4.7 million shares of common stock during the quarter, worth about $690 million. This leaves Amgen and its board about $4.2 billion to continue to repurchase its common stock.

As a reminder, buying back stock can reduce the number of shares outstanding, thus having a positive effect on EPS, and possibly making a stock's valuation look more attractive in the eyes of Wall Street and investors.

Amgen's lone eyesore
As noted above, Amgen did offer one eyesore in its report: sales of Repatha.

If there was a consolation here, it's that poor sales of competing PCSK9 inhibitor Praluent, developed by Sanofi (SNY 1.96%) and Regeneron Pharmaceuticals (REGN 0.72%), pretty much cautioned investors to expect disappointing results out of Repatha. After Praluent racked up a meager $10 million in sales in Q1, Amgen's Repatha totaled just $16 million.

The concern is the price point for these LDL-cholesterol-lowering injections. On a wholesale basis, we're talking about $14,600 annually for Sanofi and Regeneron's Praluent, whereas Amgen's Repatha comes at the "oh-so-cheap" wholesale cost of $14,100 annually. It's very likely insurers are getting discounts from these wholesale levels, but when the typical cholesterol-fighting medicine can run 90% cheaper or more than PCSK9 inhibitors throughout the course of the year, it's been tough to convince physicians and consumers that Repatha (or Praluent) is right for them.

The big test will come during the second half of this year when Amgen will announce the results of its long-term cardiovascular trial with Repatha. If Repatha demonstrates a statistically significant reduction in cardiovascular events and/or death from its long-term study, the value-benefit ratio for this new class of LDL-C drugs could shift dramatically, and their sales could improve. We should know a lot more later this year, but for now, PCSK9 inhibitors launched out of the gate with a whimper rather than a bang.

Value investors take notice
Repatha aside, Amgen's Q1 results demonstrate that the company is right on track to meet its long-term goals of improved operating margin and boosting shareholder value. Amgen has a robust pipeline of biosimilars in the works, and the vast majority of its existing product portfolio shined during the quarter. With a forward P/E of 13, a 2.5% dividend yield, and recently upped sales and EPS guidance for fiscal 2016, value investors would be wise to give Amgen a closer look.