Please ensure Javascript is enabled for purposes of website accessibility
Log In Help Join The Motley Fool
Free Article Join Over 1 Million Premium Members And Get More In-Depth Stock Guidance and Research
By Tyler Crowe - May 3, 2016 at 4:10PM

It hasn't been much worse than this for rig companies, but Helmerich & Payne still managed to pull down a profit in this rough market.

For the past few quarters, people in the energy industry have been waiting with baited breath for a recovery to start to materialize, but the downturn just keeps getting worse. Declining rig demand has really taken its toll on rig contractors, but Helmerich & Payne (HP -0.18%) continues to post profits in this rough operating environment. Let's take a look at how Helmerich & Payne did this past quarter and what management expects to see in the near future.

What is surprising about Helmerich & Payne is that the company has been able to preserve the integrity of its balance sheet despite such large declines in net income. At the end of this most recent quarter, the company was able to generate $169 million in free cash flow after dividend payments. This allowed the company to increase its cash holdings to $898 million and gives the company more than enough cash on hand to cover its $493 million in total debt outstanding.

The (no so) highlights
The first thing to consider when looking at Helmerich & Payne's earnings release is how challenging it is to be in the rig business these days. One chart that sums it up is the U.S. active rig count. At 443 active rigs across the U.S., there are now fewer rigs in the field than during the last supply glut in the late 1990s, which was the lowest time since active rig counts were kept track of. 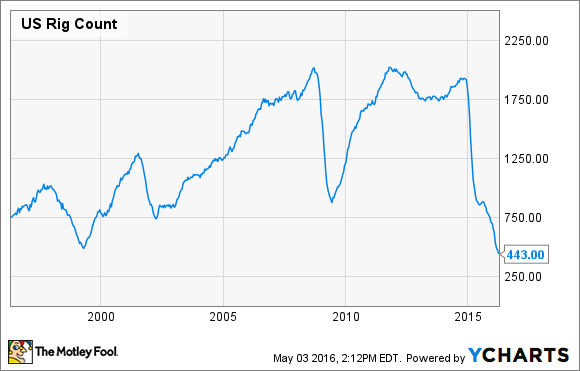 Under that backdrop, it's much easier to understand why Helmerich & Payne has struggled. In fact, you could even argue that the company's business has held up rather well considering the overall rig market has declined 75% over the past 18 months.

At last report, the company's U.S. land rig segment -- it's largest business by a long shot -- had a utilization rate of 31% compared to 68% this time last year. Similarly, its international land operations also saw utilization rates decline to 38%. What is slightly surprising, though, is that the average margin for a rig in use increased between this quarter and the same time last year. Much of that has to do with revenue related to contract early termination fees.

From the mouth of management
There isn't much a company executive can say that is going to instill a lot of confidence in investors, but in a press release CEO John Lindsay did highlight the fact that the company has remained profitable thanks to its fleet of high end rigs:

These are demanding times in the energy service space, and the challenge for many is now one of survival.   The U.S. land rig count is comparable to the all-time record lows reached in 1999.  Sharp reductions in personnel, expenses, and investments are occurring worldwide, and we expect to see further deterioration in terms of drilling activity during the third fiscal quarter. But even if this difficult environment persists, we believe that H&P's competitive and financial positions remain very strong.  Our long-term contracts have allowed the Company to remain profitable and protect FlexRig®* investments.  We are able to focus energy on efforts that add value to our customers and help us to become even more efficient and effective as an organization.  Whether we see more declines in activity or a significant improvement in demand, H&P is well positioned to respond.

A look at the outlook
According to management's outlook for the upcoming quarter, total rig demand is expected to fall again and more companies negotiate early termination of their contracts with Helmerich & Payne. The company estimates an average of 84 rigs will be working in the quarter, down from the 94 this past quarter. Also, decreased overall demand and the competition to keep rigs employed will likely result in a decline in rig revenue per day. Its offshore and international rig segments are expected to see active rig days decline in the single digits while the average rig margin for both segments should remain flat.

The 10-second takeaway
Helmerich & Payne has faced a lot of challenging times in its close to 100 years in operation, but this recent downturn is up there on the list of most challenging times ever. The company continues to be modestly profitable during these tough times, which is an accomplishment in and of itself, but the continued decline in rig activity suggests things could still get worse before they get better. Investors should continue to watch to see how management can still keep its financial house in order while the market for rigs continues to decline.