It's been an interesting few weeks for self-proclaimed engineered biology leader Intrexon (NASDAQ:PGEN). Shares got whacked on April 21 after SeekingAlpha published the first of two articles from Spotlight Research. The article presented the case that Intrexon is a fraud, drawing parallels to Theranos, a blood testing company once valued at $9 billion that is now knee-deep in various federal investigations and lawsuits alleging the company and its founder lied about the underlying technology. Investors would be hard pressed to find a more alarming analogy.

Intrexon fired back the next day with a press release -- a rare move for any company -- promising legal action if necessary. Shares didn't react as harshly when the second article published one week later, but they've yet to recover from the fallout. 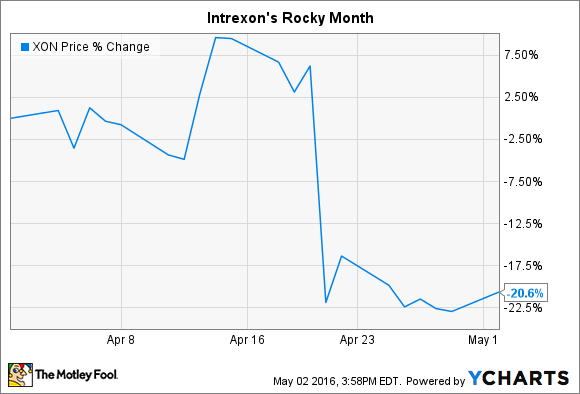 This recent war of words puts investors in a very difficult position. Is there any truth to reports of fraud, or is this an attempt to manipulate the stock, as Intrexon alleges? Should investors trust the detailed research report or the billionaire-led company?

Good news! I recently read the full 90-page report so you don't have to, in addition to tapping into my network of investors, scientists, and entrepreneurs in the field of engineered biology to better understand the allegations. Here's my take on recent events, distilled down to the central question facing investors: "Is Intrexon a viable business?"

Acquired revenue 1, Organic revenue 0
While there are some misrepresentations and errors in the report, it also sheds light on some pretty damning evidence supporting several arguments -- namely, that Intrexon's core technology suite, consisting primarily of molecular biology tools for cell and organism engineering, has yet to contribute in any meaningful way to, well, anything. The lack of use is actually among the worst-kept secrets in the engineered biology field -- the technology hasn't had nearly the impact one would expect from a market leader, despite what the company continuously touts.

Instead, substantially all of Intrexon's revenue to date has come from acquisitions -- none of which uses tools in the company's in-house technology portfolio. To be fair, the acquisition-heavy strategy has shown early promise as far as investors are concerned. The company's cattle breeding and genetics platform, Trans Ova, has driven remarkable revenue growth since being acquired in mid-2014 and accounted for 49% of total revenue in 2015. 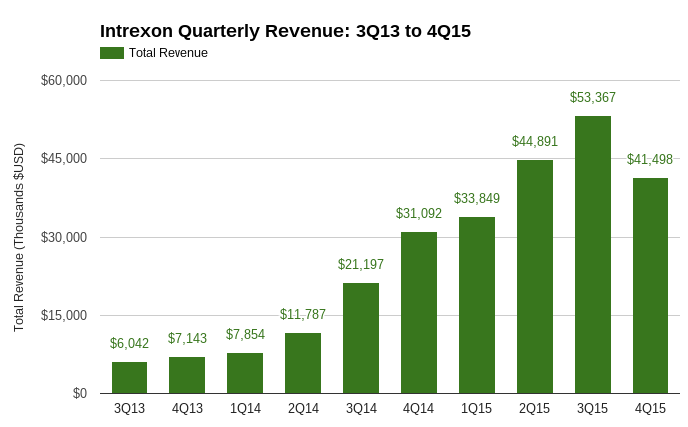 Other acquired platforms range from insect-based animal feed to non-browning apples; from Atlantic salmon that grow to full size in half the time to controlling insect pests with genetic engineering; and from pet cloning (really) to developmental CAR-T cancer therapeutics. These acquisitions are real companies, often comprising pioneers or leaders within their respective markets. Although most are years away from generating significant revenue for various technical (still in development) and non-market (regulations, public perception) reasons, the potential for revenue growth is amazing.

On one hand, Intrexon could make a name for itself by serving as a holding company of acquired biology-based technology platforms that it scales and grows without any input from technology developed in-house. Companies have successfully executed this strategy in other industries, and Wall Street probably doesn't care if revenue growth comes from acquisitions or organic, in-house initiatives.

On the other hand, questions remain about the core technologies, which are supposedly key to enabling significant future potential revenue growth by aiding the development of various products in the pipeline today. Even if the technical and financial impact remains in doubt, it does seem that the in-house technology portfolio contributes in a meaningful way to one thing: the story presented to investors.

Intrexon's misleading storyline
In addition to selling cattle breeding products and services, Intrexon sells a story. The company has positioned itself as a company leading the charge in the field of engineered biology. The vision: leverage biology as technology with as many shots on goal as possible. The company enters into partnerships with or acquires companies spanning healthcare, energy, agriculture, chemical manufacturing, and other markets; applies its "expertise" in the field to develop novel products; and hopes to generate shared or direct revenue from commercialized products. Risk is spread across dozens of partnerships and acquisitions in the pipeline such that investors are insulated against any single failure.

The story is certainly intoxicating. It's fueled by hyped-up press releases (one, announcing an acquisition, was simply titled "Living Biofactories in Your Prescription Bottle?"), hand-waving presentations at major conferences and on major news channels, and a healthy dose of complex transactions and partnerships. Selling the story has helped Intrexon to have a successful IPO, close large financing rounds, and earn major endorsements from financial pundits. It has allowed Intrexon to finance its existence and at least one dozen acquisitions, even if few investors can realistically hope to understand the complex nature of the business.

Unfortunately, hype and complexity result in a dangerous combination for investors. Hype can blind investors to the risks of complexity, while complexity requires investors to have some degree of faith that what they don't understand is understood by others. That's not always the case. Financial advisor and columnist Josh Brown recently wrote about complexity related to Valeant Pharmaceuticals and Ocwen Financial, which came crashing down to Earth after being exposed for misrepresenting operations:

"Both were highly complex stories with layers of financial engineering and the perception that management was too smart for the room. Both served up billions in investment losses for some of the most revered fund managers of our era when it turned out that the complexity was deliberate on the part of management rather than incidental to the story."

This isn't to say that Intrexon is the next Valeant or Ocwen. To me, it seems that acquisitions are Intrexon's way of acknowledging that it needs to strengthen a weak in-house technology portfolio and grow revenue now as more time-intensive businesses in healthcare and energy are developed. I don't think Intrexon's billionaire founder and CEO R.J. Kirk has anything to gain by building a fraudulent company, even if he does appear to manipulate Wall Street with hyped-up storylines to get his way from time to time. Of course, this still begs important questions, such as:

I don't have any answers. In the end, without more transparency from management there is little that can be said to reassure investors that the risk facing them now is worth taking.

What does all this mean for investors?
Whether investors want to admit it or not, the recent SeekingAlpha report makes several arguments that I've distilled to the fundamental issues and should be fully considered. Despite its $3 billion market cap and the hype surrounding the company, I cannot point to a single in-house developed technical advantage that Intrexon has over any of its competitors. Nor can anyone in the engineered biology field because, simply put, one doesn't exist.

Then again, acquisitions add real technologies, tools, and platforms that can be exploited in the future. There's nothing wrong with being a conglomerate of biology-based products, but that hasn't exactly been the storyline fed to investors to date. This doesn't mean Intrexon is a house of cards that will come crashing down tomorrow (though it could), but the company certainly has some explaining to do on its next quarterly conference call on May 10. Until important questions are answered I would recommend steering clear of Intrexon. If you own shares, then carefully consider the above and make a decision based on your own appetite for risk. I personally will be selling my shares in the company in compliance with The Motley Fool's trading restrictions.