Please ensure Javascript is enabled for purposes of website accessibility
Log In Help Join The Motley Fool
Free Article Join Over 1 Million Premium Members And Get More In-Depth Stock Guidance and Research
By Brian Feroldi - May 4, 2016 at 8:22AM

It was a transformative month for the clinical-stage biopharma.

What: Investors in ACADIA Pharmaceuticals (ACAD 1.99%) had another great month: The central nervous system-focused biopharma's shares tacked on another 12.7%, according to data from S&P Global Market Intelligence. That massively outpaced the returns of the biotech sector in general, as the iShares Nasdaq Biotechnology ETF actually declined over the same time frame. 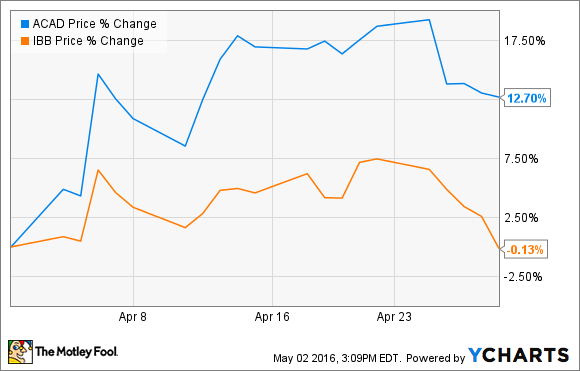 So what: Traders continued to bid up shares throughout the month as Nuplazid's May 1st PDUFA inched closer.

It turned out that investors got the news they were hoping for a few days early; the FDA officially gave Nuplazid the green light on April 29th.

Now what: Acadia recently held a special investor call to share more information about their commercialization plans for Nuplazid. The company has already hired 132 neuroscience sales specialists that will target 11,000 key physicians who are believed to see a lot of patients who have been diagnosed with PDP.

Acadia plans to release pricing information for Nuplazid prior to the drug's June lunch.

In addition, the company stated they will be submitting Nuplazid for regulatory review in Europe in the first half of this year. Management has not yet decided if they want to find a partner to help them commercialize the drug internationally.

Receiving regulatory approval for their lead compound was a transformative step for Acadia. However, there is still plenty of risk here. The company still has to educate the marketplace about Nuplazid's benefits and secure nationwide reimbursement.

Still, given that there is a huge unmet medical need for patients with PDP, I think the medical community will welcome Nuplazid with open arms. Acadia also has about $490 million in cash on its balance sheet, so it has ample liquidity to launch the drug successfully.

Will Acadia be able to successfully transition from a clinical-stage company into a commercial enterprise? Investors will have to wait a few more quarters before they will have an answer.