Please ensure Javascript is enabled for purposes of website accessibility
Log In Help Join The Motley Fool
Free Article Join Over 1 Million Premium Members And Get More In-Depth Stock Guidance and Research
By Daniel B. Kline - May 5, 2016 at 11:53AM

Sometimes what looks bad on paper is not really worth getting upset about, but the market tends not to subscribe to that idea.

Vera Bradley (VRA 0.92%) released its annual report at the end of March, which sent its stock plunging downward.

What: Even though it merely confirmed what had already been reported in the company's Q4 earnings report, the release of the handbag, luggage, and accessories company's annual report clearly did not please the market. It was released on March 29, 2016, which coincided with the company's share price going in the wrong direction, though it did take a couple of days for the big plunge to happen.

The stock price stood at $20.01 at market close on March 29 and finished the month on March 31 at $20.34, at which point the market seemed to have digested the bad news. From that $20.34 March close, the stock dropped steadily in April, closing out the month at $17.54, a 13.8% drop, according to data provided by S&P Global Market Intelligence. 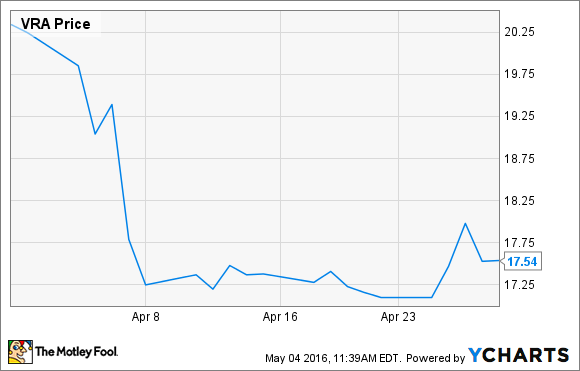 Now what: The share price fell in April for short-term thinking reasons. The company is in the midst of a multi-year repositioning of its brand, and CEO Robert Wallstrom sounded very confident that the plan was on track in the company's Q4 earnings release. He noted that the numbers for the quarter were within guidance. He also expressed strong hope for better results going forward.

"We took a very disciplined approach to enhancing gross profit in fiscal 2016, and we are especially proud of our 370 basis point gross profit percentage increase for the year," he said.

Realistically, nothing happened during the company's fiscal 2016 to make investors think the long-term turnaround plan won't work, Wallstrom hit his numbers, and the company made strides toward changing its distribution and its brand positioning. As a shareholder, April was a bad month, but if you had faith in the multi-year plan, then you should still believe.