The market is back in positive territory for the year, but there are still plenty of buying opportunities out there. 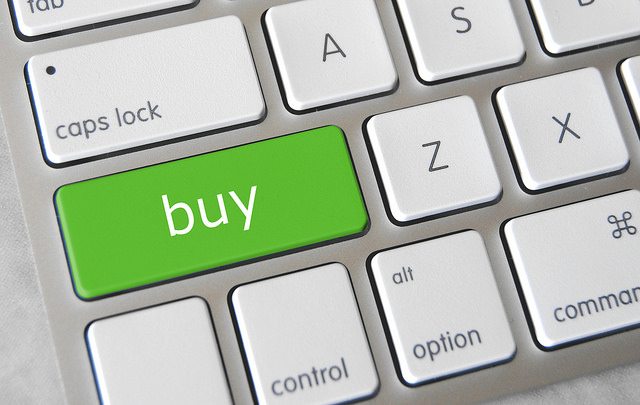 "Sell in May and go away" is a well-known adage on Wall Street. Those who follow the saying believe that the summer months are a bad time to own stocks so they attempt to time the market by selling out of their stocks in May and getting back in during the fall.

We Fools believe that trying to time the market is a sure way to lose a bundle, so we prefer to focus our attention on buying great companies at good prices and simply holding on to them for the ultra long term.

Below, our contributors highlight stocks that they think are compelling buys right now.

George Budwell: I think the Israeli-based drugmaker Teva Pharmaceutical Industries Ltd. (TEVA 1.08%) could be a nice pickup in May. After all, Teva is scheduled to release its first-quarter earnings on May 9, which could turn out to be a major inflection point for the stock.

While Teva's quarterly figures aren't expected to be pretty due to the impact of generics on the company's multiple sclerosis drug Copaxone, management should update investors on the $40.5 billion purchase of Allergan's generic drug business during the accompanying conference call. As a refresher, this massive deal was supposed to close in the first quarter of 2016, but was later pushed back after the U.S. Federal Trade Commission asked Teva to sell off certain products and pipeline assets for antitrust purposes.

The bottom line is I believe Teva will disclose significant progress made toward meeting the FTC's requests come May 9, putting this deal on track to close sometime in June. Once this deal goes through, Teva will become one of the world's largest drugmakers, thereby allowing it to dampen the generic threat to its biggest revenue source, Copaxone, in the process.

Neha Chamaria: You wouldn't expect a company that incurred a loss in its last quarter to make it to this list, but Paccar's (PCAR 0.79%) a different case altogether. The biggest argument against it right now is a slowdown in the North American trucking markets. While that did hurt the truck maker's deliveries last quarter, it had nothing to do with the losses, long pending, of $594.6 million that were a result of the fines paid to the European Commission as part of long-pending investigations that have hurt nearly every top truck manufacturer in Europe.

In fact, Paccar is rapidly gaining market share in Europe, hitting a record of 16.6% in the heavy-duty segment last quarter. It is already a dominant player in the U.S. with roughly 27% of the heavy-duty market under its belt. Meanwhile, Paccar is smartly becoming self-reliant as it replaces Cummins' engines with its own across its fleet -- its engine penetration grew by 4 percentage points sequentially to 46% in Q1.

A leadership position, expanding margins, vertical integration, and a sturdy balance sheet position Paccar for solid growth when the cycles turn. The best part is that you can be part of the growth story pretty cheaply today: Despite its recent rally, Paccar is trading at only 13 times trailing earnings, which is a significant discount to its own five-year average P/E of 18 and average P/E of 19 for companies in the S&P 500. You sure don't want to miss this bus, er, truck.

Andres Cardenal: PayPal (PYPL 2.01%) is a market leader in digital payments, a remarkably compelling industry offering enormous potential for growth in the years ahead. Management estimates that PayPal's market opportunity is worth around $2.5 trillion when considering both online and mobile digital payments, and this should provide plenty of room for expansion over the long term.

The company is truly firing on all cylinders, total revenue during the first quarter of 2016 was $2.54 billion, a big increase of 19% in U.S. dollars and an even bigger jump of 23% on a constant currency basis. Earnings per share amounted to $0.3, growing by 43% versus the first quarter in 2015.

Total payment volume was $81 billion, up by 31% on a constant currency basis. PayPal ended the quarter with 184 million active accounts, gaining 4.5 million new accounts during the period. The company processed 1.4 billion transactions in the quarter, growing by 26%.

The network effect is a crucial source of competitive strength in the payments industry. Both customers and merchants attract each other to the most accepted and trusted payment platforms. The bigger PayPal gets, the more valuable the service, and this is building a self-sustaining virtuous of growth and increased value for users.

Brian Feroldi: The S&P 500 may have fully recovered from its rough start to the year, but the biotech sector has largely been left out of it. One of my favorite companies from the sector -- Ionis Pharmaceuticals (IONS 1.52%) -- has been hit particularly hard. 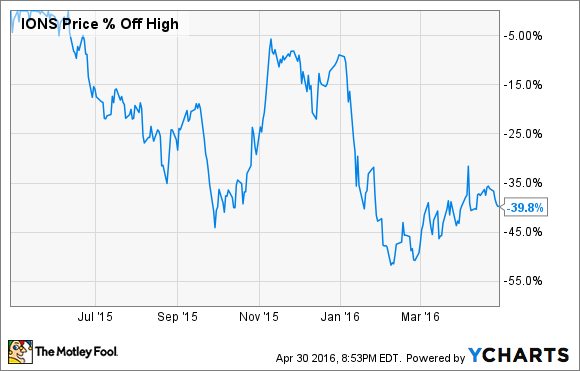 So why do I think this stock is a buy? Three primary reasons:

First, Ionis has developed a cutting-edge RNA platform technology that it has used to build out one of the most impressive pipelines in all of biotech. The company currently boasts more than three dozens drugs in clinical study, with nine of them in phase 3 trials. The sheer breadth of this company's pipeline makes it a much lower risk investment than other clinical stage biotechs.

Second, the company is in tip-top financial shape, with $775 million in cash on its books. While spending should increase as its pipeline matures, Ionis still believes that it will end 2016 with $600 million in cash.

Finally, Ionis has made believers out of some of the biggest companies in all of pharmaceuticals and has already inked partnership agreements on 21 of its drugs. That lends a great deal of credibility to its technology, and if all goes well from these partnerships, Ionis could earn over $8.5 billion in future milestone payments and licensing fees.

Ionis has numerous catalysts coming over the next few years as it transitions from a clinical-stage company to a commercial one. With so many irons on the fire, I think its chances of success are solid, which is why I think Ionis is a top pick for any investor who is willing to stomach an above-average amount of risk.

Evan Niu, CFA: I think there is a very strong possibility that people will look back in hindsight and wish they had bought LinkedIn (LNKD.DL) at these prices. After the professional networker got utterly demolished by 40% following a disappointing earnings release earlier this year, the company just reported earnings that show that the business is stabilizing in all the right ways.

Revenue jumped to $861 million, driven by a surge in Talent Solutions revenue. Adjusted earnings per share also jumped to $0.74. The first quarter was the strongest quarter of net member additions in years, and LinkedIn now has 433 million total members. Engagement is up, with page views per unique member hitting an all-time high. Members are welcoming the newly redesigned mobile app as well, which was launched late last year.

While guidance was a source of disappointment last time around, it came in strong this time. Second-quarter revenue is expected in the range of $885 million to $890 million, easily beating the consensus estimate of $828 million. The better-than-expected figures suggest that the February sell-off was overdone.

Jason Hall: Meritage Homes Corp. (MTH 1.93%) just reported first-quarter earnings, and the market reacted less than favorably to what was a very good financial performance. Earnings per share were up 25%, home closing revenue was up 15%, and the company's backlog of homes ordered was up 16% from one year ago.

What pushed the stock down 12% since earnings? Short-term things that have the market overly concerned. Gross margin percent was down 110 basis points from one year ago due to higher land and labor costs, and the company's order volume in the quarter was essentially flat year over year. It also ended the quarter with fewer total land lots owned than it did a year ago, too.

But Meritage is in very good shape for the long run. Management said that land and labor prices are no longer going up faster than home prices, and gross margins should return to 2015 levels in the second half of 2016.

Furthermore, Meritage's growth strategy includes building more entry-level properties. On the surface this may sound like a backwards move, but there's evidence that this is the most underserved segment of the housing market, with huge pent-up demand as more millennials enter the workforce, start families, and buy homes.

Add it all up and the market's short-term reaction has created a nice opportunity for long-term investors. Meritage Homes is a great stock to buy in May.

Sean Williams: If investors want something truly off the wall to consider for May, I'd suggest that mining royalty interest giant Silver Wheaton (WPM 1.31%) is worth a closer look.

What sets Silver Wheaton apart from traditional mining companies is its business model. Instead of investing billions in equipment and dealing with fluctuating labor costs, Silver Wheaton lends to miners in need of cash to expand or build out gold or silver mines. In return, Silver Wheaton gets long-term or length-of-mine contracts for a specific amount of annual production at a low fixed cost. In other words, unless metal prices get massacred, Silver Wheaton remains profitable; and its cash flow remains generally predictable (although it is at the mercy of the production from its more than a dozen long-term contracts.

In particular, investors will probably be enamored with Silver Wheaton's margins. As of the end of fiscal 2015, its average cash costs were $4.17 an ounce for silver and $393 an ounce for gold. Mind you, silver recently closed at roughly $17 an ounce, and gold was pushing $1,240 an ounce. This means any movement higher in either precious metal is going to have a more direct impact on Silver Wheaton's bottom line than any other gold or silver miner. It also has an impact on Silver Wheaton's dividend, which is currently paying out about 1%. The higher metal prices go, the more lucrative that dividend payment can be.

Silver, on the other hand, should be getting a boost from an increase in solar demand. As a top-tier heat and electric conductor, silver is a critical physical component to solar panel production.

The mining industry looks to be getting its luster back, and Silver Wheaton could be a prime beneficiary.