Please ensure Javascript is enabled for purposes of website accessibility
Log In Help Join The Motley Fool
Free Article Join Over 1 Million Premium Members And Get More In-Depth Stock Guidance and Research
By Reuben Gregg Brewer - May 7, 2016 at 9:11AM

National Grid is a “global” utility, but it kind of isn't -- that's the biggest problem here.

National Grid Transco, PLC (NGG -0.41%) is a UK utility with a base of assets in the United States. This is both a strength and a weakness, depending on your take of things. But in the end, getting your head around this diversification is the biggest problem investors will have with National Grid.

Really diversified?
France's Veolia Environnement SA (ADR) (VEOEY 1.31%) is a utility with operations, quite literally, around the world. It runs water, waste, and power assets in some 44 countries located in South America, North America, Europe (its largest market at about half the business), Africa, the Middle East, Oceania, and Asia. Now that's a globally diversified business. And if you are looking for a single utility to buy to gain exposure to the world, Veolia should be on your short list.

National Grid operates in the United Kingdom and the in the northeastern United States. True, its businesses span across electricity and natural gas, but it's a very different level of diversification. In fact, the UK wouldn't even count among the top 10 states in the U.S., in terms of size. So it's hard to suggest that National Grid is really a globally diversified utility -- it's a UK utility growing in the U.S. market.

Diversification or unnecessary complexity
But, if you look at the UK as akin to a reasonably large U.S. state, you can pit National Grid against large U.S.-focused utilities, such as Southern Company (SO -0.61%) and Duke Energy (DUK -0.04%). In fact, it ranks well with this pair when you look at market cap and dividend yield. But for an investor, that's not a great fit, either. 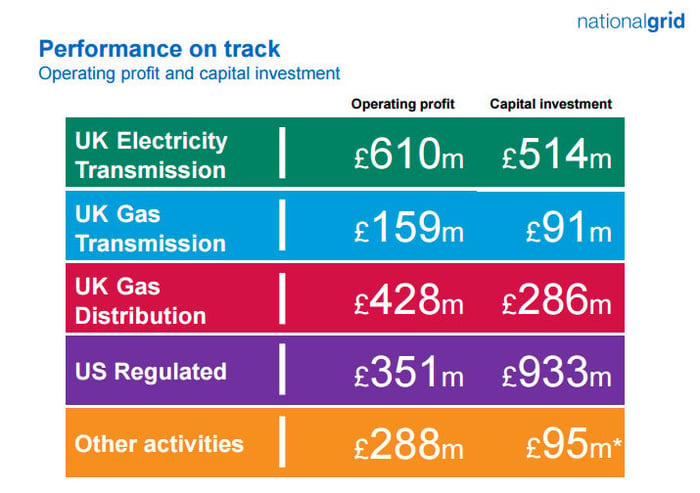 The United Kingdom isn't all that big, but it's still a foreign nation and accounts for a large piece of National Grid's business -- roughly two thirds of the company's operating profits! And while the company is planning on expanding its U.S. business to push the accelerator on growth, what happens in the UK is clearly important. You just can't look at National Grid without getting to know the electricity and gas markets in the United Kingdom pretty well.

That's why you need to ask yourself if National Grid's foreign exposure is worth the effort and risk. You can buy a diversified U.S. utility of roughly similar size offering a similar yield, such as Duke or Southern, and avoid the need to deal with, and understand, foreign markets. But if you want foreign diversification, National Grid only really offers up exposure to the United Kingdom. If foreign exposure is your real goal, Veolia is a much more diversified entity.

Is the big problem worth it?
When you invest in a company, you have to get your head around the big picture, both for the company and how it fits into your portfolio. For National Grid, the big picture is a U.K. foundation supporting U.S. growth. That's neither good nor bad, but it means that the utility probably won't be a clean fit for most portfolios. Indeed, it's not really domestic, and it offers only a little bit of foreign diversification.

If that's not an issue for you, then by all means get to know the U.K. utility space a little better and buy National Grid. If what you want is a sleep-well-at-night utility investment, then you'll probably be better off with a large U.S.-only utility such as Duke or Southern, avoiding the complexity that National Grid throws into the mix. And if what you really want is a globally diversified utility, then a company such as Veolia, with operations around the world, will be a better fit.

In the end, National Grid is a fine utility, but still something of an odd duck. And the "foreign" exposure it offers might not be worth the extra leg work for many investors.