Please ensure Javascript is enabled for purposes of website accessibility
Log In Help Join The Motley Fool
Free Article Join Over 1 Million Premium Members And Get More In-Depth Stock Guidance and Research
By Cory Renauer - May 9, 2016 at 12:18PM

A stellar earnings report pumped up shares of the cardiac device specialist.

What: Shares of Boston Scientific Corporation (BSX 1.99%), an interventional medical device specialist, popped 15.5% in April, according to data from S&P Global Market Intelligence. A strong first-quarter earnings and improved outlook provided the boost. 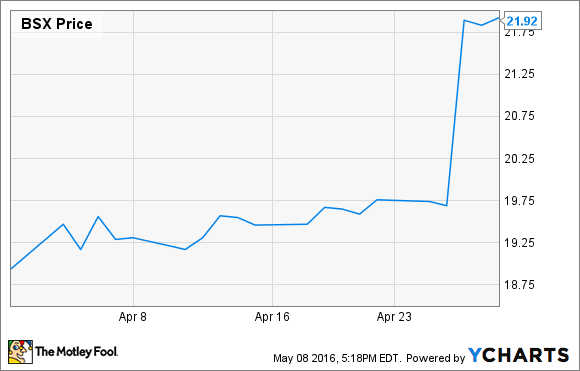 So what: The company is off to a roaring start this year. Total first-quarter revenue was 13% higher, and when excluding the impact of a recent acquisition, organic revenue grew 8% compared with the same period last year.

Four of the company's seven business segments grew revenue by double digits, leading to a 24% gain in operating profit.

A more optimistic outlook for the rest of the year is what excited the market the most. The company boosted annual revenue growth guidance from between 4% and 7% over 2015 to between 6% and 8%, excluding the recent addition of the male urology portfolio it just bought from Endo International for about $1.6 billion.

Management also expects its adjusted operating margin to widen an extra 0.5% to 24.5%, which sounds awfully good for a company with operations that have ended most of the past 10 years in the red on a GAAP basis.

Now what: Competition in the medical-device business is intense, and size confers an advantage. With about $7.7 billion in trailing-12-month revenue, Boston Scientific isn't a small fry, but compared with a giant like Medtronic, it's struggling just to keep its head above water.

If Abbott can complete its announced acquisition of Boston Scientific's competitor St. Jude Medical, it will have another device juggernaut with more than $25 billion in annual revenue to contend with. 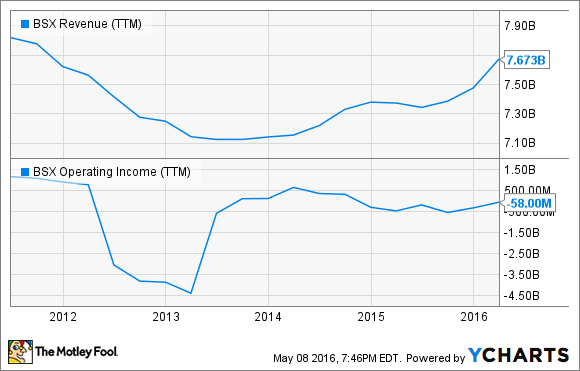 Boston Scientific has slowly been returning to top-line growth through acquisition -- which entails a great deal of execution risk. A few wrong moves, and this company could find itself in some trouble.

If you strip away the $12.5 billion in goodwill and other intangible assets from Boston Scientific's balance sheet, its tangible asset value of less than $5.2 billion is a bit less than the $5.4 billion in long-term debt it's carrying. If that doesn't send a chill down your spine, I don't know what will.

If you're committed to holding shares of this device maker, I'd recommend focusing on management's adjusted figures. 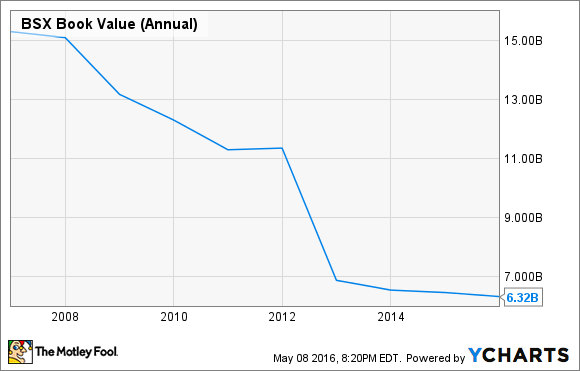 Otherwise, you might notice you're stuck with a growth stock that isn't growing.