Please ensure Javascript is enabled for purposes of website accessibility
Log In Help Join The Motley Fool
Free Article Join Over 1 Million Premium Members And Get More In-Depth Stock Guidance and Research
By Brian Orelli, PhD - May 9, 2016 at 3:21PM

It's a biotech thing.

So what: Since Rintega failed its phase 3 trial in March, Celldex's share price movement has generally been in sync with the index but more extreme in both directions. That's pretty typical for many biotechs; the further out the next binary event is, the more likely a company's short-term movements will be based on sentiment rather than fundamentals. 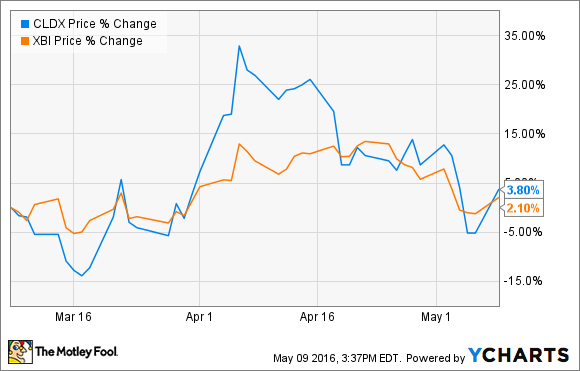 Now what: Investors will have to wait for data from ongoing phase 2 trials to see a value inflection. Celldex recently completed enrolment in a phase 2 trial testing glembatumumab vedotin in metastatic melanoma and is still enrolling a phase 2b trial in patients with metastatic triple-negative breast cancers. It also recently started a phase 2 trial combining another cancer drug, varlilumab, with Bristol-Myers Squibb's (NYSE: BMY) Opdivo.

Celldex ended the first quarter with $254 million in the bank, which management thinks should be enough to complete the current trials and begin new ones. If the current trials are successful, the valuation will hopefully be higher, resulting in less dilution from a secondary offering, or a better partnership deal if the company ends up licensing one or both of the drugs to a larger drug company.