Please ensure Javascript is enabled for purposes of website accessibility
Log In Help Join The Motley Fool
Free Article Join Over 1 Million Premium Members And Get More In-Depth Stock Guidance and Research
By Matthew Frankel, CFP® - May 10, 2016 at 5:02PM

It seems that HCP has redeemed itself for its dismal fourth quarter earnings.

Healthcare real estate investment trust HCP (PEAK -2.11%) announced first-quarter earnings that met expectations, but with one big surprise for shareholders. After posting a loss last quarter thanks to a writedown at its HCR ManorCare unit, the company has decided to spin off that part of its business into a newly created REIT and focus on its core business. Here are the details of HCP's quarter, and what shareholders need to know about the spinoff.

A solid first quarter
As I mentioned, HCP's fourth-quarter results were nothing to write home about. The skilled nursing business has been struggling, and it led to net asset writedowns of $810.9 million. Shares got hammered as a result and plunged 15% the day after the announcement. 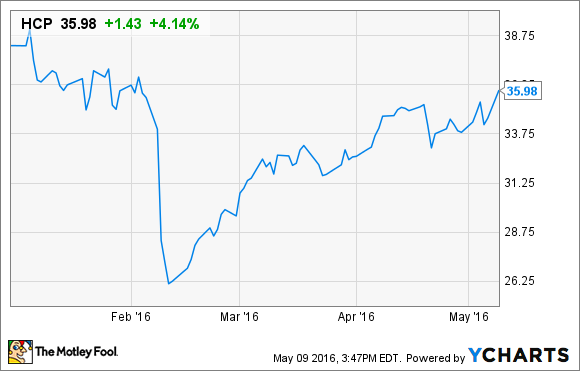 The first earnings report of 2016 had the opposite effect -- a positive surprise for investors. We'll get to the spinoff in a minute, but HCP reported adjusted FFO that met analysts' expectations of $0.69 per share, as well as strong occupancy figures and strong investment activity. Investors were also pleased that HCP raised its 2016 FFO guidance from a range of $2.74-$2.80 per share to $2.76-$2.82.

This earnings season has been good to the healthcare REITs so far. Last week, sector-leading Welltower (WELL -0.35%) reported a 9% year-over-year increase in FFO, raised its dividend by 4.2%, and also announced favorable investment activity. Senior housing generated 5.5% same-store NOI growth, as the company's strategy of focusing on high-barrier to entry markets continues to pay off. In fact, Welltower has steadily risen since its earnings were announced, and is trading at a new 52-week high as I write this.

HCP: Before and after the spinoff
The big news of the quarter is that HCP's board has unanimously approved a plan to spin off its HCR ManorCare portfolio, which consists of post-acute and skilled nursing properties into a separate REIT, in order to let HCP focus on its core property types -- senior housing, life sciences, and medical office buildings.

The new REIT will have a portfolio of over 320 properties, mostly made up of HCR ManorCare facilities, although the exact assets to be spun off will be determined at the time the new REIT is created.

Basically, the idea is that by spinning off these assets and assembling a management team that can specialize in adapting to changes in the post-acute and skilled nursing businesses, HCR ManorCare will be in a better position to unlock value from these properties. According to HCP, there are some strategies that could maximize HCR ManorCare's portfolio that are either not available or not practical while these assets are held within HCP.

Meanwhile, HCP's portfolio quality will instantly improve, as the company will be primarily composed of private-pay assets. In addition, its financial position and stability will improve, which translates to benefits such as better availability of credit and a lower cost of borrowing. In a nutshell, the spinoff will allow each company to act in its own best interests, and should be a win-win situation for both REITs.

The company expects the spinoff to be completed during the second half of 2016, and HCP shareholders will receive shares in the newly formed REIT.

Should investors buy prior to the spinoff?
Of course, it would have been better to buy HCP before the spinoff was announced, but I still think the company is a solid buy after the post-earnings pop. The stock still pays a dividend yield of nearly 6.4%, and the demographics are extremely favorable for growth and opportunity going forward. As I've said before, HCP is a REIT that deserves to be held for the long haul, and the announcement of the spinoff reinforces that idea even more.