Please ensure Javascript is enabled for purposes of website accessibility
Log In Help Join The Motley Fool
Free Article Join Over 1 Million Premium Members And Get More In-Depth Stock Guidance and Research
By Cory Renauer - May 10, 2016 at 6:29AM

Despite beginning April with upbeat news, the stock gave back much of the previous month's gains.

What: Shares of Amicus Therapeutics (FOLD -2.97%), a biotechnology company at the forefront of rare and orphan diseases, slumped 14% last month according to data from S&P Global Market Intelligence. Despite beginning the month with with a positive opinion from European regulators, the stock gave back much of the previous month's gains. 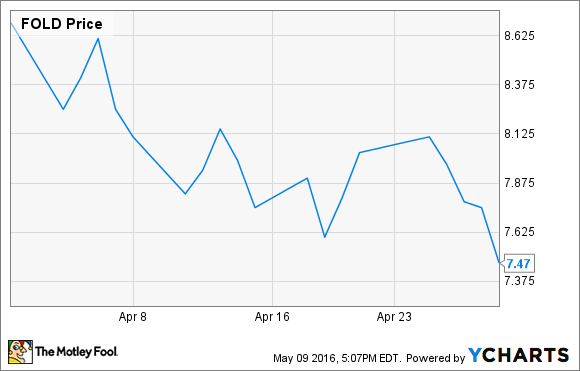 So what: In March, Amicus stock skyrocketed 23% after the company reported some positive late-stage data for its lead candidate, migalastat, for the treatment of some patients with Fabry disease. This disease is caused by a number of possible genetic mutations in the gene that produces alpha-galactosidase A, an enzyme vital to transport and storage of certain glycolipids within cells. A lack of the enzyme leads to widespread tissue damage, and left untreated it typically leads to an early and painful death at around 40 to 50 years of age.

In the U.S., the current standard of treatment is Sanofi's Fabrazyme, which is basically an enzyme replacement therapy that requires intravenous infusions every other week. As you can imagine, the infusions are horribly inconvenient.

Amicus' migalastat is a pill, designed to basically restore function to certain Fabry patients' existing enzyme, alpha-gal A, and get it to work, rather than replacing it. Last month, the shares climbed when the company reported a significant reduction of one of the glycolipids  alpha-gal A is supposed to remove from certain cells in an 11-patient trial, among other studies.

Without any other news to drag the stock down, I imagine investors spent April digesting the data and realized it's difficult to draw conclusions from such small studies.

Now what: Another reason this stock bounces around so much is that the addressable global patient population is poorly understood. In the U.S., there are an estimated 3,000 men with the disease, but the company has been somewhat cagey about when it intends to file an application with the FDA.

News of the positive opinion probably failed to lift the stock because in addition to Sanofi's Fabrazyme, if approved it will also contend with Shire's Replagal -- another enzyme-replacement therapy the FDA refused to approve without additional data, but available in the EU.

Amicus estimates the market potential of each of its three clinical-stage candidates at between $500 million to over $1 billion. Even at the low end that's awfully generous, given that nobody's sure what percentage of Fabry patients are amenable to migalastat therapy in the first place. Amicus' own estimates range between 30% and 50% of the overall Fabry population.

Although there's no particular reason for Amicus stock's slump in April, you can certainly expect more volatility ahead.