Please ensure Javascript is enabled for purposes of website accessibility
Log In Help Join The Motley Fool
Free Article Join Over 1 Million Premium Members And Get More In-Depth Stock Guidance and Research
By Jordan Wathen - May 11, 2016 at 8:26AM

If one of Buffett's favorite four-letter acronyms is "BNSF," one of his least-favorite words has to be "coal."

Berkshire Hathaway's (BRK.A -1.44%)(BRK.B -1.61%) railroad saw coal volumes deteriorate in the first quarter of 2016, leading to a 24% decline in operating profit for the railroad. Revenue fell by about 15% compared to the year-ago period.

Isolating what really matters
The moving parts on the income statement can make railroads something of a head-scratcher. A decline in fuel surcharges had a substantial effect on revenue, but a decline in coal volume resulted in the decline in profit.

It's the consequence of a quirk in how railroads pass on the high cost of fuel to their customers. BNSF charged fuel surcharges averaging about $53 per carload last quarter, down from about $196 per carload in the same period last year.

In other words, fuel prices have a huge impact on revenue from period to period, but they hardly move the needle on profits. Fuel surcharges fell to 2.7% of revenue in the first quarter of 2016 vs. 8.8% of revenue during the year-ago period. 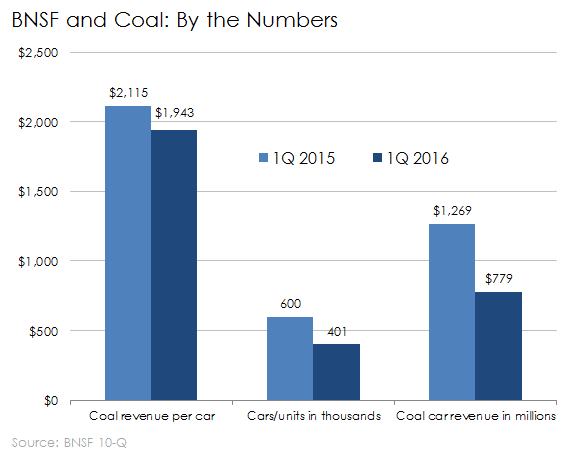 The problematic revenue declines
The revenue changes that really matter are the ones that come from declines in volume and revenue per car, adjusted for the change in fuel surcharges. This quarter, the problems aren't difficult to spot -- BNSF's coal volume declined by a whopping 33% from the year-ago period.

Declining coal volume remains one of the biggest long-term threats to the railroad industry. In his annual letter to shareholders this year, Buffett wrote that "BNSF, along with other railroads, is certain to lose significant coal volume over the next decade."

BNSF's first-quarter filings blame the decline in coal volume on higher customer inventories, low gas prices (natural gas is an alternative fuel source for coal power plants), and a decline in electricity generation due to a mild winter. Though the one-third decline in coal volume this quarter may be much more severe than one would expect over the next decade, it does show just how important coal is to railroad profits.