Please ensure Javascript is enabled for purposes of website accessibility
Log In Help Join The Motley Fool
Free Article Join Over 1 Million Premium Members And Get More In-Depth Stock Guidance and Research
By Evan Niu, CFA - May 11, 2016 at 1:45PM

Shares would likely bottom out if the Mac maker increased its buyback activity.

Apple (AAPL 1.62%) shares are now trading near two-year lows in the wake of the iPhone maker's first-ever decline in iPhone unit shipments. While investors fret over the possibility of peaking unit volumes, Apple should take advantage of the recent share weakness and dirt-cheap valuation. The company has been selectively opportunistic with the timing and magnitude of its share repurchases over the past few years.

It's time to do a bigger accelerated share repurchase program (ASR).

What is an ASR?

An accelerated share repurchase program is where a company buys back a large block of shares from an investment bank, which in turn borrows the shares from its clients or third-party lenders. The goal of these programs is to mitigate any potential market impact associated with buying a large volume of shares within a short period of time.

The programs typically last several months, and the total number of shares delivered under the program will vary depending on market fluctuations. Since the volume-weighted average price of the stock within the program's duration typically determines how many shares are ultimately delivered, it's true that ASRs don't necessarily allow a company to load up immediately at current prices. However, if the ASR commences at a time when prices are low, the volume-weighted average price will still be favorable.

To date, Apple has done six ASRs, the most recent one being just in the fourth quarter. However, the most recent ASR was fairly modest -- only $3 billion. Apple received an initial delivery of 20.4 million shares related to this ASR.

These ASRs have supplemented Apple's open market purchases quite nicely. 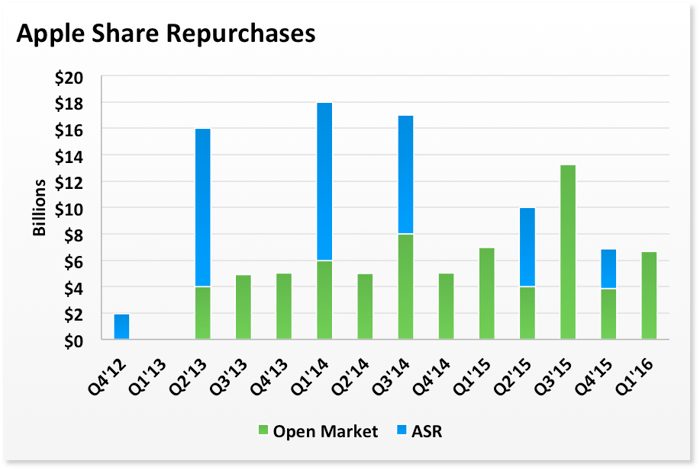 As Bernstein analyst Toni Sacconaghi recently noted, Apple shares have shown a strong correlation between share outperformance and increased buyback activity. Apple has never been shy about putting its money where its mouth is. CEO Tim Cook frequently expresses his belief that Apple shares are undervalued, and then proceeds to buy back a boatload of shares. The most recent instance was his recent appearance with Jim Cramer on Mad Money.

If Apple were to aggressively increase its buyback activity with an ASR, to the extent that total repurchases (including both open market and ASR) within a quarter were upwards of $12 billion to $14 billion, the company would very likely put in a bottom for share prices.