Along with its first-quarter earnings, healthcare REIT HCP Inc. (NYSE:PEAK) announced its plans to spin off its HCR ManorCare portfolio of skilled nursing and assisted living assets into a newly created REIT. The goals of the move are to allow HCP to focus on its core business, while allowing the new REIT to focus on unlocking maximum value from the HCR ManorCare assets. Here are the details on the spinoff, and what investors should know about HCP's future plans.

Spinning off more than 320 properties

HCP's board approved plans to spin off the company's HCR ManorCare properties, as well as certain other skilled nursing facilities, into a new publicly traded REIT that, for now, is being referred to as "SpinCo."

Currently, HCP's portfolio is diversified among senior housing, life science, medical office buildings, and post-acute care/skilled nursing care properties. After the spinoff, the focus will narrow to the first three property types, which HCP refers to as its core business.

The vast majority of the remaining portfolio will be comprised of private-pay assets, which translates to sites with high-quality cash flows that aren't dependent on government reimbursement. Not only that, but the three remaining property types have higher growth potential.

In a nutshell, the HCR ManorCare assets have been a drag on HCP, and the company wants to be cut loose from them. In theory, each of the post-spinoff REITs will be able to concentrate its efforts on a specific type of property, thus making it easier to maximize shareholder value.

Post-spinoff, HCP's overall portfolio quality and stability will immediately improve. This sets it up for easier and lower-cost borrowing, allowing it to take massive advantage of growth opportunities in the healthcare real estate sector as they come up. As I've written before, this is a $1 trillion, highly fragmented market, and it should grow in size tremendously over the coming decades as the U.S. population of senior citizens grows at a rapid pace. 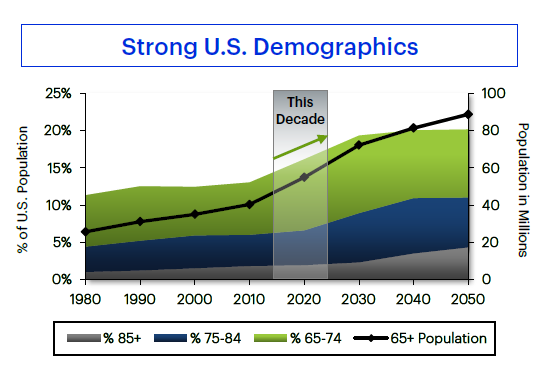 The company also expects to raise a total of about $2.75 billion from new financing related to the spinoff, as well as through asset sales, and plans to use those proceeds to repay its higher-interest debt, thereby strengthening the balance sheet.

For the spun-off assets, the mission is to maximize the value of the HCR ManorCare assets. According to HCP, SpinCo will be able to use some strategies that could not be undertaken while the properties are still held in HCP's portfolio. Plus, the new company will have a management team whose sole focus will be on skilled nursing and assisted living properties.

Finally, the company feels that there are simply two different types of investments here. As CEO Lauralee Martin said during the company's recent conference call, "... in HCP, our shareholders expect consistency." She went on to say that the investment thesis of SpinCo may be to "expect some unexpected." In other words, HCP will be the kind of stable, predictable REIT most investors in the sector love, while the newly created SpinCo will likely be a little more volatile. And, these two investment theses are best pursued independently.

What's next, and is the stock a buy?

HCP expects the spin-off to be completed during the second half of 2016, at which point HCP shareholders will receive shares in the new REIT. The number of HCP shares owned will remain constant.

As of this writing, HCP trades for just 12.2 times its 2016 funds from operations guidance, a remarkably low valuation for a REIT with HCP's record of consistent growth. I feel that HCP is a bargain now, even without the spinoff, and that the split creates some intriguing possibilities for value creation going forward.