Please ensure Javascript is enabled for purposes of website accessibility
Log In Help Join The Motley Fool
Free Article Join Over 1 Million Premium Members And Get More In-Depth Stock Guidance and Research
By Ashraf Eassa - May 12, 2016 at 11:30AM

There may be room for this graphics specialist to continue to see richer average selling prices in the coming years. 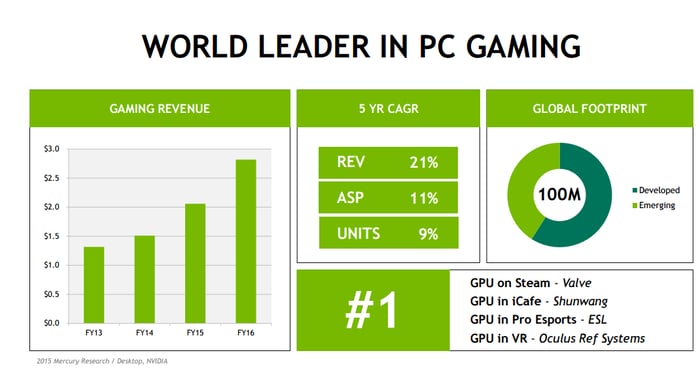 According to NVIDIA, the company's gaming-oriented revenue over the last five years has grown at a 21% compounded annual growth rate. This growth has likely been fueled by some combination of market share gains as well as growth in the total addressable market.

What I find particularly interesting, though, is that although the company has enjoyed unit growth over this five-year horizon, it has enjoyed even more robust growth in average selling prices (ASPs).

The question worth asking, then, is whether NVIDIA will be able to further bolster ASPs in the coming years. I think the answer to that is yes -- here's why.

At launch, the prior-generation GTX 970 and GTX 980 cards were offered at $329 and $549, respectively, with the latter card receiving a price cut to $499 some months after the launch.

What's even more interesting is that the 1080 Founders Edition is $50 more expensive than even the GeForce GTX 980 Ti -- NVIDIA's previous flagship -- when it launched last year.

Gamers are willing to pay for performance, and NVIDIA knows this

One of the reasons that the PC gaming market has been so good to NVIDIA is that games are continually requiring more and more horsepower in order to look their best. This means that gamers upgrade at a relatively rapid clip and, more important, are often willing to pay a bit more in order to get meaningfully more performance.

Even though the GTX 1070 is about $50 more expensive than the GTX 970 that it replaced (and $120 more than the NVIDIA-designed reference model of the 970), the performance is likely to be roughly on par with that NVIDIA was selling for $649 over the last year.

This means that even though NVIDIA has pushed up prices year over year for a given class of graphics processor, it's effectively bringing performance levels that were previously much costlier to obtain down to lower price points.

At some point I suspect there will be a ceiling for gaming-oriented graphics chip selling price increases. However, there does seem to be room for the graphics specialist to add products at higher performance/price points before the limit is reached.

For example, there's room for NVIDIA to introduce a product at the $999 price point (i.e., a next generation Titan product), and I could see a cut-down version of that Titan product slotting in at $799.

Heck, if NVIDIA is able to deliver enough performance, a product at a price point of even $1299, with a cut-down variant at, say, $899 could very well be tolerated.

At the end of the day, as long as NVIDIA can deliver significantly improved performance with each successive generation, it should be able to get paid commensurate with that performance.