Please ensure Javascript is enabled for purposes of website accessibility
Log In Help Join The Motley Fool
Free Article Join Over 1 Million Premium Members And Get More In-Depth Stock Guidance and Research
By Ashraf Eassa - May 16, 2016 at 9:30AM

InvenSense needs to either grow revenues significantly or scale back operating expenses.

Shares of motion processor specialist InvenSense (INVN) hit a new all-time low in the May 13 trading session, extending its post-earnings losing streak. Although the company's near-term financial performance has been quite disappointing (and this is putting it mildly), a longer-term risk looms.

A note on operating expenses

However, at the same time, companies also need to make sure that their businesses can deliver solid, and growing, profits to stockholders.

A good way to do things is to scale up operating expenses with revenues; if revenues are surging and management has reasonable confidence that growth will continue, then investing more is probably the right thing to do. If revenues are on the decline, then it may make more sense for companies to focus on a few, high-priority projects with the best chance of out-sized returns on investment.

With that background in place, let's take a look at InvenSense's "problem."

Operating expense scaled up with revenue, but revenues now on the decline 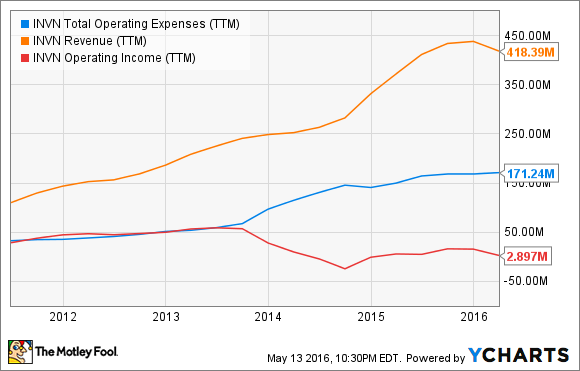 Notice that early on, InvenSense was able to scale operating expenses nicely with revenue and was ultimately able to generate reasonable amounts of operating income. However, in late 2013/early 2014, InvenSense's operating expenses turned sharply upwards -- likely bolstered by the confidence that management had in the impending Apple (AAPL -2.78%)-related revenue ramp that it would enjoy during the second half of 2014 and throughout 2015.

InvenSense's operating income did contract significantly, though, as the Apple-related revenue was at materially lower gross profit margins than its other revenue (not unexpected for volume purchases).

At any rate, InvenSense is now at a much higher operating expense run rate than it was just a couple of years ago. This would be fine if revenue continued to grow, but the company is seeing the exact opposite: revenue contraction.

Last quarter, InvenSense reported a year-over-year revenue decline of nearly 20% and, based on its guidance, it could see somewhere close to a 40% year-over-year decline in the current quarter. The decline seems to be based on significant cutbacks from Apple, severe share loss at Samsung (NASDAQOTH: SSNLF), and a generally weak high-end smartphone market (to which InvenSense is quite exposed).

As far as operating expenses go, InvenSense is guiding to a $2 million decline from the prior quarter, which CFO Mark Dentinger says is "in part because [the fourth quarter] contains an extra week and [the first quarter] does not."

In other words, InvenSense isn't guiding to materially lower operating expenses even as its business contracts significantly.

Revenues need to grow again ... or operating expenses need to come down

InvenSense doesn't face any near-term liquidity issues; it has around $284 million in cash, cash equivalents, and short term investments against $151 million in long term debt for a net cash position of about $133 million.

InvenSense can withstand a good deal of cash burn before things get too ugly. However, I don't think that investors are going to be all that happy if InvenSense doesn't act fairly quickly to adjust its operating expenses to what the business environment over the next couple of years could very well look like.