Please ensure Javascript is enabled for purposes of website accessibility
Log In Help Join The Motley Fool
Free Article Join Over 1 Million Premium Members And Get More In-Depth Stock Guidance and Research
By Reuben Gregg Brewer - May 18, 2016 at 1:14PM

After years of pain, steel-making coal's future is starting to look up again

Teck Resources Ltd (TECK 0.75%) is a diversified miner with a heavy focus on metallurgical coal. That's been a huge drag on performance for a number of years, but it's starting to look like the industry has finally hit bottom. So how big a deal is coal for Teck, and what happens if met coal starts to pick up again?

Teck is often associated with coal because it's one of the largest North American producers of steelmaking coal. But metallurgical coal isn't the only thing the company mines. For example, in the first quarter, coal revenues were about 40% of the top line. Copper and zinc, two other key products, contributed around 30% each.

It's not quite right to think that Teck is all about coal. But coal is very important -- only it hasn't been such a great contributor to the bottom line lately. In the first quarter, coal only contributed 4.5% to Teck's gross profit. The rest came from copper and zinc. 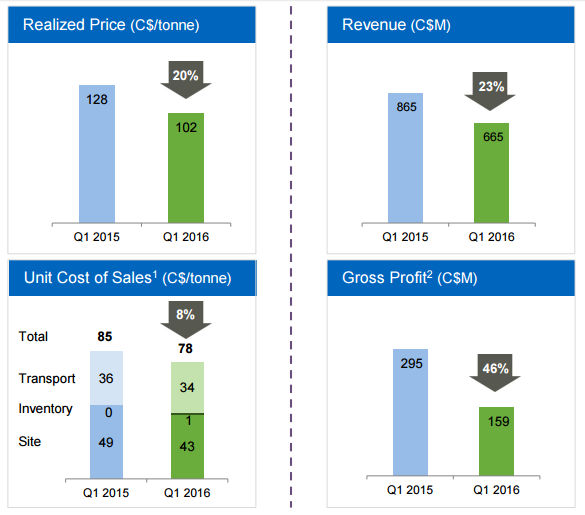 All the arrows point down... Image Source: Teck Resources.

The problem, of course, is that met coal has been in a deep downturn. Realized prices were down 20% year over year in the first quarter, and that's just a drop in the bucket longer term. That's left Teck to focus on what it can control: costs.

It trimmed its unit cost of sales by 8% year over year. But there's only so much it can do to offset falling prices, leaving coal revenues down 23%, and gross profits in the coal business off by 46%.

But that hints at the leverage inherent to the business. Indeed, according to the company, a $1 jump in the price of met coal would increase its profits by $23 million. So higher prices would be a real godsend for Teck. Here's the thing... it's starting to look like a bottom has finally been found in the moribund sector, and higher selling prices might actually be in the cards.

CEO Don Lindsay noted during the company's first-quarter conference call that "coal sales were higher than we originally expected and demand strengthened towards the end of the quarter." Even better: "The quarterly contract price of $84 per ton represents the first increase since Q3 of 2013." And perhaps most exciting: "the outlook for [the] steelmaking coal market has improved in the last two months, quite significantly." 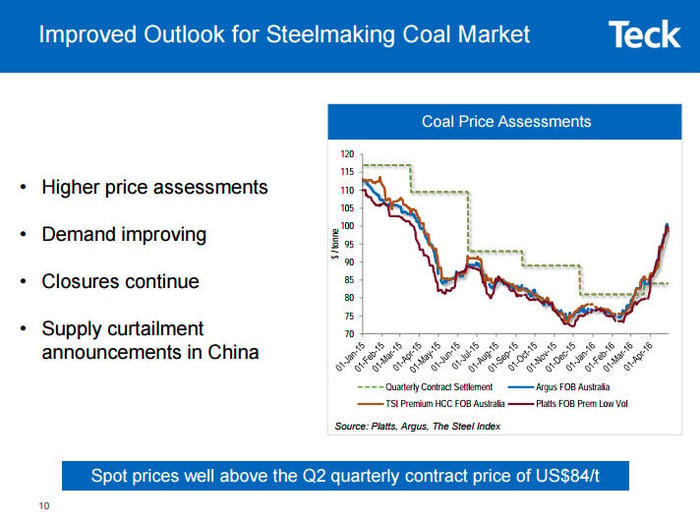 Is it time to get excited?

This is pretty exciting news for Teck, but you need to take it with a grain of salt. The company also pointed out in its first-quarter earnings release that "while a better balance between demand and supply seems to be forming, pricing remains low and we expect supply curtailments to continue to be implemented." In other words, the market may not be done with its correction just yet. It could just be that things are bouncing along the bottom.

At this point, Teck looks like it's survived the worst of the downturn and is ready for the upturn. That was something investors had become worried about because of a hefty spending bill for a new oil sands project the company has in the works. But the company has plenty of liquidity available to fund the completion of that project and sustain its other businesses. If the coal market is starting to strengthen, met coal could suddenly turn into a real bright spot for Teck.

The takeaway here isn't that coal is ready to go on a rally and lift Teck's shares along the way. If you've been avoiding Teck because of its coal business, you might want to rethink your opinion of the miner. It looks like met coal may have found a bottom, which would mean Teck's coal business would stop being a drag, and start contributing again to the allure of this out-of-favor miner's future.