Please ensure Javascript is enabled for purposes of website accessibility
Log In Help Join The Motley Fool
Free Article Join Over 1 Million Premium Members And Get More In-Depth Stock Guidance and Research
By Cory Renauer - May 20, 2016 at 3:41PM

Should a new cystic fibrosis treatment from AbbVie and Galapagos have Vertex Pharmaceuticals Incorporated investors nervous?

Belgian biotech company Galapagos NV (GLPG 1.59%) may be one of the most important drugmakers you haven't heard of yet. It doesn't have any products to sell, but U.S. biotech heavyweights AbbVie (ABBV 0.42%) and Gilead Sciences are trying to change that.

Vertex Pharmaceuticals Incorporated (VRTX 1.96%) investors should be paying attention to Galapagos as well. Its partnership with AbbVie could result in a cystic fibrosis treatment that might eventually threaten Vertex's burgeoning franchise.

Vertex reached blockbuster status once with Incivek for hepatitis C, only to lose share to Gilead's next-generation antivirals. Let's take a closer look at what Galapagos and AbbVie are working on, to see if Vertex is in danger of another heartbreaking loss.

Galapagos has a fancy drug-discovery platform that has produced some stellar preclinical candidates for the treatment of several indications, including cystic fibrosis. Cystic fibrosis is caused by a mutation in the CFTR gene -- and there are almost 2,000 known mutations. The CFTR gene is supposed to produce a protein channel that allows for the flow of ions across the cell membrane of cells in the lungs, gastrointestinal tract, and other organs. When a mutation occurs on the CFTR gene, it prevents the protein from functioning correctly.

So far Galapagos has discovered a handful of compounds that look like they can get those dysfunctional proteins to work, especially when used in combination: 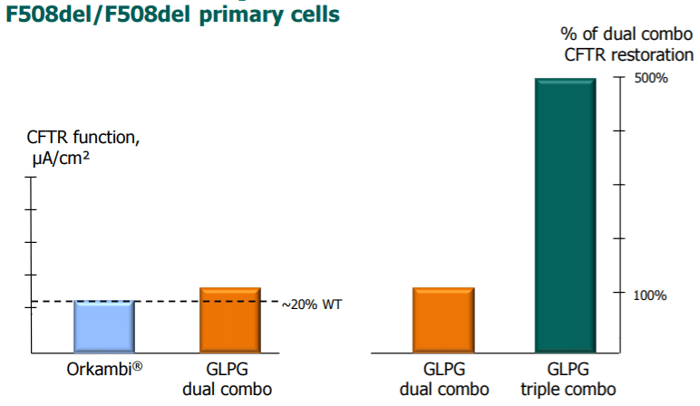 What you're looking at on the left is Vertex's groundbreaking dual combination drug, Orkambi. Approved by the FDA last summer, it's aimed at the largest genetic subset of cystic fibrosis patients, those with two copies of the F508del mutation in the gene that produces the CFTR protein.

What you're looking at on the right is a three-drug combination from Galapagos that appears more than five times as effective at restoring CFTR function as Vertex's Orkambi.

Back in 2013, AbbVie was so impressed with Galapagos' discovery technology that it fronted the company $45 million to produce some cystic fibrosis candidates. It looks like AbbVie got its money's worth.

Although Galapagos might not have the necessary resources to speed its candidates through the development process alone, its partner spent $4.4 billion last year on R&D. Here's why that might make Vertex investors a bit nervous.

All eggs in the cystic fibrosis treatment basket

In the first quarter, Vertex recorded $223.1 million in sales from Orkambi, and expects sales of the drug to reach at least $1 billion by the end of the year. Kalydeco is a single drug therapy for a smaller subset of cystic fibrosis patients that's expected to reach at least $685 million in sales this year. Despite the success of these two cystic fibrosis drugs -- its only commercial-stage products -- Vertex is pushing so hard on the R&D pedal that it posted a loss of $41.6 million in the first quarter.

Vertex's drugs are the only ones approved which treat the underlying cause of the disease. While they command a six-figure annual price tag, the company is reinvesting as much as possible into developing treatments for as many cystic fibrosis patients as possible. Such noble efforts aren't cheap, and if its treatments suddenly lost share of the space to a competitor from AbbVie and Galapagos, the company could be in trouble. 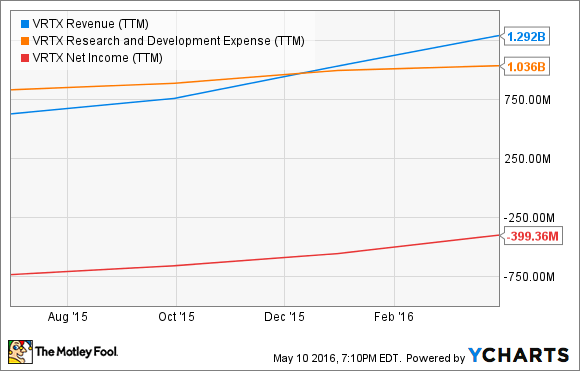 Before running for the exits, here are a few things Vertex investors should understand.

The results above are preclinical; in other words, they're laboratory observations. It's a long way from the lab to the pharmacy, and over 99% of preclinical candidates never get there.

Another calming fact for Vertex shareholders is the nature of AbbVie's agreement with Galapagos. While the partners are committed to producing a triple therapy, Galapagos is responsible for development through phase 2. If a candidate looks promising after that point, AbbVie will step in to write the big checks.

I think it could be a while before AbbVie needs to get out its checkbook. Galapagos didn't begin dosing people with one of its candidates until this January. The early stage trial recruited healthy volunteers to basically check for side effects, and to learn how it behaves in actual humans.

In February it dosed its first cystic fibrosis patient with GLPG1837, which is a CFTR potentiator in the same class as Kalydeco. Its role is to increase the potential of the channel being open; the study was supposed to enroll up to six patients.

Earlier this month Galapagos began another healthy-volunteer study with a second potentiator.  Maybe the first potentiator didn't work so well, or maybe Galapagos is just using an early clinical-stage shotgun approach. The important thing to bear in mind is that it's a long way from developing a triple combination.

First Galapagos will need to prove one of its drugs is safe and effective in a large population over a long amount of time. From that point it can begin trials with a second, then a third. Regulators are extremely hesitant about allowing more than one unknown entity at a time during trials, and when it comes to approvals it's practically unheard of. Odds are that it will be years at best before we can make concrete conclusions about the laboratory triple threat displayed above.

In the meantime Vertex is accumulating real-world data with thousands of patients, and has some triple combinations up its sleeve that, if all goes well, could be well entrenched before any of Galapagos' and AbbVie's combinations make their first sales.