Please ensure Javascript is enabled for purposes of website accessibility
Log In Help Join The Motley Fool
Free Article Join Over 1 Million Premium Members And Get More In-Depth Stock Guidance and Research
By Cory Renauer and Sean Williams - May 25, 2016 at 10:22AM

Here's the case for, and against, buying Myriad Genetics stock.

Myriad Genetics, Inc. (MYGN -1.46%), a specialty molecular-diagnostic laboratory that develops novel tests to help physicians and patients make better decisions, put up some big gains late last year only to give them up: 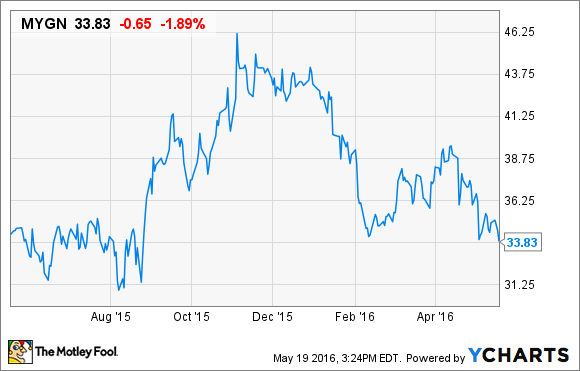 Recently, the the stock plunged, and is near a 52-week low. Is it a good time to get in now, or could there be more losses ahead?

To help answer that question, we asked two of our Motley Fool contributors to put their best case for and against investing in Myriad Genetics' stock right now. Have a look at what they say before making your own decision about the molecular-diagnostics pioneer.

Sean Williams: There are plenty of reasons to be cautious about Myriad Genetics' prospects, considering its high short interest and reliance on Medicare reimbursements; but you can consider me a full-fledged bull based on its innovation and valuation.

One reason I find Myriad attractive is that it sits at the center of the personalized-medicine revolution. Instead of one-size-fits-all treatments, doctors today are looking for ways to use the individual genetic make-up of patients to help treat potentially deadly diseases like cancer. Identifying certain genes or biomarkers can help physicians identify the best course of treatment, and Myriad's molecular-diagnostic tools are front and center in this trend.

Myriad's lead product is its BRACAnalysis test, which is used to decipher if women are carriers of the mutant BRCA1 or BRCA2 genes. These mutations increase the risk factor for women to develop breast cancer and/or ovarian cancer.

If you recall, actress Angelina Jolie underwent a proactive mastectomy after testing positive for a mutation, and not long thereafter, also had her ovaries and fallopian tubes removed after the possible early detection of precancerous cells. Given that Jolie's mother died young of breast cancer, and more than a half-dozen of Jolie's family members have dealt with cancer, her proactive decision, and the BRACAnalysis test, could be key to allowing her to live a long life.

Longer term, the molecular-diagnostic products Prolaris and Vectra DA are also exciting. Vectra DA is an advanced blood test given to rheumatoid arthritis patients that, in combination with physical examinations from a physician, can help track a patient's treatment progress to identify the risks of future joint damage. Considering there are about 1.5 million people in the U.S. alone with rheumatoid arthritis, this is an indication with substantive growth opportunity. In Q3, sales grew 17% year over year, to $12.3 million.

Prolaris is, perhaps, Myriad's most-exciting newer development. It's a molecular test designed to gauge the aggressiveness of prostate-cancer tumors using biopsy tissue. Because prostate-cancer growth can vary among men, a Prolaris score is a unique way of assisting patients and physicians in choosing the most-effective treatment. Prolaris revenue in Q3 totaled $5.2 million, up from just $0.5 million in Q3 2015.

Myriad is also attractive from a valuation basis. The company is trading at a reasonable PEG of 1.5, has $217 million in cash and no debt, and is sporting a healthy profit margin of 14.3% during the trailing 12-month period. In my opinion, you'll struggle to find a stronger company tied to the personalized-medicine revolution.

Cory Renauer: Myriad Genetics has been at the forefront of personalized medicine, but I don't think it's a buy at its current valuation. Recent prices have fallen, but are still 23 times trailing earnings, which means the stock is pricier now than before the Supreme Court yanked the rug out from under its hereditary cancer test exclusivity in mid-2013. 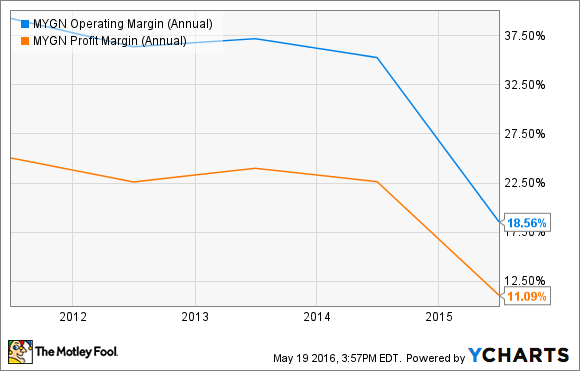 Ever since the ruling, pricing pressure has squeezed the company's margins. A recent revelation from a Medicare administrative contractor that hereditary breast cancer panel pricing was less than one-third what Myriad charges hints that its margins are about to be squeezed even further.

Granted, Myriad has done a fine job of using its available cash flows during the past few years to expand and diversify its revenue stream, but it isn't happening fast enough to support such a lofty valuation. Hereditary cancer screening still accounted for 82% of total revenue when it last reported.

The company has been scrambling to expand the number of genes included to provide a value proposition for healthcare providers. Its myRisk hereditary cancer test is now a 25-gene panel, which is impressive. Despite the innovation, sales from the segment are far below its exclusivity period peak, and have been mostly flat during the past couple of years.

Further ahead, I'm worried that the reimbursement schedules of end payers won't keep pace with Myriad's rate of innovation. In the meantime, tiny Invitae, which allows physicians to order tests for individual genes as if they're shopping at Amazon, is taking off. 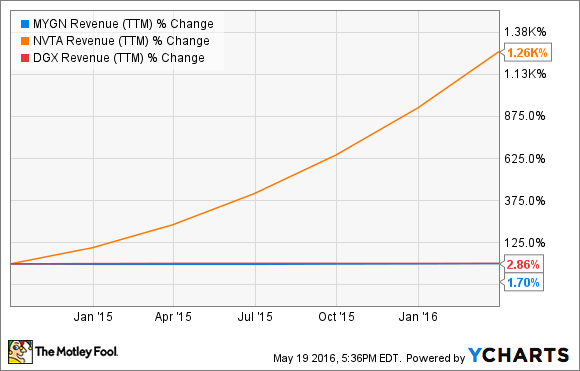 On the larger side of the industry, Quest Diagnostics isn't associated with impressive innovation, but even the lumbering giant has grown its top-line a bit faster than Myriad in recent quarters. With $7.5 billion in annual revenue, its scale should allow it to provide hereditary cancer screens at rates that much smaller competitors, such as Myriad and eventually Invitae, can't compete with while maintaining profitability.

Myriad's ability to innovate is impressive, but sooner or later, I think the rest of the market is going to realize it's running on the same hamster wheel as the rest of the diagnostic industry. Without exclusivity, the only durable competitive advantage in this space is economies of scale.

I would like to believe that Myriad's ability to innovate warrants its valuation -- but I don't. That's why I'm a sad bear on this stock at recent prices.