Please ensure Javascript is enabled for purposes of website accessibility
Log In Help Join The Motley Fool
Free Article Join Over 1 Million Premium Members And Get More In-Depth Stock Guidance and Research
By Reuben Gregg Brewer - May 31, 2016 at 2:39PM

A heavy weight still holds Freeport back, which means Hecla could be a better bet. Here's why.

When it comes to investing, you always have options. In fact, you should make a habit of pitting one company against another to see which is the better choice, a tactic employed by Benjamin Graham in his iconic The Intelligent Investor. An interesting head-to-head today is Freeport-McMoRan Inc. (FCX -3.40%) and Hecla Mining (HL -4.85%). They are both diversified, but for one, diversification has turned into a headache.

Freeport-McMoRan's primary business is mining for copper and, to a lesser degree, gold and molybdenum. And while the commodity downturn wasn't any kinder to the company's top line than it was to Hecla Mining's, Freeport made a bold but ill-timed move into oil in 2013, and that only served to continue the hard times for the company.

On the mining side of the business, Freeport has been working hard to cut costs and get its operations in fighting shape, which has included selling assets. But it's done a solid job, noting recently that its mining operation is cash flow positive. And with relatively low costs, Freeport is in solid position to benefit from a continued commodity upturn. So, in some ways, Freeport is in a pretty good spot. 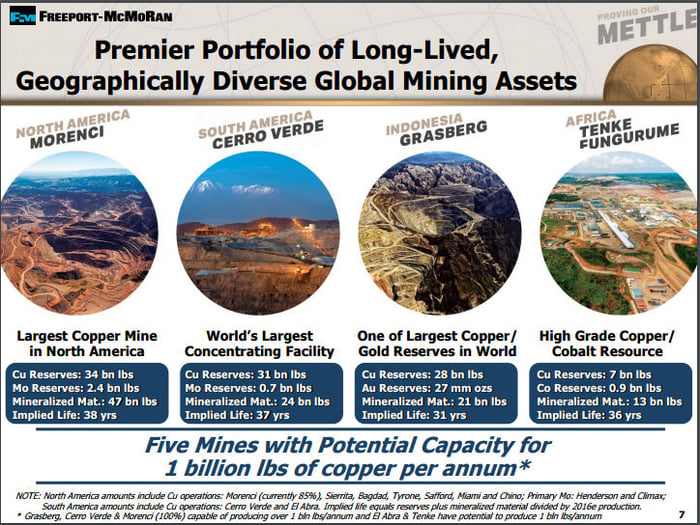 Some of Freeport's key mines and where they are located. Image source: Freeport McMoRan.

If it weren't for that oil investment. The oil business eats up a huge amount of cash flow even after cost-cutting efforts and, since the oil price plunge beginning in mid-2014, has been a massive drag on the top and bottom lines. The company lost $3.35 a share in the first quarter, and roughly $3.20 of that loss was driven by asset writedowns in the oil business. Worse, the oil acquisition left the company with a huge debt load. Long-term debt was about 85% of the capital structure at the end of the first quarter. That's a lot for any business, let alone one reliant on often-volatile commodity prices.

So Freeport-McMoRan isn't just a play on recovering commodity markets -- it's really a turnaround story where oil is playing the central role. It's most appropriate for more aggressive investors who are willing to watch the oil business closely. 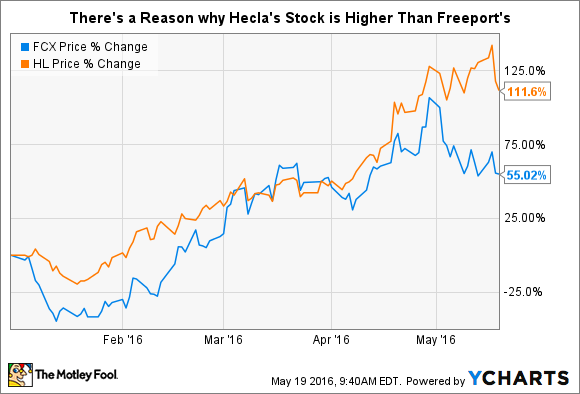 Which brings us to Hecla Mining. Unlike Freeport, Hecla is pretty much your typical miner. About 40% of revenue is tied to gold, 30% to silver, 20% to zinc, and a touch over 10% to lead. Precious metals are the clear driving force, accounting for around 70% of the top line, but zinc and lead add some valuable diversification. Moreover, Hecla operates largely out of North America, so it avoids countries with weak regulatory controls and suspect political systems. (Freeport has operations around the world, including in regions with difficult governments.)

Another positive is that Hecla has reasonably low costs. Its cash cost for gold was around $775 an ounce in 2015, with silver's cash cost at $5.85 an ounce, taking into account the offsetting revenue from by-products. Both of those prices are well below where gold and silver trade today. And Hecla continues to invest in the future, with a number of projects set to come on line this year and next.

That said, investing in a downturn comes with risks. Hecla lost money in 2015, the second time it's bled red ink in the last five years -- and spending on new mines didn't help. So there are risks to keep in mind, particularly if gold and silver prices start to retreat from recent gains. However, long-term debt at this miner is around 30% of the capital structure, much more reasonable than Freeport's debt levels, and Hecla traces its history back over 125 years. So it's seen a downturn or two in its time, and its solid balance sheet suggests it will make it through this one, too.

While it would be a massive overstatement to suggest that Hecla is the perfect mining investment, it looks much better positioned than Freeport-McMoRan does today. So if you were wondering which is the better buy, I'd have to give the clear edge to Hecla Mining. That said, if Freeport can clean up its balance sheet and ditch the oil business, you'll want to reassess this match-up. That, however, would require some huge moves for Freeport to achieve. If you aren't in the mood for that kind of excitement, Hecla is the better option.