Please ensure Javascript is enabled for purposes of website accessibility
Log In Help Join The Motley Fool
Free Article Join Over 1 Million Premium Members And Get More In-Depth Stock Guidance and Research
By Rick Munarriz - Jun 5, 2016 at 9:06AM

Yum! Brands has an interesting promotion going on during the NBA Finals where the masses win if the home team fans walk away disappointed. 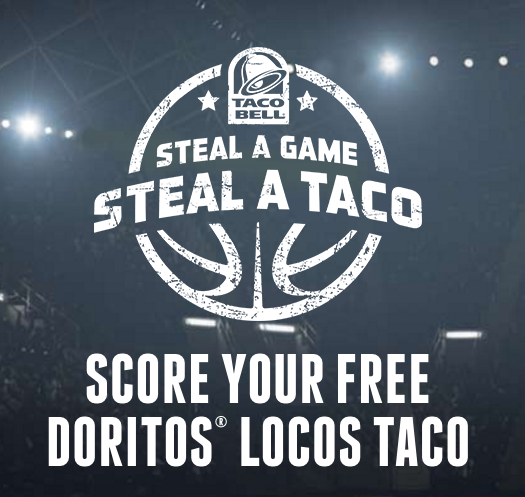 Burrito rollers don't typically play favorites during the NBA Finals, but it's fair to say that Yum! Brands' (YUM 0.47%) Taco Bell will be rooting for the underdog when the Cleveland Cavaliers tip off against the defending champion Golden State Warriors tonight in Oakland. Taco lovers may be doing the same thing.

The Warriors won the first game on Thursday night, and after winning 39 of its 41 home games during the regular season, it's hard to bet against them in tonight's contest. The series will then move to Cleveland where LeBron James and the Cavs were an impressive 33-8 at home. It's still more than likely that an away team will manage to squeeze out a victory during the series -- and Taco Bell is counting on that.

Normally, basketball-related giveaways find the prize giver rooting against the potential winner. When Taco Bell's sister concept Pizza Hut offered $1 million last year if one of three contestants could sink a half-court shot taken backwards, it -- or more than likely its insurer -- didn't want that to actually happen. Airlines may or may not want to give away the flights or frequent flyer miles as prizes if contestants sink a series of shots. However, Yum! Brands really does want Taco Bell to have to "shell" out a ton of Doritos-dusted tacos this month.

Yum! Brands has everything to gain. Most people aren't going to just order the free taco and bolt. They're going to order more food or at the very least a beverage to wash it down with. Taco Bell also is scheduling the redemption windows during mid-week and mid-meal hours. Most Taco Bells aren't pretty busy from 2 p.m. through 6 p.m., so it's not as if freebie-seeking masses will turn away potential paying customers.

The chain could use a pop. Comps were positive in its latest quarter, but up a mere 1% since the prior-year period. The two-year comps are a more favorable 7%, but it seems that the Quesalupa hasn't had the same kind of novelty spark that the Doritos Locos Tacos or Waffle Taco have had in previous years.

Getting folks back to Taco Bell is the top priority, and if a home team has to disappoint its fans to make it happen, Yum! Brands will take it.