Please ensure Javascript is enabled for purposes of website accessibility
Log In Help Join The Motley Fool
Free Article Join Over 1 Million Premium Members And Get More In-Depth Stock Guidance and Research
By Rick Munarriz - Aug 19, 2016 at 9:04AM

The consumer electronics superstore chain is holding a huge golden anniversary sale, but it may want to look out for an exit strategy.

The big markdowns are happening to celebrate Best Buy turning 50 years old. The original store opened on Aug. 22, 1966. A golden anniversary is as good a reason as any to host a massive sale this summer, and some will argue that it's not the only thing that's on sale. Pull up a Best Buy stock chart, and you'll find a stock that's trading slightly higher so far in 2016 but it's still trading 25% below its all-time peak set three years ago.

Best Buy is holding up far better than the thinning ranks of publicly traded rivals, but it's hard to get excited about the superstore concept's future. Best Buy has made it through half a century, but it's going to be a real challenge to make it through another decade.

The next step down 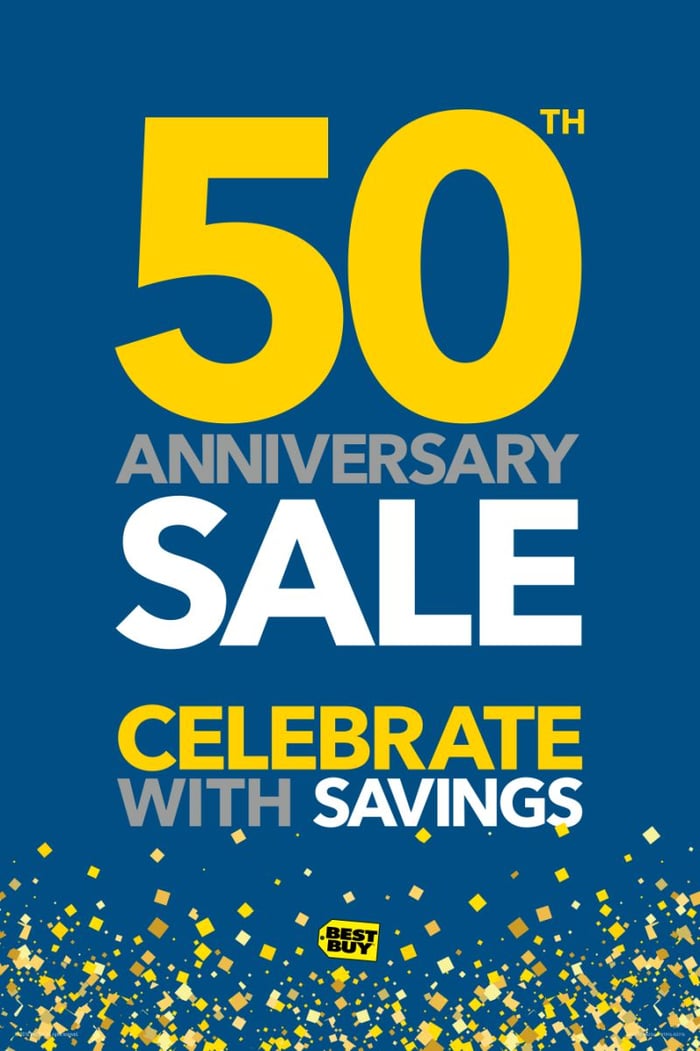 Best Buy reports its latest quarterly results next Tuesday. It's not likely to be pretty. Best Buy's guidance in May called for flat comps and $8.35 billion to $8.45 billion in revenue, a slight dip in both year-over-year and quarter-over-quarter revenue. Even after aggressively buying back stock over the past year, something that will pad earnings by roughly $0.04 a share, the meandering retailer expects to check in with a profit between $0.38 a share and $0.42 a share. It earned $0.49 a share a year earlier.

There will be a couple of one-time items holding profitability back. Best Buy's bottom line won't be as ugly as it looks at first glance. However, at the end of the day, Best Buy is just another physical retailer at the wrong end of the digital revolution.

Best Buy will be selling a lot of heavily discounted electronics today that will require less visits to physical stores in the future. Best Buy stock has held up better than its smaller and weaker rivals as a beneficiary of their demise, but sooner or later Best Buy won't be able to lean on taking market share from lesser competitors and online sales to merely post flat comps. It will be gnawing on itself, and that's why it's dangerous to make a long-term bet on the Best Buy.