The leading premium streaming video platform has a big month on the way. Let's go over some of the reasons the next few weeks will matter.

Netflix (NFLX 5.03%) is as hot as ever. Netflix stock hit yet another all-time high on Thursday, soaring nearly 20% higher through just the first three months of 2017. Those gains will be tested in April.

There are some pretty important events taking place in the coming weeks that investors in the leading premium streaming platform will want to watch closely. Let's go over some of the reasons why this coming month will be a big one for the dot-com darling. 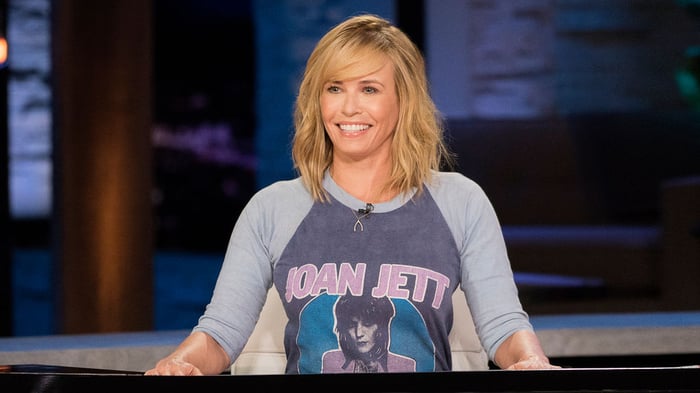 Chelsea returns for a second season with a tweaked format on April 14. Image source: Netflix.

Netflix's guidance back in January was that it would end March with 99 million streaming subscribers worldwide, 5.2 million more than it had at the end of December. This would suggest that Netflix lap the 100-million-member mark at some point in April, even though the second quarter has historically been its weakest period in terms of net additions.

Outside of a rare miss in the second quarter of last year, Netflix has typically exceeded its subscriber targets. Pushing out conservative guidance opened the door for Netflix to surpass the meaty mark of 100 million streaming accounts in March, but that doesn't appear to be the case. CEO Reed Hastings used to break news of major milestones on social media. He's held back lately, but one would think that if Netflix crossed into nine figures that Hastings would be shouting it from the rooftop.

April will be the month where bulls and bears alike will be waiting to see when Netflix puts out a press release announcing that it has topped 100 million subscribers. Monday will be the first trading day of the month. We'll see how long it takes.

There were a lot of people left scratching their heads when Netflix recently announced that it will be extending its 2014 deal with Adam Sandler's Happy Madison Productions, doubling the number of Sandler-led original movies that will premiere on Netflix to eight. The first two have been panned critically, and the first one -- The Ridiculous 6 -- was marred with race-stirring controversy during the production. Several Native Americans walked away from the set of the Western romp, accusing the script of being disparaging to Native Americans.

The Do-Over managed only slightly less critical venom, and that brings us to the third film in this now eight-film deal with Sandler: Sandy Wexler, debuting on Netflix in two weeks. It's important to remember that Netflix knows more about our video consumption trends than critics. Netflix has the data, and The Ridiculous 6 shattered initial viewing records for full-length features on the platform. It still wouldn't hurt if Netflix was able to score a hit. Maybe the third time will be the charm.

April 14 is also important because the second season of Chelsea will kick off on the same day. Netflix's first attempt at the late-night show format with Chelsea Handler wax a mixed bag. The show cultivated a niche audience with three weekly half-hour shows, but it failed to generate the same kind of viral video magic that we've seen so often through traditional late-night shows. Chelsea is getting a tweak this time around. It will be an hour-long show every Friday instead of half-hour installments on Wednesday, Thursday, and Friday. We'll see if that does the trick.

The make-or-break moment for Netflix will come on April 17, when it puts out its first-quarter results after the market close. The stock's rally over the past three months comes with heightened expectations.

Will Netflix have hit its forecast of 99 million streaming subscribers by the end of March? Did it go on to top 100 million by the time the earnings release goes out? Can Netflix live up to analyst targets of 35% top-line growth and massive improvement on the bottom line? We're now less than three weeks away from finding out so, yes, April is going to be a big month for Netflix stockholders.