Please ensure Javascript is enabled for purposes of website accessibility
Free Article Join Over 1 Million Premium Members And Get More In-Depth Stock Guidance and Research
By Beth McKenna - Nov 11, 2019 at 11:55AM

Here's everything you need to know about the entertainment giant's broad subscription video streaming offering, which rolls out on Tuesday, Nov. 12.

Walt Disney ( DIS -1.90% ) will be going all in on subscription video streaming this Tuesday, Nov. 12, when it launches its direct-to-consumers Disney+ service in the United States, Canada, and the Netherlands.

CEO Bob Iger discussed this topic in some detail last Thursday on the earnings call that followed the entertainment and consumer discretionary behemoth's release of its fiscal fourth-quarter results, which beat Wall Street's estimates and delighted investors.

Here are some key things that you should know about Disney+. 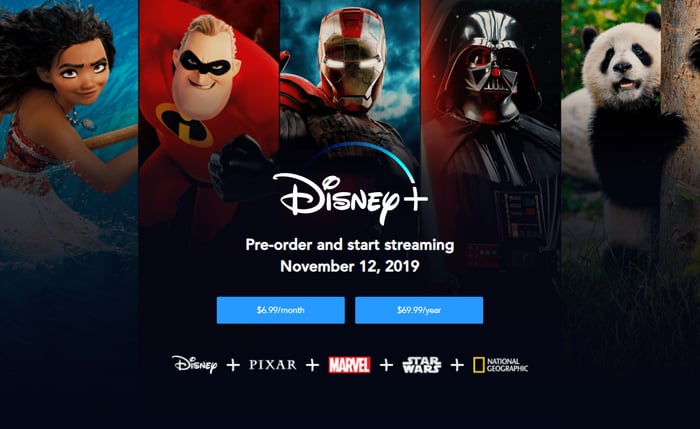 Disney+ launch dates around the globe

Disney+ launches in the U.S., Canada, and the Netherlands next Tuesday [Nov. 12], with Australia and New Zealand coming online November 19. And today, I'm pleased to announce on March 31st, Disney+ will launch in markets across Western Europe, including the UK, France, Germany, Italy, Spain, and a number of other countries in the region.

Disney included the Netherlands in its initial launch because it beta tested the service in that country. Beginning on Sept. 12, the Dutch were offered a free two-month trial of the partial Disney+ package so the company could get a feel for demand, gather customer feedback, and work out any technical issues before the launch.

Individual rollout dates depended upon when Disney was able to gain access to its back library for the service in various countries. In many geographic markets, the company had -- and in some cases still has -- exclusive licensing deals in place with Netflix ( NFLX -3.76% ) or other distributors for certain content.

Consumers can directly subscribe to the service for $6.99 a month or $69.99 a year at disneyplus.com, and starting November 12, they can access the service through a growing variety of partners and platforms including Apple, [Alphabet's] Google, Microsoft, Sony, and Roku, and today we're pleased to announce additional distribution partnerships with Amazon Fire, Samsung, and LG. Disney+ will also be available in a bundle with ESPN+ and ad-supported Hulu for $12.99 a month.

ESPN+ is the company's sports-focused streaming service, which launched in April 2018. Disney now controls Hulu, thanks to its massive Twenty-First Century Fox acquisition, which closed in March.

This pricing compares favorably to that of subscription video streaming market leader and first mover Netflix, with its basic, standard, and premium services priced at $8.99, $12.99, and $15.99, respectively.

As the image above indicates, Disney+ will include content from the company's four legacy studios -- Disney, animation specialist Pixar, superhero-focused Marvel, and Star Wars creator Lucasfilm -- and National Geographic, a franchise that came to the company via its Fox acquisition.

At launch, Disney+ users will have immediate access to more than 500 movies ... and more than 7,500 episodes of library television content, including 30 seasons of [The] Simpsons. By year five, this growing collection will include more than 620 movies and more than 10,000 television episodes along with countless shorts and features. At launch, we'll offer 10 original movies, specials, and series exclusive to the platform, including The Mandalorian [the first live-action Star Wars series]. ... Within a year of launch, the amount of original content on Disney+ will increase to more than 45 series, specials, and movies and will expand to more than 60 original projects per year by year five.

From Iger's remarks about what the company learned from the beta test:

We learned that some of the features including the 4K [or ultra-high definition (HD)], the HDR [high dynamic range] movies were very, very popular. The fact that you can have four concurrent live streams, also very popular, the personalization was also quite popular and, most importantly, the ability to download without restriction was very, very popular. [Emphasis mine.]

Disney+ will allow unlimited downloads of any TV show or movie on up to 10 devices, whereas not all Netflix content can be downloaded.

Disney needs its direct-to-consumer streaming business to be successful. The revenue and eventual profits from this arena won't simply be gravy on top of the money the company's established businesses generate and can be expected to continue to keep pulling in. Entering the streaming market was a necessary move for Disney to help it make up for slowly dwindling profits in its cable TV operation stemming from an increasing number of consumers ditching cable in favor of streaming options.

In fact, Disney+ will almost surely cannibalize the company's media networks business -- comprised of cable and broadcasting -- to some degree. Hesitancy to cannibalize its lucrative media business is likely why Disney is a late entrant into the streaming market. Some might consider this a misstep, but it's one that a company with Disney's amazing content could probably afford to make.

The size of the prize? The global video streaming market was valued at $22.6 billion last year, according to PricewaterhouseCoopers, which projects that it will grow to $30.6 billion by 2022.

Disney is a winner

Competition continues to heat up in the streaming space, with Apple TV+ having just launched and several new streaming services scheduled to roll out in 2020. But Disney+ should prove immensely successful, as the company has a treasure trove of content that consumers simply love and that I'd venture to characterize as second to none.

Winners often keep winning -- and Disney is a winner.