Please ensure Javascript is enabled for purposes of website accessibility
Log In Help Join The Motley Fool
Free Article Join Over 1 Million Premium Members And Get More In-Depth Stock Guidance and Research
By Asit Sharma - Dec 26, 2012 at 11:05AM

A Chilean Coca-Cola bottler quenches its thirst in neighboring countries.

In a recent article, I highlighted the attractiveness of Chile as a stable, well-managed economy with bright prospects for those keen to invest in South America. One of the companies that will likely flourish in this environment is Embotelladora Andina (AKO.A -2.27%) (AKO.B -2.27%), a Coca-Cola (KO 1.88%) bottler headquartered in the capital city of Santiago . Known more popularly as Coca-Cola Andina, the company is the second-largest coke bottler in South America, and the seventh-largest in the world.
Coca-Cola Andina operates in Chile, Argentina, and Brazil. A merger completed in October 2012 with another Chilean bottler, Embotelladoras Polar (Coca-Cola Polar), adds operations in Paraguay. In addition to manufacturing and distributing Coca-Cola's products, the company also sells mineral water, juices, and beer (in Brazil only). Annual sales are over $2 billion, and the company's market capitalization is roughly $2.4 billion. Coca-Cola Andina trades on the NYSE via "Class A" and "Class B" shares. Class A shares have preferred voting rights. Class B shares do not have preferred voting rights but receive a 10% greater dividend than A shares,
and thus on a total return basis, outperform their A siblings.
Access to Brazilian consumers
While Coca-Cola Andina has operated in Chile since 1946, its largest source of revenue is now found in Brazil, where the company sells Coca-Cola under license from Coke in the states of Rio de Janeiro and Espirito Santo. Coca-Cola Andina derives 42% of its revenue from Brazilian sales. It's a healthy market: Total beverage volume through the first three quarters of this year grew 9.1% over the prior year. Recorded revenue actually declined by about 1%, however, due to the strength of the Chilean peso against the Brazilian real. The Chilean peso has outperformed other South American currencies in 2012, propelled by the expanding Chilean economy and the rising price of copper, the country's major export.
The company sells beer through its Brazilian subsidiary: Andina Brazil. It distributes a mix of both international and local labels, including Amstel, Dos Equis, Heineken, Sol, Xingu, and Bavaria. At 1.4 million unit cases year-to-date, beer represents only about 3% of total Brazil sales by case volume. However, this market represents a long-term opportunity for Coca-Cola Andina: Case volume grew by 56% over the same period last year.
Soft drink and beer exposure to Brazil is one of the most compelling reasons to buy shares in Coca-Cola Andina. Investors gain exposure to the Brazilian soft drink market, which is projected to grow to $37 billion by 2015, while enjoying the diversification of revenues supplied by Chile, Argentina, and Paraguay. In addition, beer sales could evolve into a sleeper revenue hit as Coca-Cola Andina develops its long-term strategy to compete with local Brazilian brewers.
Favorable comparison to other bottlers and beverage companies
It's been a good year to be a Coke bottler, and a good year to be a beverage company in general. Both in Latin America and around the globe, consumer purchasing of beverages has rebounded. Let's compare Coca-Cola Andina's stock performance year to date against a group of direct competitors and peers: 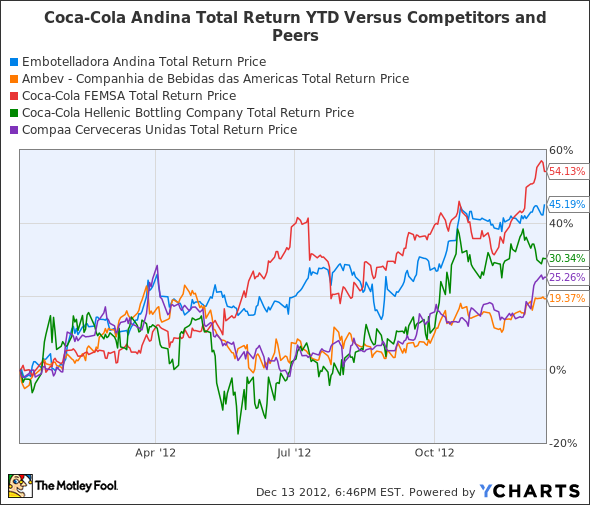 Each of these companies has outperformed the S&P 500 index this year (up 14.91% on a total return basis). Coca-Cola Andina has seen stellar appreciation in 2012, second to only Coca-Cola FEMSA. To put the stock's 2012 run in context, the company fares nicely within this group on a financial return and valuation basis:
Coca-Cola Andina's ROE is second only to AmBev's. Also, despite a dizzying stock chart in the current year, the company is not excessively valued relative to its peers: At 21.24 times forward earnings, it sits in the middle of the range of this group. Recall that Coca-Cola Andina's earnings were somewhat depressed in its Brazil segment due to the strong Chilean Peso. This was also true in Argentina. Both countries over time will likely see their currencies come closer to parity with the Chilean peso. Brazil in particular, the sixth-largest economy in the world by total GDP, will potentially experience hearty long-term currency appreciation. Coca-Cola Andina will then benefit by a reversal of the current negative currency effects on its earnings.
Tight with mom and pop
While its reach now extends to four South American countries, Coca-Cola Andina does business on a very local level. Prime targets of its distribution network include small, independently run groceries and convenience stores. For decades, Coca-Cola Andina's army of salespeople and distribution personnel have visited these locations week after week, delivering Coke products, fruit juices, and bottled water. The relationship with tiny retailers adds stability and longevity to Coca-Cola Andina's business. In the company's third-quarter 2012 corporate presentation, it cites the following percentages of total soft drink sales under the channel mix category of "Mom and Pop":
Argentina: 50%
Brazil: 22%
Chile: 53%
The extended network of small purchasers provides insulation from the risks of entering into outsize distribution contracts with grocery chains and joint venture partners. In comparison, competitor Compania Cervecerias discloses that only 33% of its Chilean soft drink sales occur with mom-and-pop establishments, which it more urbanely refers to as "Off-Premise Retail."
Thirsting for more
Coca-Cola recently announced plans to invest $1.3 billion in Chile over the next five years. $200 million of this spend has been allocated to a new Coca-Cola Andina plant in Renca, Chile (Coca-Cola owns 11% of Coca-Cola Andina). Coke's investment is but another indication that Coca-Cola Andina is gearing up for more growth, both domestically and across the continent. The company pays a dividend that currently yields 2.10%. If you're searching for a stable, energetic enterprise that is poised to participate in the South American growth story, consider allocating some of your portfolio to this emerging Coke bottler.