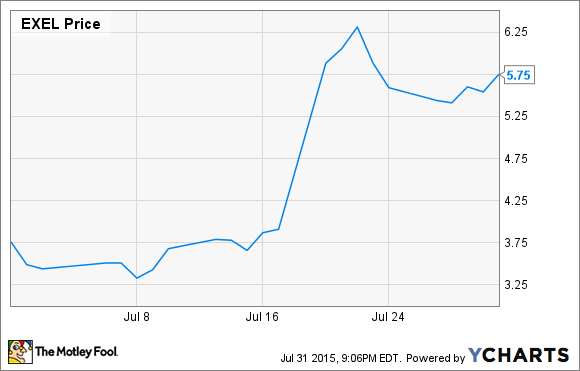 Shares of Exelixis (NASDAQ:EXEL), a biotech company focused on developing therapies to combat cancer, galloped higher by 52% in the month of July based on data from S&P Capital IQ after announcing positive top-line data from its METEOR trial and raising much-needed capital for its ongoing operations.

Exelixis' METEOR study involved testing the efficacy of Cometriq -- its drug currently FDA-approved only to treat a rare form of aggressive thyroid cancer -- against Afinitor in patients with advanced renal cell carcinoma. Following the failure of Cometriq in the phase 3 COMET-1 study for patients with metastatic castration-resistant prostate cancer, a lot was riding on the late-stage METEOR study -- and Cometriq didn't disappoint this time around.

According to the top-line data released on July 20, the Cometriq arm reduced the risk of disease progression or death by 42%, meeting its primary endpoint of a statistically significant improvement in progression-free survival while also exhibiting an overall survival trend that favored the Cometriq arm with a hazard ratio of 0.67 compared to the Afinitor group. Full overall survival data, which is a secondary endpoint, will likely be available in first half of 2016. Regulatory filings to expand Cometriq's label should be filed in the U.S. and EU by early 2016.

Shortly after Exelixis' positive results and the ensuing explosion in its stock price, the company priced 25 million shares of common stock at $5.40, leading to gross proceeds before commissions of $135 million. This cash will help alleviate near-term cash concerns for Exelixis, and should give it (in my best guess) enough of a cash runway to get through 2016.

What's notable is that Exelixis could have even more room to head higher following its dismal 2014 performance.

On or before Nov. 11, 2015 the FDA is expected to hand out its decision on the advanced metastatic melanoma combo therapy of Exelixis' cobimetinib and Roche's Zelboraf, which targets the BRAF V600 mutation.

At the American Society of Clinical Oncology's annual meeting, Exelixis announced updated data that showed median progression-free survival for the combo of 12.3 months, compared to just 7.2 months for the Zelboraf monotherapy arm. Additionally, the response rate for the combo therapy was 70% compared to only 50% for the monotherapy arm. Complete responses were also a tad higher (16% vs. 11%) among combo therapy patients. Long story short, an approval here seems more likely than not.

Exelixis shareholders can also look forward to studies combining cobimetinib with cancer immunotherapies. Roche is currently conducting a phase 1 study involving an in-house anti-PD-L1 therapy in combination with cobimetinib for solid tumors. This early stage study should yield results before the end of the year.

I may be biased as a shareholder of Exelixis, but I foresee the potential for additional upside. With numerous catalysts upcoming and profitability now a genuine possibility within a few years, Exelixis still has the potential to turn some heads.