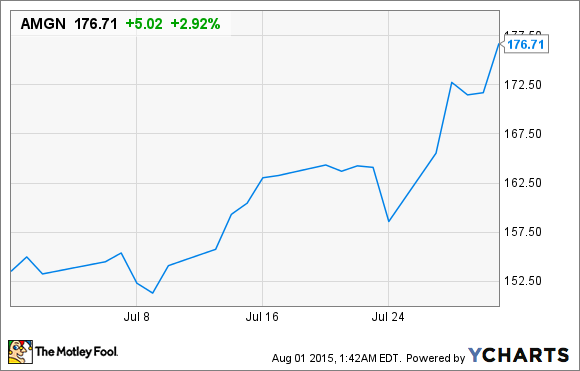 The most recent catalyst came a week ago when the company reported its market-topping second-quarter earnings results. For the quarter, Amgen delivered $5.37 billion in sales, a 4% increase from the prior-year quarter, with adjusted profit per share growing by 8% to $2.57. Wall Street had been expecting a smaller EPS of just $2.42. Furthermore, Amgen boosted its top- and bottom-line forecast for the full year on the heels of strong drug demand and tight cost controls. It now expects $21.1 billion to $21.4 billion in revenue and EPS of $9.55-$9.80, up from a previous forecast of $20.9 billion-$21.3 billion in sales and $9.35-$9.65 in EPS.

The other two major catalysts involved drug approvals: one in the U.S., and the other in the EU.

Within the U.S., Amgen saw its label for multiple myeloma drug Kyprolis expand into a second-line indication. Based on Amgen's estimates, it essentially triples its prospective annual patients with this approval. Kyprolis has been pegged by the Street as a drug that could generate as much as $3 billion in peak annual sales, and this supplemental new drug application approval is a big component to reaching this lofty goal.

In the EU, the European Commission granted marketing authorization for Repatha, Amgen's next-generation high cholesterol drug that inhibits PCSK9. With its EU approval Amgen's Repatha became the first PCSK9 inhibitor approved anywhere. This could mark just the first step in Amgen's ability to expand its cholesterol-lowering drug to larger patient populations. It, too, has blockbuster potential.

The question investors need to ask themselves here is whether or not Amgen has the catalysts to head even higher.

On one hand, the argument can be made that Amgen's late-stage pipeline success has already been well reflected in its share price. Despite crushing the Street's EPS estimates (something Amgen has done quite regularly as of late), Amgen's sales growth of 4% isn't exactly game-changing, and its modest top-line growth could contain its stock price.

On the other hand, Amgen is pulling out all the stops when it comes to lowering costs via job cuts, and the company is improving its operational efficiencies to push its margins higher. These cost cuts should allow it to more easily absorb the higher costs associated with drug launches and late-stage trials, while also moving the EPS needle higher. There are, of course, also more than a half-dozen new molecular entities that could still be approved by the FDA before 2017 is over.

With these facts in mind, my opinion remains that Amgen could still have further upside, but its gains will likely be more modest than the tripling in share price that we've witnessed over the past four years. In order for Amgen to really pile on the gains we'll need to not only see its core pipeline products get the thumbs-up from the FDA and EU, but we'll need to see successful drug launches as well. For now investors will need to take this one quarter at a time.