Strong phase 3 trial results have prompted the healthcare giant to expand the use of Darzalex once again.

Johnson & Johnson (JNJ 0.33%) subsidiary Janssen announced on Monday that it had filed a supplemental Biologics License Application (sBLA) to the U.S. Food and Drug Administration (FDA) for its multiple myeloma drug Darzalex (also known as daratumumab).

Strong results from the company's phase 3 Candor study showed that J&J's Darzalex in combination with two other drugs from Amgen, Kyprolis and dexamethasone, helped reduce the chance of cancer progression or death than Amgen's two drugs without Darzalex. Johnson & Johnson's new application will seek to expand the drug's approval to be used alongside Kyprolis and dexamethasone specifically for multiple myeloma patients who have failed to respond to traditional therapy (also known as refractory or relapsed multiple myeloma). 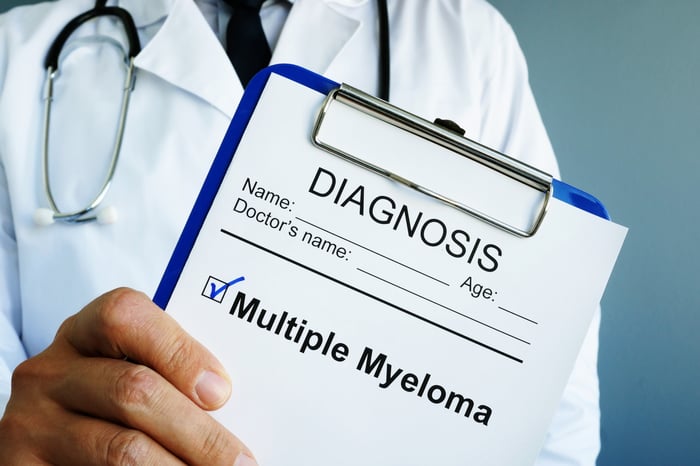 Janssen Research & Development Vice President Dr. Craig Tendler went on to say that most patients with multiple myeloma end up seeing the condition return, hence the importance of there being multiple different treatment options available. Darzalex was first approved by the FDA back in November 2015, and since then has received a variety of additional approvals from the healthcare agency, usually regarding dosing regimens or its use as part of a new drug combination.

Multiple myeloma is a type of blood and bone marrow cancer in which the body produces abnormal blood cells, specifically white blood cells known as plasma cells. These abnormal cells begin to accumulate in the bone marrow, crowding out the healthy functioning blood cells.

Estimates project that the global market for multiple myeloma treatments could reach as high as $50.5 billion annually by 2025, which represents a compounded annual growth rate of 13.3% over the next five years.