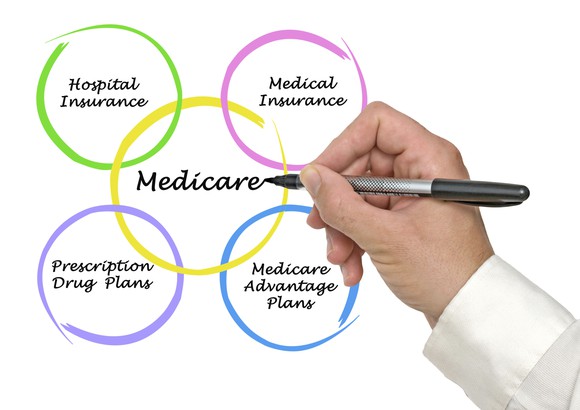 Medicare is a vital program for Americans seeking to get coverage for their healthcare, especially after they retire. Although most people understand Medicare's importance, they don't always know the details of just how critical a need there is for the services that the Centers for Medicare and Medicaid Services provide. Below, we'll look at some stats on the Medicare and Medicaid programs that will open your eyes to the importance of the program.

Medicare and Medicaid cover a substantial fraction of the American population

All told, Medicare and Medicaid cover more people than you might think. Medicare's population served is projected to have been 57 million in the federal government's 2016 fiscal year, up from 55.2 million in 2015. Of those, more than four-fifths get coverage because of their age, with the rest claiming benefits based on disability.

Surprisingly, Medicaid covers even more people, with an estimated 71.1 million recipients in fiscal 2016. Here, though, fewer than 6 million get Medicaid benefits because of age. More than 30 million children receive Medicaid benefits, and adults make up nearly 25 million more to go along with more than 10 million blind or disabled Americans.

Medicare physician coverage is worth about $3,000 per year to recipients

Medicare paid out $99.1 billion in program payments related to Medicare Part B physician and durable medical equipment in calendar 2014, the most recent year for which information is available. Nearly all Medicare participants who needed healthcare services that year had expenses in this category, amounting to 32.7 million out of 33.9 million served under Medicare Parts A and B combined. When you do the math, the amounts that the program spent for its participants amounts to about $3,030 per person. That goes to show just how costly healthcare coverage can be and how much need there is for services as you grow older and become eligible for Medicare.

As you'd expect, however, the amounts that Medicare pays out for hospital care are even more substantial. A much smaller number of people need hospital care, with just 6.4 million participants getting services under Medicare Part A for in-patient hospital charges. Yet the $128.8 billion in program payments that Medicare paid dwarfs what the program spent on physician and durable medical equipment, and the corresponding average that Medicare paid was more than $20,000 per person. That makes it all the more surprising that even though Medicare Part B coverage comes with monthly premiums, Medicare Part A hospital coverage comes at no monthly premium cost, requiring only modest copayments and deductibles in most cases.

Medicare Part D prescription drug coverage is the newest part of the overall Medicare program, having come into existence just over a decade ago. The program responded to a key source of financial hardship for older Americans, and the cost of Medicare Part D shows just how important it has become for participants in the program.

According to Medicare, 37.2 million people used their Part D benefits in calendar year 2014. That's more people than took advantage of either Part A hospital or Part B medical services. Benefit payments from Medicare to cover prescription drug costs amounted to $78.1 billion in 2014. When you work through the math, that works out to almost $2,100 per person in drug costs annually, and that only includes the portions that Medicare paid. When you consider the deductibles and copayments that most Medicare Part D plans require their participants to pay, it's easy to understand just how much money Americans spend on the prescription drugs they need to stay healthy.

Millions of Americans need Medicare and Medicaid, and it's staggering just how much the two programs do for the public. In this context, though, it's also easy to understand why the program is under long-term financial threat and why so many people see healthcare as the top challenge that the U.S. faces in the decades to come.