The dividend raises continue to fall down like fresh snow. Happily for income investors, many companies have chosen the pre-holiday period to bump their payouts -- as if timing them for the festive days.

This scramble to squeeze in payout hikes isn't letting up yet, leaving me with plenty of stocks to choose from for our usual three featured raisers.

Venerable card payments giant Mastercard (NYSE:MA) is capping 2016 with a 16% lift in its quarterly payout to $0.19 per share. Additionally, the company announced that its board has authorized a new, $4 billion stock buyback program.

Mastercard is an extremely profitable company, and it pleased investors in its most recently reported quarter. In Q3, the company's sales saw a nice rise of 14% (to almost $2.9 billion), with net income growing even more robustly, at 21% to just under $1.2 billion. Both figures handily beat the average analyst expectations.

The future looks good for the credit/debit card industry. The world continues to move away from cash in favor of plastic, while next-generation digital payment solutions are becoming more firmly entrenched. Both trends play to Mastercard's strengths.

Meanwhile, the company is a cash-generating machine. Both operating and free cash flow have risen notably, with the latter providing far more than enough for both the raised dividend, and whatever Mastercard feels like spending on its share buybacks. This dividend is very safe. 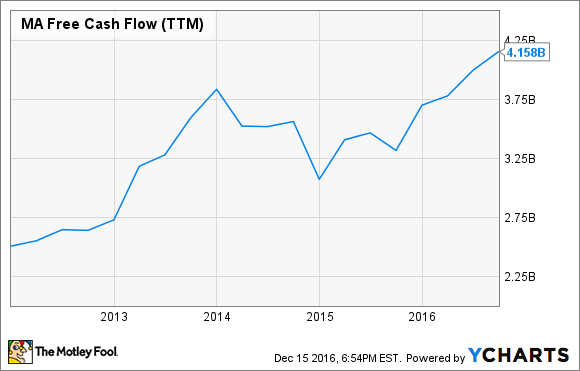 Mastercard's upcoming payout is to be dispensed on Feb. 9 to stockholders of record as of Jan. 9. It would yield 0.8% at the current stock price, well under the 2% yield of dividend-paying stocks on the S&P 500.

The company's just-authorized share repurchase program will kick in once its existing initiative expires. The current program has roughly $1.3 billion remaining under authorization.

UK-based engineering conglomerate Pentair (NYSE:PNR) is a Dividend Aristocrat, having hiked its payout a minimum of once annually for at least 25 years running. The company is maintaining that status with a slight 1.5% bump in its quarterly dividend to just under $0.35 per share. 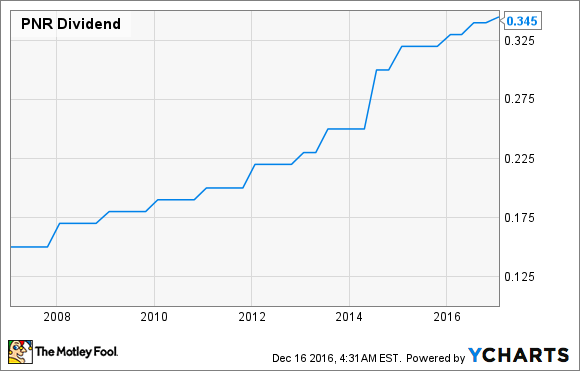 Pentair is lighter, and in better fighting shape, than it had been previously. This past August it reached a deal to sell its largest unit, valves and controls, to Emerson Electric for a cool $3.15 billion in cash.

That move is part of a broader attempt at "repositioning" the company's business. It's too early to tell if they'll help or hinder, regardless the latest financials indicate that Pentair's doing fine. In its Q3, the company's sales rose by 9% to $1.2 billion. Net profit improved by 22% to $141 million, beating the average analyst estimate.

Pentair's free cash flow figure tends to fluctuate, but recently it's been high enough to fund the constant dividend payouts, plus share buybacks. The company's distribution raise is minimal, and it's doing better on a fundamental basis, so I think for the foreseeable future it's not going to have much of a problem staying aristocratic.

Pentair's new dividend will be paid on Feb. 10 to investors of record as of Jan. 27. It yields a theoretical 2.4% on the most recent closing stock price.

Sprawling medical devices company Stryker (NYSE:SYK) recently declared a robust 12% hike in its quarterly dividend, to just over $0.42 per share.

It won't struggle to fund the extra amount. In its most recently reported quarter, the company was able to deliver 17% year-over-year growth in revenue (to over $2.8 billion), and net profit that was 11% higher at $526 million. Both results edged above analyst expectations. 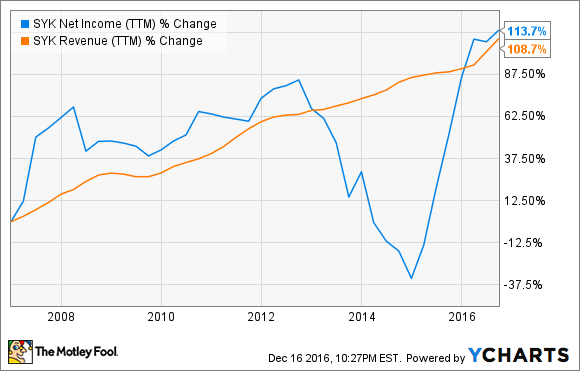 A good chunk of this growth was due to acquisitions -- Stryker has kept itself busy lately snapping up smaller companies, like heart emergency devices specialist Physio-Control International.

Yet its asset buys don't tell the whole story; they were responsible for 10.5% of the 17% revenue growth during the quarter, according to the company. The remainder came from its existing product lines. It's encouraging that Stryker is managing to power growth through both new and existing sources.

The wider medical sector is well primed for growth, given the graying of the American population, and the consequent need for products and services of all kinds. Stryker is good at satisfying this demand, so we can expect the company's results to improve further, providing for fresh dividend raises in the future.

Stryker's enhanced payout is to be handed out on Jan. 31 to stockholders of record as of Dec. 30. At the current share price, it would yield 1.4%.