To most American workers, a 401(k) plan is a cornerstone of their long-term financial plan. In fact, a new Charles Schwab survey found that 90% of people would think twice about taking a job if it didn't offer a 401(k) plan. However, more than half of respondents to the same survey aren't confident in their ability to make their own 401(k) investment decisions, and 47% say the materials explaining their 401(k) are tougher to understand than their other benefits. Despite the popular perceptions, making the best 401(k) investments for you doesn't need to be confusing or difficult, as long as you follow these three basic steps.

Step 1: Determine your risk tolerance and target asset allocation
When talking about a 401(k), the term "risk tolerance" generally refers to how much of your money should be in stocks, and how much should be in fixed-income assets such as bonds. The basic idea is that while stocks have the highest potential for long-term returns, they also tend to be the most volatile over shorter periods. If you're, say, 20 years from retirement, you have enough time to ride out any market turbulence that occurs, but if you're retiring in two years, that's not the case. 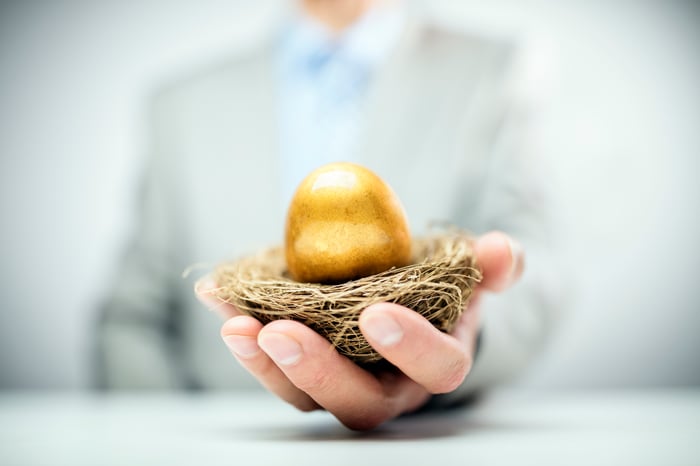 The single most important factor in determining you risk tolerance is your age. One common rule of thumb often cited by experts is to subtract your age from 110 to figure out how much of your portfolio should be in stocks. So a 50-year-old should have roughly 60% of his or her 401(k) in stocks.

This isn't a one-size-fits-all rule, and there are a few other things to consider. For one thing, if you're planning to retire early or late, you should adjust your risk tolerance accordingly. The "110" rule assumes that you plan to retire around age 65, so if you plan on waiting until 70, you could potentially add 5% to your stock allocation. Conversely, if you're planning on early retirement, it makes sense to reduce your risk earlier than you otherwise would.

Another thing to consider is how dependent you'll be on your 401(k) assets. If you have a large stock portfolio and several income-producing properties, your 401(k) is just one piece of your nest egg, so you can afford to take more risk. However, if your retirement plan only consists of your 401(k) and Social Security, it would be silly to take unnecessary risks with your account.

Finally, consider your own personality. Some people are natural risk takers and can deal with large swings in their 401(k) balance in the pursuit of long-term gains, and others panic when their account drops by $100. The point is that there are several considerations here, so I recommend that you use the "110" rule as a starting point and adjust accordingly based on your other circumstances.

Step 2: Choose your funds accordingly
Once you have an asset allocation in mind, take a look at the various funds offered by your particular plan. Pay specific attention to a few pieces of information – each fund's risk profile (usually described as "aggressive, conservative, etc."), and its expense ratio, which is how much you'd pay each year to invest in that fund.

The main ideas here are diversification and keeping expenses low. Even if you determine that 80% of your portfolio should be in stocks, it's probably a bad idea to put all 80% into a single fund labeled as "aggressive growth." Spread your money to several different funds.

And, pay attention to the fees each fund charges, which is listed as the "expense ratio." The difference between a 0.20% and 0.50% expense ratio for similar funds may not seem like much, but can literally cost you of hundreds or even thousands of dollars in investment gains over the years.

To illustrate this point, here's a sampling of some the most common funds offered in actual 401(k) plans.

As an example, if I decide I should allocate 70% and 30% of my portfolio to stocks and bonds, respectively, I could choose the following allocation.

The majority of my 401(k) assets would be invested in lower-cost funds, and I would have exposure to different types of stocks and bonds, as well as some exposure to foreign markets and some protection against inflation. Bear in mind that there is no right answer here, and as long as I meet my allocation target, there could be 100 equally valid combinations of funds that could work for you.

Another possibility is target-date funds, which are offered by most 401(k) plans. These are listed in terms of retirement date, they automatically adjust your stock/bond exposure as you get closer to retirement, and they're the most hands-off type of 401(k) investment.

My only issue with these funds is that their fees tend to be on the high end of the spectrum. For example, the Fidelity Freedom 2040 fund has an expense ratio of 0.75%, which Morningstar lists as below average. Some charge 1% of your invested assets or more per year. Meanwhile, my hypothetical fund choices have a weighted average expense ratio of just 0.22%. Don't get me wrong – target-date funds aren't necessarily a bad choice, but know that you're going to pay more to have someone else do the work for you.

Step 3: Invest as much as you can, as soon as you can
Finally, the absolute best way to master your 401(k) is to boost your contributions. Most people contribute enough to take advantage of their employer's matching contributions, but nothing more. While this is a good starting point, it may not be enough to provide a comfortable retirement.

The IRS allows employees to choose to have up to $18,000 withheld from their paychecks in 2015 ($24,000 for those over 50) and deposited into their 401(k) on a tax-deferred basis. While most people can't contribute quite that much, you may be surprised at the impact a small increase could have.

Consider an example of a 35-year-old who earns $75,000 per year, and whose employer is willing to match 401(k) contributions up to 5% of total pay. Assuming 7% annual investment returns, take a look at how much a small increase could add up to over the course of a 30-year career.

The point here is that your 401(k) doesn't need to be scary or complicated. Simply determine how much risk you can take on, and then choose a diverse mix of low-cost funds. Then, boost your contributions to a higher (but affordable) level, and watch your money grow into a large retirement nest egg before your eyes.