Hurricane Sandy is a huge storm that has the potential to do substantial damage to the East Coast. As much as everyone hopes that its toll in loss of life will be minimal, its economic impact is likely to be massive, and already, cities along the Eastern Seaboard from New York City to smaller communities are taking drastic measures to safeguard life and property.

Investors often look for silver linings from catastrophic events like hurricanes, seeking companies that can profit from helping people recover from the storm. Yet as rational as it may sound to buy stocks that will benefit from Hurricane Sandy and to sell stocks that will see big losses, it's important to remember one key fact: As a one-time event, Sandy should have a one-time impact on a stock's value and therefore should not change your overall views on future growth over the long haul. As a result, changing your investing strategy simply because of a single isolated event -- no matter how major it may become -- is a huge mistake. 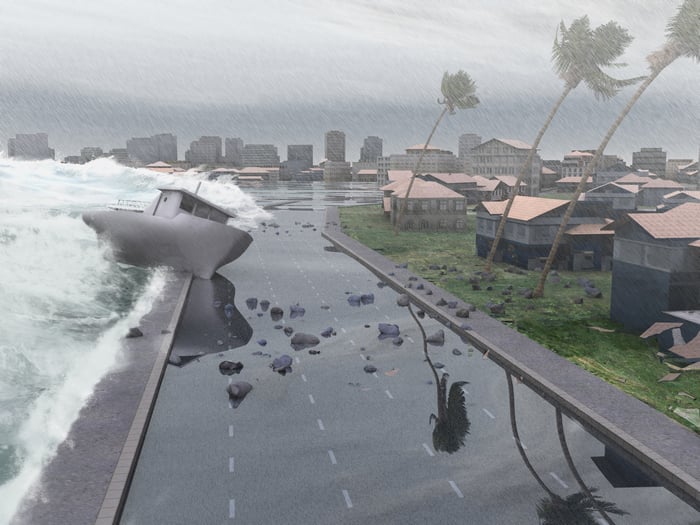 Winners and losers
All you need to figure out stock picks for events like Hurricane Sandy is common sense. In fact, that's what makes picks based on one-time events so appealing -- it seems obvious that certain businesses will benefit while others will get hurt.

For instance, with hurricanes and other weather-related events, two names that immediately come to mind are Lowe's (NYSE:LOW) and Home Depot (NYSE:HD). These companies tend to see positive effects on both ends of a storm: first before bad weather hits, as business owners and homeowners buy protective materials like plywood sheets to board up their property, and then after the storm has passed, to obtain the supplies they need to make vital repairs.

Take this line of reasoning a bit further, and you can find some not-so-obvious names that would gain for the same general reasons. For instance, Generac Holdings (NYSE:GNRC) jumped more than 10% in four days last week, as the maker of portable generators clearly stands to benefit from increased buying activity as those fearful of losing power take steps to make alternative arrangements.

On the other side of the coin are insurance companies, which may have to pay billions in claims if early estimates of the storm's damage prove correct. Already, Hartford Financial (NYSE:HIG) and Travelers (NYSE:TRV) have seen significant price moves in advance of the storm, with Travelers currently the No. 3 insurer in New York for personal and commercial lines and the No. 2 company in Connecticut.

On Wall Street, memories are short
As attractive as these calls may be, don't make the mistake of assuming that they'll have any long-term impact on the companies involved. For instance, given the nationwide scope of Lowe's and Home Depot, these companies can readily expect a certain level of hurricane activity bolstering sales each and every year in some part of the country.

Moreover, you can get a hint of what the future may hold for these companies by examining how they reacted to past events. After Hurricane Katrina, Home Depot and Lowe's immediately popped higher but were eventually overwhelmed by a weakening overall economy. And after last year's Hurricane Irene, Generac spiked upward after the storm and kept moving higher into the winter months. But by early September, it had given up nearly all of its gains from the storm.

Conversely, selling insurance stocks may turn out to be exactly the wrong long-term move. After Irene, Hartford actually gained ground when estimates turned out not to be as bad as many had feared. Travelers took huge losses, but it was also able to increase its premium rates for insurance renewals. As a result, Travelers' profits have soared over the past year. Although insurers may well see big losses hit their bottom lines this quarter, their stocks could end up soaring in the long run by giving them the cover they need to keep premiums high, boosting revenue and profits.

Be safe out there
Whether you're in an area affected by Hurricane Sandy or are simply watching from the sidelines, think twice before you invest based on its impact. Before you know it, Wall Street will have forgotten about the storm, and you'll be left with positions that may not have much appeal after the bad weather dies down.

Tune in every Monday and Wednesday for Dan's columns on retirement, investing, and personal finance. You can follow him on Twitter @DanCaplinger.