Don't squander or fritter away any extra dollars you have. Here are four great ways to put $1,000 to good use.

Every now and then each of us comes into a little extra, or perhaps unexpected, money. It might be a bonus from work, a tax refund, a repaid loan, or the proceeds from the sale of some asset. If we're smart, we will put it to productive use. Here are four excellent ways to spend $1,000.

Selena Maranjian: One of the smartest things to do with $1,000 is to pay off any high-interest rate debt. Low-interest rate debt, such as most mortgages, typically isn't a problem, but the kind of debt many people carry on credit cards can have them facing interest rates of 25% or more. That's a massive problem.

Check out these stats from the folks at Creditcards.com: The average credit card debt for households that carry credit card debt was recently $9,600 -- almost $10,000. And each card that usually carries a balance sported an average balance due of roughly $7,500. These are just averages, too. Plenty of Americans are walking around with tens of thousands of dollars in debt owed to credit card companies. If you carry a balance of $10,000 and are being charged 25% interest on it, you're looking at forking over $2,500 every year -- just in interest. That sum wouldn't even make much of a dent in your balance. If you're carrying $50,000 in credit card debt, you may be facing annual interest obligations of more than $12,000!

It's terribly hard to get ahead financially when you're carrying any kind of debilitating debt. It's smart to pay it off with any extra dollars you have -- and, indeed, to find or earn even more extra dollars in order to be free of such debt as soon as possible. Don't despair, either, because you can dig yourself out from under gobs of debt. Our discussion boards are full of people who have done so.

Protect yourself with an emergency fund. Image: Pixabay.

Brian Feroldi: If you find that you have an extra $1,000 lying around and you have yet to fully fund an emergency fund, I'd suggest that should be the first place that the extra cash should go. Most financial experts suggest that you keep anywhere between three to six months' worth of expenses in an easy-to-access account so that you will be prepared when a costly "life event" happens. Having a big pile of easily accessible cash makes it much easier to deal with the loss of a job or the breakdown of the family car, which is likely to happen sooner or later.

I'm such a big fan of emergency funds that I suggest contributing to them before you take care of other important financial concerns such as putting money in a retirement plan, adding to a kid's college fund, or even saving for a down payment on a home. Why? It's much easier to predict when you will be sending a kid off to college or need money for a down payment than it is to figure out when a job loss will occur or when you (or a loved one) will fall ill. A fully stocked emergency fund goes a long way toward preventing the need to access high-interest rate debt when something bad happens and can provide you with much needed time to make rational decisions when tragedy strikes.

So how much do you need? Take a look at your average monthly spending on necessities such as housing, food, and transportation, and multiply by at least three -- perhaps using a much higher multiple if you have family members counting on your income to put food on the table. Park the cash in a simple checking or savings account at your bank of choice and you'll be amazed at how much less stress you will feel the next time something bad happens to you. 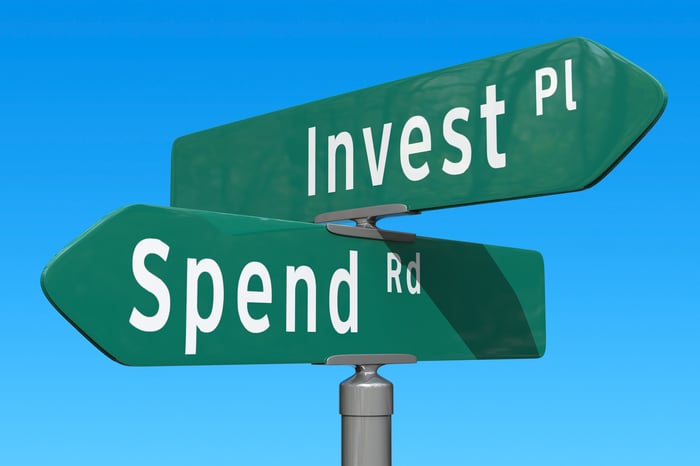 Brian Stoffel: I'll start by saying that I think my Foolish colleagues have hit the nail on the head. If you have high interest rate debt, your extra $1,000 should be spent paying it off as Selena suggested. If you're lucky enough not to have any such debt, then I think the emergency fund that Brian suggested is your next best bet.

But if you find yourself in the comfortable position of having no high-interest debt, and having an emergency fund that can cover at least a few month's living expenses (note: this is likely much more than just $1,000), then the wisest thing you can do with your money is invest it.

If you're reading this, you're likely a newer investor. So, instead of diving in head-first by purchasing shares of individual companies, I suggest picking a low-fee, broad exchange-traded fund (ETF) such as the Vanguard Total Market ETF or the SPDR S&P 500 ETF Trust. The former will have you invested in most of the U.S. stock market, while the latter focuses on 500 of the biggest companies (that together make up about 80% of the U.S. market).

To give you perspective on what a big difference this sum can make over time, consider a 25-year-old making a one-time $1,000 investment. If the returns over 40 years match the market's inflation-adjusted average of 6.8% per year, then come retirement time, this amount has grown to almost $14,000 in today's dollars!

Jason Hall: One of the best long-term things you could do with $1,000 is turn it into tax-free income when you retire. How can you do this? Follow Brian Stoffel's advice, and invest it. Just be sure you invest within a Roth IRA.

The Roth IRA is one of the average American's best wealth-building tools. Depending on your income -- there are income limits that prevent the highest-earners from using it -- you can set aside up to $5,500 each year, and grow that money tax-free until you retire. (Those aged 50 or older get to contribute up to $6,500.) And even when you take out distributions in retirement, the money is still tax free.

The best part? The long-term average returns of the stock market that Brian mentioned include all of the recessions, collapses, corrections, and other bad stuff that's happened in history to the market. In other words, you can truly set it and forget it. Just make your investment and let time and compounding returns do the heavy lifting. And when you retire, reap the rewards with a tax-free nest egg to help fund the kind of retirement you want to enjoy.