Please ensure Javascript is enabled for purposes of website accessibility
Log In Help Join The Motley Fool
Free Article Join Over 1 Million Premium Members And Get More In-Depth Stock Guidance and Research
By Sean Williams - Mar 19, 2016 at 6:57AM

Medicare may be less than 15 years away from major problems if these charts are correct.

A lot of attention has been paid to Social Security during this election season -- and rightly so. Social Security is the financial backbone that provides a foundation for our nation's seniors during their golden years, as well as income for the disabled and survivors of deceased workers. Unfortunately it's on an unsustainable path. By 2035, according to the latest Social Security Trustees' report, the Social Security Trust will have exhausted its cash reserves, leaving no choice but to cut benefits by 21%, or to raise payroll taxes dramatically, in order to keep the program solvent.

But what's often overlooked is that Medicare has even more immediate issues. Medicare, which primarily helps pay for some qualified later-in-life medical costs for seniors ages 65 and up, is also on an unsustainable course. Image source: 2015 annual report of the Board of Trustees of the Federal Hospital Insurance and Federal Supplementary Insurance Trust Funds,

This chart from the latest annual report of the Board of Trustees for the Federal Hospital Insurance and Federal Supplementary Medical Insurance Trust Funds shows that Medicare's Hospital Insurance Trust Fund is 14 years away from major issues. By 2030, the HI Trust is expected to completely exhaust its cash reserves, with a high-cost estimate model suggesting that the funds could be depleted by as early as 2022. To be fair, if medical care costs somehow slowed dramatically or reversed course, the HI Trust could see its cash reserves extend beyond 2030.

If a depletion of the cash reserves were to occur, the benefits paid out by Part A, the hospital insurance portion of the Trust, would only equal the amount of tax revenue being collected. In other words, hospitals could be in for a major revenue cut.

Why is the HI Trust under pressure? It likely boils down to three factors.

First, people are living longer than ever, meaning they could require more preventative care and surgical procedures. The longer people live, the more likely it is they'll rely on Medicare to help pay a good chunk of their qualified medical bills.

Secondly, we're at an inflection point where baby boomers are beginning to hit age 65, the point at which they become eligible for Medicare benefits, in increasing numbers. Just as we've witnessed with Social Security, there simply aren't enough new workers entering the workforce to cover the medical expenses that boomers will bring to the table. The Trustees' report suggests that once 2022 rolls around, the reserves of the HI Trust could begin to head downhill at a rapid rate.

Finally, medical cost inflation is putting a major dent in most portions of Medicare. Actuarial and consulting firm Milliman pointed out that prescription drug costs rose by an estimated 13.6% last year, their fastest rate of growth in eight years. Considering the strong pricing power of drugmakers and the opaque cost for medical procedures from one hospital to the next, medical expenses aren't expected to get cheaper anytime soon.

You're getting way more than you're paying for
Yet shifting demographics are only a part of the reason why Medicare is in trouble. Chart by author. Data source: The Urban Institute. Based on men and women turning 65 in 2010 and earning an average of $44,600. Urban Institute calculations use 2012 dollars.

The preceding chart, which is based on data from the Urban Institute in 2012, depicts how much single males and single females received in lifetime Medicare benefits compared to how much they paid in lifetime Medicare taxes. Both assumptions are based on men and women earning an average of $44,600 in 2012 dollars, and turning 65 in 2010.

But the real calamity is that it looks likely to get worse. Chart by author. Data source: The Urban Institute. Once again, data is based on 2012 dollars and the year a cohort turns 65 years old.

These ratios are growing for the same reasons listed above: demographic shifts and rising prescription drug and procedure costs.

Perhaps one of the biggest issues with Medicare are rising prescription drug costs. Medicare doesn't currently have the power to use the clout of the federal government to negotiate for more attractive drug prices. Democratic Party presidential hopeful Hillary Clinton in September proposed a prescription drug reform plan that, among other things, would include a component that would allow the government to negotiate on behalf of Medicare. Medicare Part D (prescription drug) spending totaled $78 billion in 2014, so the assumption is that billions could be saved annually by allowing the federal government to get involved with pricing negotiations.

Another potential fix includes a sort of means-testing for Medicare-eligible patients. Just as Republican Party front-runner Donald Trump has called on wealthier Americans to forgo a Social Security benefits payment come retirement, one idea that's been floated around is requiring well-to-do persons to pay a co-pay or deductible if they earn more than a certain amount of income annually. As a reminder, Medicare traditionally covers 80% of eligible costs with the beneficiary picking up the remainder of the expenses with no out-of-pocket annual limit. With Medicare means-testing in place, wealthier individuals could be called upon to pay more. 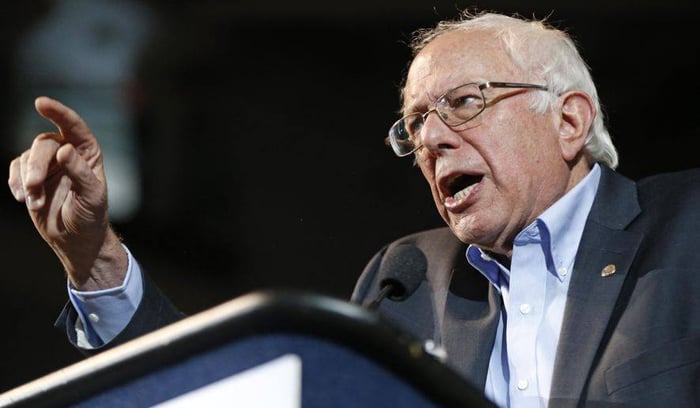 Arguably a less popular solution might be to boost taxes on everyone. Democratic Party candidate Bernie Sanders' Medicare-for-All health reform would seek to impose a 6.2% employer tax on businesses and a 2.2% healthcare premium benefit tax on individuals that he believes would generate enough revenue to provide universal healthcare. Of course, the big concern being floated around is whether or not the American public could really afford to pay more in taxes when other shortfall, such as Social Security and federal budget deficit, exist.

The idea has even been put out there that things need to change at the physician, hospital, and drugmaker level. Instead of paying based on the procedure, payment rendered should be based on positive outcomes. By turning it into a value proposition, it's possible the drivers for hospitals, physicians, and drugmakers could be changed for the better.

This isn't a debate that's going to be easily resolved, but it's important for Americans to realize that Medicare's woes are just as front-and-center as those of Social Security.

Do you have an idea on how to fix Medicare? Sound off in the comments below.