Please ensure Javascript is enabled for purposes of website accessibility
Log In Help Join The Motley Fool
Free Article Join Over 1 Million Premium Members And Get More In-Depth Stock Guidance and Research
By Matthew Frankel, CFP® - May 20, 2016 at 1:37PM

REITs like these two can give you the income you need in retirement, while still allowing your portfolio to grow.

Real estate investment trusts (REITs) can be an excellent choice for retired investors' stock portfolios. Not only do REITs tend to pay above-average dividends, but they can also have excellent potential for capital appreciation, which can create a growing income stream and help retirees keep up with, or even beat, inflation. However, not all REITs are suitable for retirees' portfolios.

With that in mind, here are a couple of the right kind of REITs that could work in your portfolio, even after you're retired. 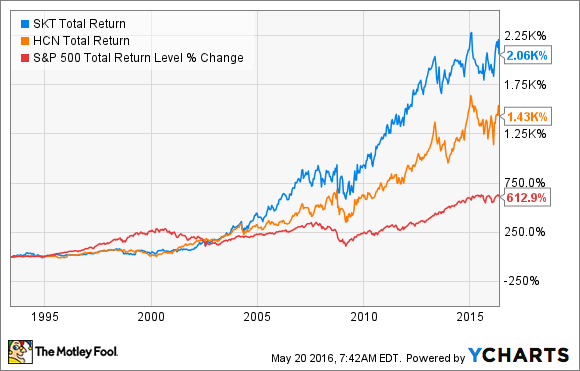 A growing and fragmented market

I've written about the merits of healthcare real estate as an investment many times before, but I feel it is such a good opportunity that it deserves to be mentioned again as a great choice for retirees.

Welltower (WELL -0.35%) is a massive healthcare REIT with nearly 1,500 properties in the U.S., U.K., and Canada. The company invests primarily in private-pay senior housing (64% of the portfolio), and also has substantial long-term and post-acute care properties, as well as outpatient medical facilities. And, the company's properties are newer and located in more desirable areas than the competition, leading to stronger occupancy and faster rent growth.

The main reason I love healthcare real estate is the growth opportunity in years ahead. Not only is this $1 trillion industry highly fragmented -- no REIT has more than a 3% market share -- but there is expected to be a growing demand for healthcare over the coming decades as the population ages rapidly. In fact, the senior citizen (65+) population is expected to nearly double by 2050, a trend that will certainly benefit Welltower's senior housing-oriented portfolio.

Welltower is already taking advantage of opportunities in the sector, investing an average of $1.1 billion per quarter over the past four years. The company has been particularly aggressive in the U.K. and Canada, where the aging population trends are just as strong as in the U.S. In fact, the elderly population in Canada is growing even faster than ours.

As far as income goes, Welltower pays a 5% dividend yield, and has raised its payout consistently (but not every single year) throughout its 45-year history. Even more impressively, the company has averaged a 15.6% total return during that time -- a remarkable level of performance to sustain for more than four decades. To put this into perspective, a $10,000 investment in Welltower's IPO would be worth more than $6.8 million today.

A different kind of retail

Many investors avoid retail, assuming all retail investments are risky. However, Tanger Factory Outlet Centers (SKT -1.83%) is a different kind of retail. Specifically, retailers who sell goods at deeply discounted prices are somewhat immune from online competition, and are doing extremely well. You may have heard how dollar stores are the fastest growing type of retail because the bargains found in those stores aren't available anywhere else. The same idea applies to outlets like those in Tanger's properties.

Not only that, but outlet retail is a pretty recession-resistant business. As president and CEO Steven Tanger said, "in good times people love a bargain, and in tough times people need a bargain."

Tanger consists of 42 outlet centers with a total of 14.3 million rentable square feet. And, high demand for outlet retail has kept occupancy high -- the portfolio is currently 97% occupied, and this has never fallen below 95% at the end of any year in the company's 23-year public history. There will be plenty of opportunity for growth in the years ahead, as the outlet shopping industry is still relatively small compared to other types of retail. According to Tanger, there is less than 70 million square feet of quality outlet space in the U.S. -- less than the retail space in the city of Chicago.

The company maintains a conservative balance sheet, which should translate to stability and easy access to financing going forward. Debt makes up less than half of the company's capitalization, and the interest coverage of more than 5.2-to-one is among the best in the REIT sector.

As far as dividends go, it doesn't get much better than Tanger. The company has increased its dividend every year since its 1993 IPO, and by an average rate of 13% per year. In fact, the company is a member of the S&P High Yield Dividend Aristocrat index, and currently yields 3.8%.

It's important to mention that no stock is without risk, and these two are no exception. Headwinds in the healthcare or retail sector could cause share prices to drop. As an example, if it becomes difficult to find attractive investment opportunities, it could be a drag on the performance of healthcare REITs like Welltower, since so much of their business model depends on the continuing ability to grow. Or, if the economy hits rough times and outlet sales drop, it could easily knock Tanger's share price down. However, I believe both of these scenarios are unlikely due to reasons I discussed earlier, and that the reward potential more than makes up for these and any other risks.

Finally, these are just two examples of REITs that make excellent retirement investments, and you won't go wrong by adding either one to your portfolio. And, you can take some of the principles I've discussed here, such as conservative balance sheets, strong dividend growth histories, and recession-resistant businesses, to other REITs in order to form a rock-solid income portfolio.