The state of U.S. trade

Long before he was president of the United States, Donald Trump railed against the country's trade deficit, incorrectly equating it to an economic loss. As president, he is finally in a position to do something about this perceived problem. At the beginning of the month, the president announced tariffs on steel and aluminum imports, the second round of tariffs his administration has imposed.

As the U.S., long a standard-bearer for free trade, adopts a more protectionist posture, here are seven things investors (and citizens) need to know about the state of U.S. trade.

The graph below shows the U.S.'s quarterly trade balance, measured in billions of dollars, from 1992 through 2017: 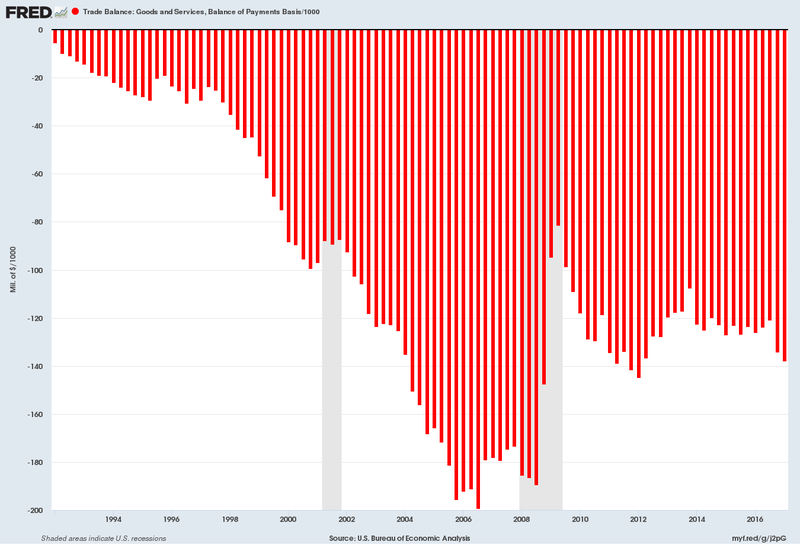 The U.S. has been running trade deficits at least since the early 1990s, and these deficits have been increasing over time (with a significant but relatively short-lived reversal during the Great Recession of 2007-2009).

How does this growing deficit occur? 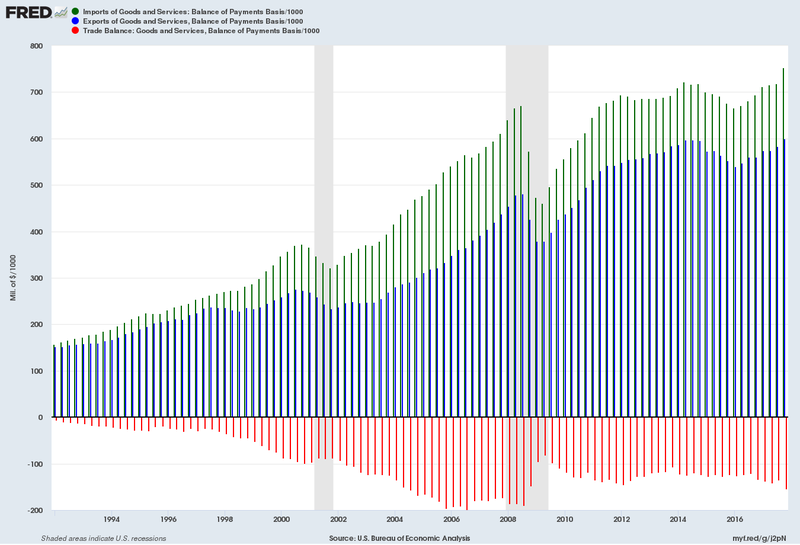 Three things are clear from this graph:

ALSO READ: Trump Tariffs: Is Now the Time to Buy a Washing Machine?

Is the deficit really growing?

The first graph we looked at seems to suggest a deficit that was spiraling out of control, with nothing to prevent it from getting bigger and bigger. However, it's worth remembering two things:

The following graph shows the quarterly U.S. trade deficit as a percentage of the annualized gross domestic product (GDP). Scaled by the size of the economy, the trade deficit is less volatile than it first appeared; since 2010, it has stayed within a relatively narrow range of 0.6 to 0.9 percentage points. 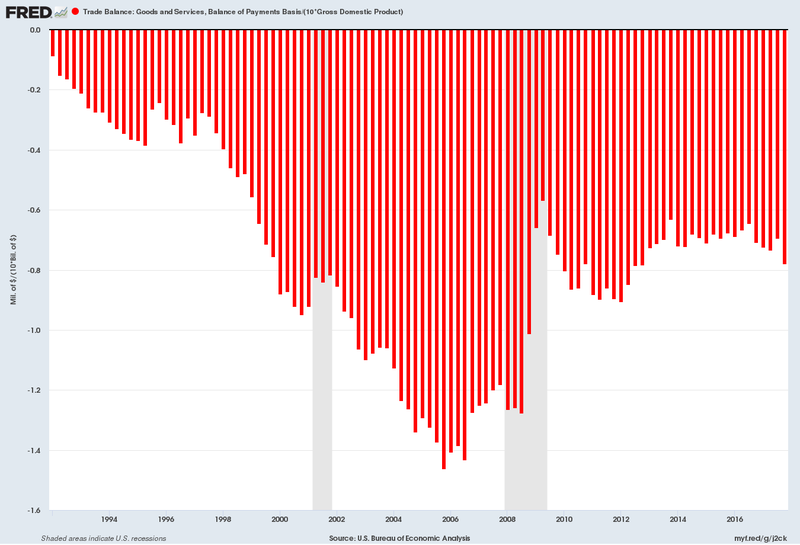 It's no big surprise to see these names on this list: 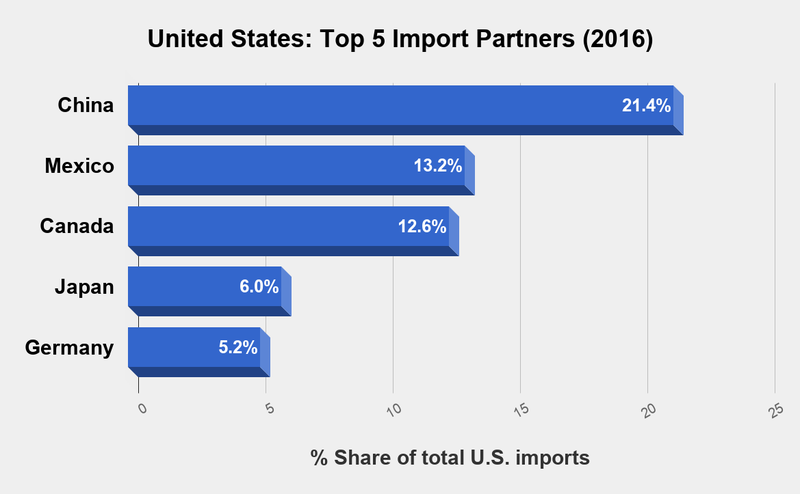 Two of the top five nations in terms of the value of goods and services imported to the U.S. are the countries next-door neighbors. The U.S., Canada, and Mexico form the North American Free Trade Agreement, or NAFTA -- more on that below.

The other three -- China, Japan, and Germany -- are large economies and exporting powerhouses; all run trade surpluses.

Still, the graph highlights the importance of the U.S.'s trade relationships with China, Mexico, and Canada. These three nations account for nearly half of all U.S. imports by value.

The countries that export the most to the States are also among the top destinations for U.S. goods and services. However, when we add the share of total U.S. exports to the previous graph, one nations stands out for the size of the size of its trade (im)balance: Imports from China far exceed the value of U.S. goods and services exported there, to the tune of a $366 billion trade deficit with China in 2016. 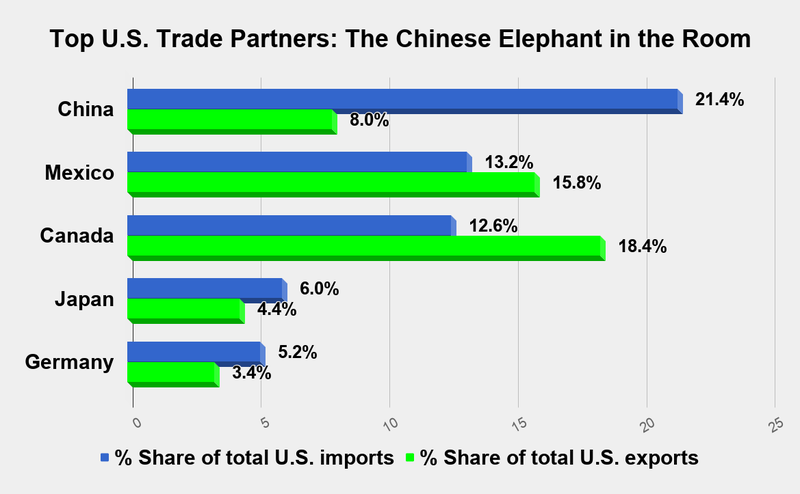 This graph helps to explain why the topic of trade with China is contentious -- especially for officials who believe that running a trade deficit with another country automatically makes you the "loser" in the relationship.

ALSO READ: Most Americans Are Confident About the Economy

The U.S. has free trade agreements in force with 20 countries. Most are small trade partners, but the list includes major partners such as Mexico, Canada, and South Korea.

NAFTA went into effect at the start of 1994 and saw the progressive elimination of all tariffs, duties, and quantitative restrictions to trade by 2008 (excepting some limits on certain agricultural products).

In May 2017, the U.S. Trade Representative informed Congress that the Trump administration wants to renegotiate the terms of NAFTA with Canada and Mexico in order to "support higher-paying jobs in the United States and to grow the U.S. economy by improving U.S. opportunities to trade with Canada and Mexico." One of the administration's specific goals is narrowing the U.S.'s trade deficit with Mexico.

Multiple estimates cap NAFTA's impact on U.S. gross domestic product at a half percentage point per year (at full implementation). That may sound like a small amount, but to put this in context, the gross domestic product grew 4.1% on an inflation-adjusted basis last year. The difficulty in discussing NAFTA's merits is that the economic benefits of increased trade tend to be broadly spread throughout the economy, while the "pain" is borne on a narrow basis (by auto industry workers, for example).

The Trans-Pacific Partnership (TPP) -- a 12-country agreement that originally included the United States, Canada, Mexico, and Japan -- was meant to supersede NAFTA, in that only NAFTA provisions that did not conflict with the TPP (or those that are more expansive with regard to trade) would remain in force.

In January 2017, the United States officially withdrew from the TPP. The remaining signatories renegotiated a new agreement based on the TPP's framework: the Comprehensive and Progressive Agreement for Trans-Pacific Partnership, which they signed this month.

In the construction of the post-World War II international order, there has been a drive to eliminate trade barriers such as tariffs and quotas through multinational agreements such as the General Agreement on Tariffs and Trade (which was replaced by the World Trade Organization).

The United States has been a strong proponent of this drive. Since at least the 1980s, neither political party has been keen on tariffs, which are a tax on a specific class of imports. However, there have been exceptions. In March 2002, George W. Bush's administration placed a tariff of 8% to 30% on imported steel in order to "protect" domestic steel producers against a surge in steel imports (the tariff was lifted less than two years later). Subsequent studies of this tariff suggest the economic impact was neutral to negative.

The trend favoring increased globalization appears to be reversing under the current administration. In January 2018, the administration imposed tariffs on solar panels and washing machines, and, this month, the U.S. imposed tariffs on steel and aluminum. China is the largest manufacturer of solar panels and the largest exporter of washing machines to the U.S.