Introduced in 2009 by a pseudonymous software engineer (or group of engineers) named Satoshi Nakamoto, bitcoin has been hailed as an alternative to fiat currencies (those that have the imprimatur of a government), mainly due to its decentralized, virtual character. Indeed, no government controls its supply: Anyone can compete to "mine" bitcoins through a series of computationally intensive calculations, with the total supply fixed at the outset at 21 million.

However, the truth is that bitcoin does not currently fulfill any of the three traditional functions of money: Medium of exchange, store of value, and unit of account. Call bitcoin a cryptocurrency -- it's a fashionable term. Call it a speculative asset -- it is certainly that. But here are eight reasons bitcoin fails as a currency.

1. It has virtually zero acceptance as a means of payment

The first of money's three functions is to act as a medium of exchange -- being able to use it to pay for goods and services. In that regard, the title of a Morgan Stanley slide from a Dec. 2017 report captures bitcoin's shortcoming succinctly: "Virtually no acceptance and shrinking."

The investment bank found only three e-commerce merchants among the top 500 -- fewer than 1%! -- that accepted bitcoin as a means of payment at the end of the third quarter of 2017. Worse, that number had actually fallen over the prior 12 months (from five)!

(Needless to say, when you move from e-commerce to brick-and-mortar businesses, the rate of acceptance falls from less than 1% to zero, essentially.)

At present, bitcoin fails entirely as a means of payment.

2. There exist low barriers to entry for crypto-competitors

Fiat currencies have an important competitive advantage: They are the coin of the realm. In the United States, for example, Section 31 of the Coinage Act of 1965, entitled "Legal tender," states:

"United States coins and currency (including Federal reserve notes and circulating notes of Federal reserve banks and national banks) are legal tender for all debts, public charges, taxes, and dues."

Furthermore, as investment bank UBS reminded us in an Oct. 2017 report, "[g]overnments set taxes, and tax is the largest single payment in almost any economy."

(That fact alone suggests that bitcoin is unlikely to ever gain wide acceptance as a medium of exchange -- not on a timescale that is relevant to investors, at any rate.)

Meanwhile, the barriers to entry for a new cryptocurrency are low. Indeed, Bitcoin Core, the reference implementation of bitcoin, is an open-source software project (Bitcoin Core is a descendant of the original software released by bitcoin's creator, Satoshi Nakamoto). There is nothing stopping a software developer from using parts of the Bitcoin Core code to create a new digital coin.

Given that there is a fixed supply of bitcoins, when demand outstrips supply -- as is currently the case -- it creates a powerful economic incentive to create a competitor cryptocurrency. Way back in December 2017 (a lifetime ago in the crypto-universe), Morgan Stanley already put the number of different "coins" at 1,400.

ALSO READ: Is Bitcoin Destined to Be a Gigantic Failure?

3. Store of value? Have you looked at the chart?

A second function of money is to act as a store of value. Fiat currencies are not perfect in that regard: Over the past century, for example, the dollar has lost 2.8% of its purchasing power annually (on average). Nevertheless, that rate of decline is slow and relatively steady such that the dollar is an adequate store of value while money is waiting to be re-deployed into productive assets.

The same can't be said for bitcoin, which has experienced extreme price volatility over the past few years. No-one complains on the upside; alas, the price of a bitcoin has fallen up to 60% this year from its Jan. 5 high (it's currently down by approximately one half). 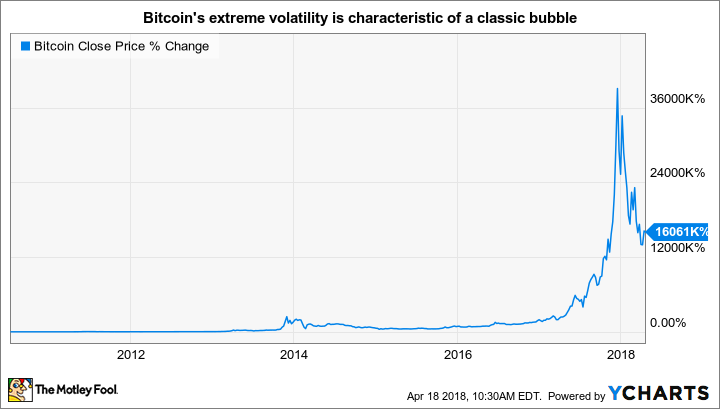 Bitcoin looks like a classic bubble, but whether or not it is one, its manifest volatility, combined with a lack of any fundamental value, disqualifies the cryptocurrency as a store of value.

(Stock prices can be highly volatile, too, but unlike bitcoin, stocks actually have an underlying intrinsic value.)

4. Who's counting in bitcoins?

Just ask Zimbabwean business owners who were updating their local currency prices several times per day during the height of Zimbabwe's hyperinflation in 2008, when prices were doubling every few days. The Zimbabwean dollar was functioning neither as a store of value, nor as an effective unit of account.

(Not surprisingly, the U.S. dollar, the South African rand, and the Botswana pula gained wide acceptance for all transactions -- the Zimbabwean dollar was no longer a good medium of payment, either.)

When even the most ardent bitcoin evangelist calculates their net worth, they convert their bitcoins to come up with a U.S. dollar figure, not the other way around.

Bitcoin mining is the process by which bitcoin transactions are added to the public ledger and new bitcoins are created. Using mining software, "miners" compete to produce a computationally intensive "proof of work" to validate pending transactions. The miner that is successful receives a transaction fee and a subsidy of new bitcoins.

According to digiconomist, a research platform on cryptocurrencies, bitcoin mining now requires over 60 Terawatt-hours of electricity on an annual basis (1 terawatt-hour equals 10^12 watt-hours -- one followed by 12 zeros).

For reference, that's roughly equivalent to Switzerland's annual electricity consumption. If you consider that Switzerland is home to 8.5 million people and a $700 billion economy (with companies that include Nestle SA, Roche Holdings AG, Novartis AG, and Glencore PLC), perhaps you'll agree that bitcoin, in its current incarnation, is a wasteful enterprise, particularly since the bulk of bitcoin-related activity is purely speculative.

Such comparisons may be subject to caution given the uncertainty inherent in estimating the electricity consumption related to bitcoin mining, but it's worth noting that, according to a 2017 report from the Cambridge Centre for Alternative Finance at Cambridge University's Judge Business School, only 9% of large cryptocurrency miners themselves believe that the "negative environmental externalities" associated with the mining process are "not an issue at all."

Furthermore, China is the biggest consumer of electricity for bitcoin mining; in 2016, 62% of China's electricity was derived by burning coal.

In terms of environmental impact, bitcoin appears to be exceptionally costly.

6. Not to mention, it's not federally insured!

Compared to many national currencies, including the U.S. dollar, bitcoin presents another disadvantage: No deposit insurance. In the U.S., bank deposits are insured up to $250,000 per account owner.

Prior to the introduction of deposit insurance in 1933, depositors were taking a risk when they turned over their savings to a bank (thousands of banks failed during the Great Depression, for example) -- they were in effect making a bet on the reputation of the institution they selected.

This is exactly the same choice bitcoin enthusiasts face when they open an account at a cryptocurrency exchange. As such, they need to do some genuine due diligence regarding these organizations -- the risks are not insignificant.

7. Cryptocurrency exchanges are not bank accounts

Price volatility is far from the only risk that bitcoin owners face. Some of them are discovering that withdrawing their bitcoins is not the same as walking into a bank and asking for cash or a cashier's check. To use banking terminology, the operational risk -- specifically, settlement risk -- associated with owning bitcoins appears to be significant.

Take Coinbase, for example. Backed by prestigious venture investors including Andreesen Horowitz, the company bills itself as "a digital currency wallet and platform where merchants and consumers can transact with new digital currencies like bitcoin, ethereum, and litecoin", and boasts 10 million users and over $50 billion worth of transactions.

A visit to the Better Business Bureau's website tells a less flattering story with over a thousand customer complaints, including 378 to which Coinbase did not respond. Indeed, in Jan. 2018, Coinbase notified the BBB that: "Given the… unprecedented growth in the cryptocurrency space, our support capacity has been pushed to the limit, and we will be pausing our BBB responses for the next few weeks... and hope to re-engage sometime on or before March 1, 2018.

Similarly the Coinbase Reddit, which operates as a customer service forum, contains numerous complaints from users with issues such as restricted access to their accounts, unauthorized charges on their bank accounts or waiting weeks (or months!) for their bitcoin withdrawals to clear.

Coinbase is one of the largest operating bitcoin exchanges, -- a seemingly legitimate enterprise -- but we haven't even gotten into the incidence and scale of outright theft of bitcoins yet.

8. Bitcoin may be virtual, but bitcoin theft is very real

Last December, Reuters reported that a total of over 980,000 bitcoins have been stolen from bitcoin exchanges, for an aggregate value of roughly $8 billion at current prices.

Let's put that number into perspective: 980,000 bitcoins represents nearly 6% of all the bitcoins currently in circulation and nearly 5% of the total possible supply of bitcoins (21 million according to the current protocol). That's an astonishing incidence of theft for an asset that was introduced less than a decade ago. No wonder many users choose to keep their bitcoins in "cold storage/ wallet" (a storage medium that isn't connected to the internet).

The blockchain technology that supports bitcoin appears to have some interesting properties, even in terms of security; however, it's clear that bitcoin exchanges, as a group, are not currently reliable custodians of their customers' assets.

Everyone would rightly be concerned about the security of their bank or brokerage assets if Bank of America or Charles Schwab suddenly announced that the bulk of their customer assets had been stolen. That's exactly what the then-largest bitcoin exchange, Mt. Gox, told its users just four years ago; numerous other thefts have occured since then.

Bitcoin is no currency, but...

Bitcoin currently fails on every measure as a currency; furthermore, I think it's unlikely to ever become one for the reasons presented previously.

(I do think the blockchain technology, on which bitcoin rests, does hold promise -- though not necessarily to replace existing currencies.)

However, bitcoin does present three characteristics that are ideal for a speculative asset:

It's little wonder, then, that bitcoin has captured the imagination of speculators and inflated into a spectacular bubble (which now appears to be deflating).