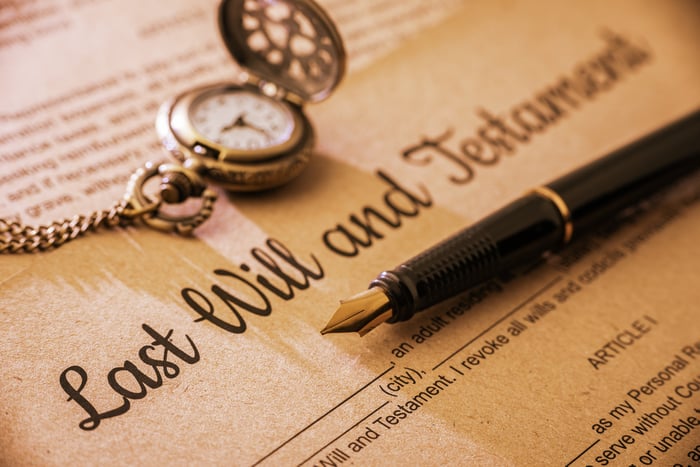 The estate tax is one of the most hated taxes in the U.S. tax code, especially among those who are wealthy enough to have to pay it. Many wealthy families have used complex strategies involving wealth transfers to grandchildren, great-grandchildren, and other remote descendants in order to avoid paying estate taxes generation after generation. In response, Congress created the generation-skipping transfer tax, also known as the generation-skipping tax or GSTT, to close the perceived loophole.

What generation-skipping tax does
The idea behind the GSTT is pretty simple. The general concept of the estate tax hinges on the assumption that most people leave money to their spouses first, then to children, then to grandchildren and more remote descendants. The estate tax grants an unlimited deduction for marital gifts, but when assets move down to the children's generation, tax is usually collected. Later, when the child dies, those assets subsequently go to grandchildren, with the IRS collecting another round of estate taxes.

Wealthy families, however, could afford to give substantial amounts directly to grandchildren and more remote descendants. To ensure those gifts are treated consistently with the policy behind the estate tax, the generation-skipping tax imposes a second level of tax liability on gifts made to grandchildren or those who are more than 37-1/2 years younger than the person making the gift or bequest. The GSTT applies the same 40% tax rate to gifts that the regular estate tax applies to direct inheritances. In essence, the GSTT ensures that grandchildren end up with the same amount of assets that they would have had if their inheritance had come down through their parents rather than coming straight from their grandparents.

Obviously, outright gifts to grandchildren, known as direct skips, are generally subject to GSTT, but it's important to understand that the generation-skipping tax can apply in more complex situations. So-called indirect skips occur when trusts set up for multiple generations start to have their vested interests held by grandchildren and more remote descendants. Accordingly, the generation-skipping tax can become due not just at the time a trust is set up, but also years or even decades into the future once remote descendants become the primary beneficiaries of trusts set up on their behalf.

How to avoid generation-skipping tax
Because the GSTT is so draconian -- and complicated -- most estate planning strategies aim to take maximum advantage of legal opportunities to avoid paying the tax. There are several ways to do so.

First, everyone has a lifetime exemption from the generation-skipping tax. For 2016, that amount is $5.45 million, and it gets adjusted for inflation each year. People with estates smaller than the exempt amount generally don't have to worry about GSTT at all, as they can allocate the exemption amount to their assets with room to spare.

Second, you can make gifts annually to grandchildren and others subject to GSTT without triggering tax liability. For 2016, the maximum annual gift is $14,000. The gift amount is also annually adjusted for inflation.

Third, there are situations in which someone can make what would otherwise be a generation-skipping gift without having it treated as such for tax purposes. The most common is known as the "deceased parent" rule, and it makes sense in the context of normal estate planning. Ordinarily, most people prefer to leave equal amounts to their children when they die. But if one of their children dies before them, then they'll take the amount that would have gone to that deceased child and instead leave bequests for the grandchildren in that family line. The GSTT rules respect that natural inclination by making it OK to make gifts to grandchildren if the grandchildren's parent has already passed away at the time of the gift.

The generation-skipping tax is one of the most confusing elements of estate tax law, and most people prefer to avoid it when they can. By planning well, you can make the best use of your GSTT exemptions and minimize the amount of extra tax that will go to Uncle Sam instead of your family.