Please ensure Javascript is enabled for purposes of website accessibility
Log In Help Join The Motley Fool
Free Article Join Over 1 Million Premium Members And Get More In-Depth Stock Guidance and Research
By Matthew Frankel, CFP® - Apr 10, 2017 at 8:27AM

The tax deadline is rapidly approaching. If you might not be able to file on time, you need to read this.

The April 18 tax deadline is rapidly approaching, and it may be coming too fast for many people. There are several reasons you might not be ready to file your taxes by the deadline -- maybe you're still gathering documentation, for example. Fortunately, it's not too difficult to get extra time to file your taxes if you need it. Just be sure you understand how the extension process works.

The first thing you need to do if you're not going to be able to file by the April 18 tax deadline is to file an extension. You can do this with IRS Form 4868 (here's the current version you'll want to use in 2017 for your 2016 tax return). 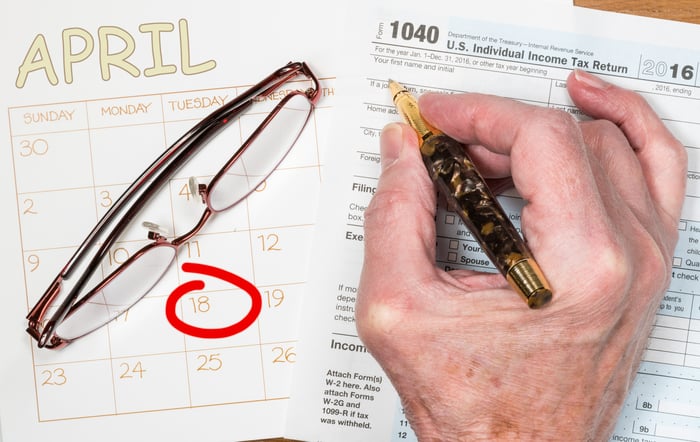 This form gives taxpayers who submit it by the deadline an automatic six-month extension of the tax return deadline. For the 2016 tax year, the extended tax deadline is defined as Oct. 16, 2017. Generally, this is the only extension that can be granted, unless you're living out of the country.

It's also important to point out that the tax deadlines are only enforced if you owe the IRS money. If you're entitled to a tax refund, the IRS is glad to hang on to it for as long as you'll let them. In fact, you have three years from the original tax deadline to claim a refund, after which point it becomes the property of the U.S. Treasury.

You still need to pay any tax you owe on time

If you choose to file an extension, you'll get an additional six months to file your tax return. However, an extension does not give you more time to pay any balance you owe. In fact, line four of the form to file a tax extension asks you to estimate your total tax liability for the year, and you're expected to pay this amount by the April 18 deadline, even if you file an extension.

Furthermore, it's important to try to make your estimate as accurate as possible. Unless you pay at least 90% of the tax you owe by the regular due date, you'll have a late payment penalty and interest added to the balance once you eventually file your return and pay the remaining amount.

Speaking of interest and penalties, if you're going to file your return after the deadline, it's important to keep these in mind.

Interest is charged on any unpaid tax balance from the regular filing deadline until the balance is paid, even if you had a valid reason for paying late. As of this writing, the IRS interest rate on unpaid balances is 4%, but this is subject to change at any time, and likely will rise if the Federal Reserve continues to raise interest rates as expected.

The late-payment penalty is assessed in addition to interest, and is 0.5% of the unpaid tax per month, or partial month, the tax remains unpaid, to a maximum of 25%. As I mentioned earlier, if you pay at least 90% of your 2016 tax by the regular due date, and pay the balance with your return, no late penalty will be assessed.

The late-filing penalty is much higher, at 5% of the unpaid balance per month or partial month, to the same 25% maximum. If you're more than 60 days late, the minimum penalty is $205 or the balance you owe, whichever is smaller. Therefore, if you aren't able to pay the taxes you owe, it's still better to file your return anyway and get hit with the late payment penalty instead.

Millions of Americans file tax extensions every year, and getting an extension is an easy procedure. However, it's important to be aware of how tax extensions work, and the penalties and interest you might face if you don't pay or file on time.