Please ensure Javascript is enabled for purposes of website accessibility
Log In Help Join The Motley Fool
Free Article Join Over 1 Million Premium Members And Get More In-Depth Stock Guidance and Research
By Dan Caplinger - Nov 5, 2017 at 6:47AM

Find out how flex accounts will change in the coming year.

Millions of workers have access to flexible spending accounts, which are tax-saving vehicles that let you set money aside on a pre-tax basis from your paycheck to cover anticipated healthcare or dependent care expenses. Used correctly, FSAs can produce huge tax savings, and limits on contribution amounts typically get adjusted each year. In 2018, the amount you can put in an FSA will rise slightly compared to 2017 figures. Below, you'll learn more about what changes are slated to take effect in 2018 and why flexible spending accounts have been such a popular way for workers to save.

The key change for flexible spending accounts in 2018 affects those who use FSAs for healthcare costs. The annual limit is tied to the inflation rate, and price increases over the past year will lift the contribution limit to $2,650 for 2018. That's $50 higher than the corresponding figure was in 2017.

It's important to understand the distinction between medical FSAs and dependent care FSAs. If you're saving money for child care costs, then a fixed annual limit of $5,000 applies to nearly all taxpayers, with the only exception being a lower $2,500 maximum for married couples who file separate returns.

One thing that married couples need to keep in mind is that the FSA contribution for dependent care can't be larger than the lower-earning spouse's earned income. The net impact of this provision is to prevent one-earner families from using flexible spending accounts while reducing the ability for those whose spouses have part-time work that doesn't produce enough in earnings to rise above the $5,000 limit. Two-earner families in which each spouse has access to a dependent-care FSA have to apportion the $5,000 maximum between their two accounts, rather than being able to save a total of $10,000. 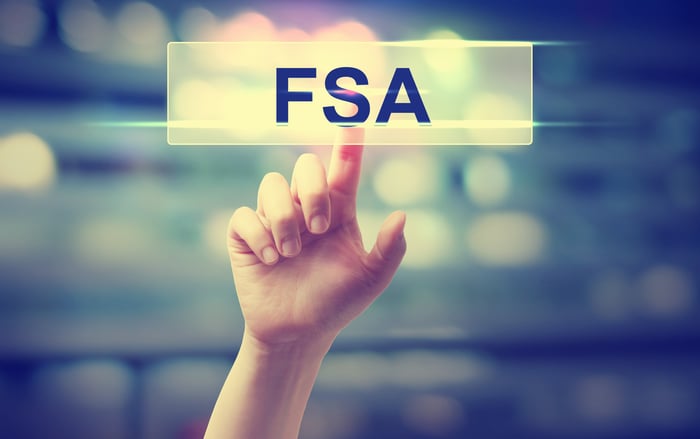 The pros and cons of FSAs

Flexible spending accounts come with the advantage of letting you have money taken out of your paycheck on a pre-tax basis to go toward healthcare or dependent care expenses. When you have a certain amount taken out of your check, your take-home pay won't go down by as much, because your tax withholding will adjust to reflect the fact that the money saved in the FSA isn't subject to tax. In addition, you'll also save on withholding for Social Security and Medicare payroll taxes, saving you up to 7.65% of your contribution amount.

The downside of FSAs is that you have to determine accurately how much you're going to need to spend. If you don't use the money you save in an FSA, then you typically have to forfeit it. The general rule is that you must incur eligible expenses by the end of the calendar year, although you'll have some time after year-end to submit documentation for those expenses.

Some employer FSA plans give you more flexible options. Employers can give workers a grace period that lets you spend money from the previous year through March 15 of the following year. Alternatively, they can let workers carry over up to $500 from a healthcare FSA into the following year. An employer must choose between these two options -- they can't give you both the grace period and the carry-forward provision. Be sure to check with your employer to see whether either of these provisions will apply to your FSA.

Should you use an FSA?

The biggest benefits of FSAs go to those who know that they'll need to spend at least the maximum contribution limit on healthcare. With no risk of forfeiture, the tax savings are essentially free money. By contrast, those who typically spend little on healthcare might not benefit from FSA, and the risk of losing money can make it detrimental to use them.

Lastly, FSAs can also have an impact on other favorable tax provisions. Those who want to use the Child and Dependent Care Tax Credit, for instance, should understand that money from a dependent care FSA can't be claimed as eligible spending for the credit. The IRS doesn't let you double-dip, so you'll have to decide which tax break is worth more to you.

2018 will bring FSA users a small increase to their contribution limits. Be sure to see how much an FSA would save you if your employer offers one. Doing so can help you cut your tax bill significantly.