When it comes to your taxes, the term "income" isn't quite as straightforward as you might think. In fact, there are three distinct forms of income you may have, and a variety of different tax implications your income might have. With that in mind, here's a rundown of the three main categories of income and what each one could mean to your tax bill.

This is the category most Americans often associate with the term "income." Earned, or active, income includes money earned from a job -- salaries, wages, bonuses, and tips. It also includes self-employment income, such as from work done as an independent contractor, and income from a business that you actively participate in. 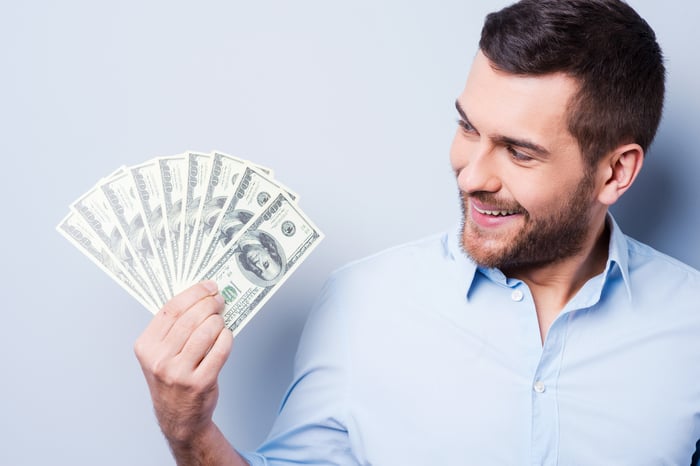 This category also includes alimony that you receive, as well as certain forms of retirement income like pensions and distributions from 401(k)s and traditional IRAs. While these forms of income aren't being actively earned, they originate from your (or someone else's) earned income, so they are taxed as such.

Speaking of taxes, earned income is taxed according to the marginal tax rates, or tax brackets. For 2018, the U.S. tax brackets have changed significantly as a result of the Tax Cuts and Jobs Act:

You can read a thorough discussion of how marginal tax brackets work in my guide to how the IRS calculates your income tax, but the quick version is that you only pay a marginal tax rate on income within that range. As a simplified example, let's say that you're single and after credits and tax deductions, you have taxable earned income of $40,000 for 2018. Your income tax will be calculated according to the marginal tax brackets in the chart above as follows:

This category includes income you derive from investments, mainly interest income, capital gains, and dividends. And there are different tax rules that apply to each of these categories.

Interest income is generally taxed as ordinary income. This includes interest from checking and savings accounts, CDs, loans you make to other people, and most bond interest. The main exception is interest paid by municipal bonds, which is typically exempt from federal income tax.

Capital gains refers to the profits that arise when you sell an asset for more than you paid for it, and are taxed in one of two ways, depending on how long the investment in question has been owned. If the investment has been owned for a year or less, the capital gain is considered to be short term and is taxed in the same manner as earned income, as we discussed in the first section.

On the other hand, long-term capital gains result from the sale of assets owned for at least a year and a day and are taxed at preferential rates. For 2018, the capital gains tax brackets are:

Most stock dividends paid by U.S. companies are considered to be qualified dividends and are taxed at preferential rates, just like long-term capital gains. In addition to the requirements for a stock's dividends to be qualified, investors must hold the stock for a minimum length of time in order to take advantage of the preferential tax rates. Two big exceptions to the qualified dividend criteria are real estate investment trusts (REITs) and limited partnerships, which we'll get to in the next section.

The biggest distinction you need to know is that passive forms of income are generally taxed in the same way as ordinary income, not as qualified dividends. However, as we'll discuss in the next section, there's a big tax break that may be available if you have passive income.

The Tax Cuts and Jobs Act added a big deduction for "pass-through" income, so as a final point, let's touch on what that means.

Passive income and pass-through income aren't exactly the same thing. Pass-through income is a broader category, which includes passive income as well as certain types of earned income, like income earned through self-employment. There are income restrictions on who can claim the deduction, so consult a tax professional if you think you may be eligible.