2019 is coming to an end, and tax season is right around the corner. Getting this year's tax returns prepared and filed shouldn't be nearly as big a challenge as it was last year, because there haven't been nearly as many changes to tax laws taking effect in 2019. That comes as a big relief after tax reform measures took effect for the 2018 tax year.

There are thousands of pages of tax laws that impose a wide variety of taxes as well as offering a similarly extensive set of tax breaks. There's therefore simply no way to give a definitive one-size-fits-all answer to how much someone making a certain amount of income will pay in federal income taxes. However, using some basic assumptions, you can come up with estimates that cover some common situations. Below, we'll look more closely at what upper-middle income households making $125,000 in 2019 can expect to see on their tax returns in the coming months. 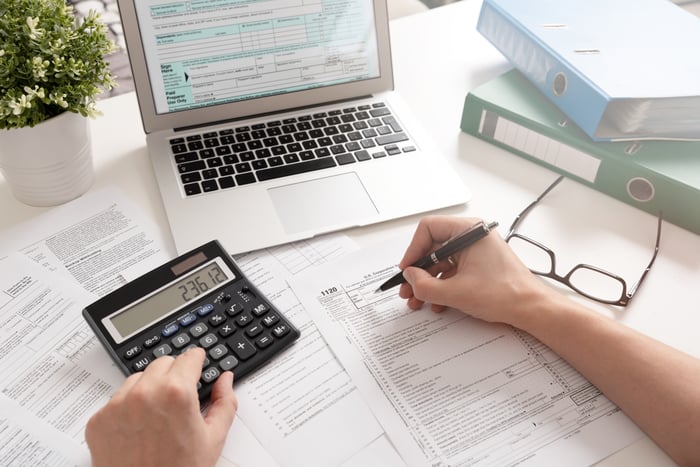 What a family can expect to pay in 2019 taxes

The typical family saw a fairly extensive tax cut on their 2018 tax returns, with features like the doubling of the child tax credit playing a key role. However, with the rules having stayed largely the same this year, typical families will see only modest changes to their tax liability if their income levels stayed the same.

As an example, a married couple who file jointly, have two children, and make a combined $125,000 from their jobs can expect to see the following in 2019 compared to 2018:

What a single person can expect to pay in 2019 taxes

Those who are single without children have a somewhat simpler situation, and the results are relatively comparable. Again, the savings is due to changes in the standard deduction as well as the higher tax bracket thresholds.

Some other things to keep in mind

These assumptions aren't unreasonable, but hardly anyone is actually in the exact situation that those hypothetical taxpayers face. Typically, you'll have other things to take into account. For those making $125,000, that might include the following:

Be smart about your taxes

For the most part, upper-middle-income taxpayers making $125,000 aren't likely to see big changes in their taxes in 2019. Nevertheless, it still makes sense to look for ways to plan more effectively in order to take maximum advantage of any potential tax savings that's available to you.