Please ensure Javascript is enabled for purposes of website accessibility
Log In Help Join The Motley Fool
Free Article Join Over 1 Million Premium Members And Get More In-Depth Stock Guidance and Research
By Dan Caplinger - Mar 18, 2020 at 7:16AM

Coronavirus concerns have a lot of workers looking at their benefits.

The COVID-19 outbreak has had a huge impact on the way people live and work, and many workers are finding their jobs directly affected by the pandemic. Many workers who believe they might have gotten exposed to coronavirus have chosen to quarantine themselves, and others might find themselves in a position to have to consider self-quarantine measures in the near future.

For those fortunate enough to have paid sick leave, the benefits they've earned will help them replace lost income for as long as their paid leave lasts. Yet one question that often comes up is whether those receiving sick leave pay will see their take-home benefit reduced by taxes. Unfortunately, the answer is often yes, but there are some situations in which pay for injury or illness escapes taxation. Below, we'll look at the rules governing sick leave pay and taxes. 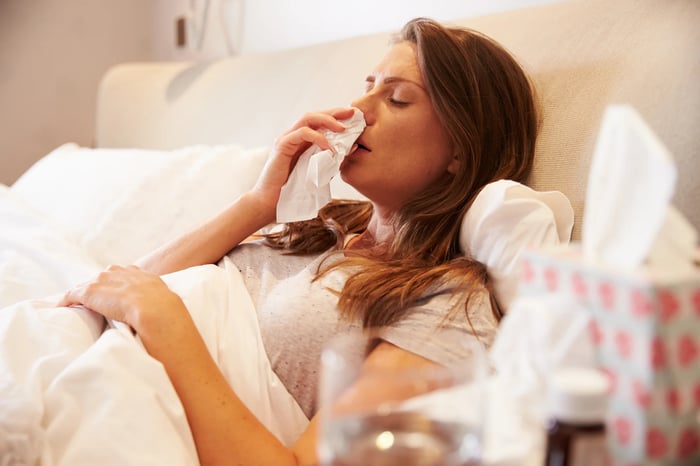 Most of those who are eligible for sick leave pay get their benefit directly from their employers. If that's the case, then sick leave pay is generally included in your federal taxable income. That means that you'll have to pay income taxes on the money you receive as sick leave.

In addition, your employer is typically required to treat your sick leave pay the same way it does any other compensation you receive. Accordingly, you'll see money withheld from your paycheck to go toward Social Security and Medicare payroll taxes as well.

Put simply, if your employer's the one to pay your sick leave benefits, then the taxes you pay will look almost exactly like what you owe on regular work pay.

When you get third-party sick leave benefits

The tax rules for sick leave pay get a bit more complicated when someone other than your employer is making payments. Most often, third-party sick leave comes through insurance companies, and here, the key questions are who provided for the third-party coverage and whether you were responsible for any of the premiums for that coverage using either pre-tax or after-tax dollars.

If your employer pays the premiums for third-party sick leave, then benefits are generally included as taxable income and also subject to payroll taxes. However, payroll taxes are no longer imposed if the sickness lasts longer than six months after the employee last performed work for the employer.

If you pay the premiums for third-party sick leave, then their taxation depends on whether you used pre-tax or after-tax money to pay the premiums. If your employer lets you have money withheld from your paycheck on a pre-tax basis to go directly to the insurance company responsible for providing coverage, then when those benefits get paid out, they'll be subject to income tax. They'll also typically have to have payroll taxes withheld.

By contrast, if you pay for third-party sick leave coverage entirely with after-tax dollars, then the benefits you receive won't be subject to income tax, and there won't be any payroll tax implications. Just as you got no tax benefit from making the premium payments for your coverage, you won't have any tax liability from the amounts you received under the insurance.

What other tax issues should I be aware of?

You'll also want to check with your state tax authorities. Most states follow the same rules as the federal government for tax purposes, but there can be subtle differences.

Having to pay taxes  on sick leave can seem like a slap in the face at a tough time. Yet unless the federal government responds to the COVID-19 outbreak with new rules, workers should expect to keep seeing taxes get taken out of their sick leave pay.