Tax season lasts a long time, starting in January and running until your tax returns are due in mid-April. That may seem like plenty of time to get everything ready to prepare your tax return on time. But there are a host of things that can go wrong with that scenario, and every year, millions of people are late filing their tax returns.

Fortunately, as long as you know what to do, the danger of being late with filing your tax return doesn't have to result in a huge mess. In fact, the Internal Revenue Service is extremely lenient in giving taxpayers extra time to get their tax returns filed -- and you don't even have to have a particularly good reason. What you do need to do, though, is to take the necessary steps to ask for help when you need it. Ideally, if you're aware beforehand what you need to do in order to get your tax return prepared, you won't be in a position in which you have to worry about being late filing your return in the first place.

When it comes to filing taxes late, there are eight key questions many people have. Below, we'll give you the answers to those questions, along with some helpful tips for avoiding the problems that can arise if you get yourself in a bind with your tax-return preparation. 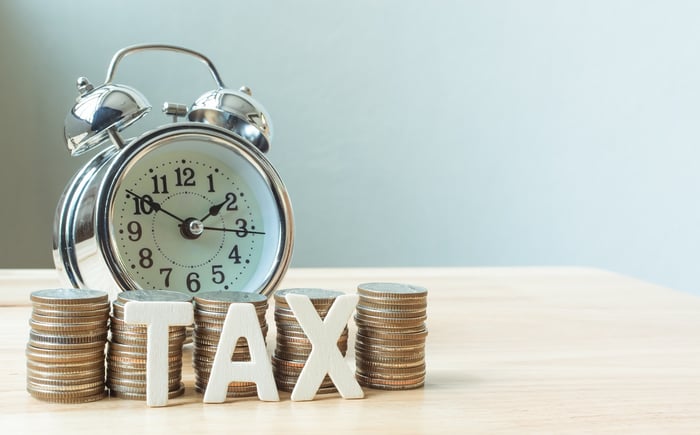 Why do people file their taxes late?

At first glance, there might not seem to be any good excuses for filing your taxes late. After all, most taxpayers know quite well when their tax returns are due, and the timeline typically gives you several months to gather all of the necessary documents and then do the work to prepare your returns.

However, that doesn't stop millions of taxpayers from missing the tax filing deadline. Here are some of the most common reasons people file their taxes late:

Regardless of the reason for filing your taxes late, you'll eventually need to face the consequences. Below, we'll go into more detail about the facts of late filing and what happens next.

When is my tax filing officially late?

Every year, the IRS sets the tax-filing deadline. For most personal returns, the official due date is April 15, unless that day falls on a weekend or holiday. If it does, then the due date for your tax returns moves to the next available day. So, for instance, if April 15 falls on a weekend or a holiday, but April 16 is a regular weekday, then the tax deadline for that year will be April 16.

Where things get confusing is when there are multiple weekend days and holidays to take into consideration in coming up with the final tax deadline. The most common issue arises with the District of Columbia's Emancipation Day holiday, which occurs annually on April 16. Because the IRS is located in the District of Columbia, D.C. holidays are recognized in the same way as a national holiday. So, if April 15 is a Sunday, and Emancipation Day happens to fall on a Monday, then the tax filing deadline for that year will probably be April 17.

In addition, there are some holidays that only affect people in certain areas. The most common issue affecting taxes is the Patriots Day holiday, which is celebrated in Massachusetts and Maine on the third Monday of April. That can give taxpayers in those states an extra day to file, but it's important to understand that taxpayers elsewhere do not have extra time before their tax return will be considered late.

What penalties are involved with late filing?

The IRS imposes a penalty if you file your return late. That penalty is based on the amount of taxes you owe on the return you should have filed. For each month or part of a month that you're late, you'll owe 5% of the amount of tax due. The penalty for late filing maxes out at 25%, meaning that if you're more than four months late filing your return, you'll owe the maximum.

The interesting thing about the late filing penalty is that because it's calculated based on the amount of tax you owe, there's technically no penalty if you don't actually owe tax or would be due a refund. Nevertheless, the IRS can still take action to get you to file a return. And as a matter of common sense, if filing a return will get you a refund, you should do so. If you go more than three years past the original April due date for a particular tax return, the IRS won't let you claim a refund by filing late. So if you're owed a refund, it's important to get the return in before that three-year deadline.

One other thing to keep in mind is that if your return is more than 60 days late, a potentially higher penalty becomes due. The minimum penalty in that case becomes the lesser of 100% of the tax that you failed to pay or $205. Again, this doesn't result in a penalty if you don't owe tax, but it's still an important consideration to keep in mind.

How can I get my tax returns prepared on time?

The best way to get your tax returns prepared on time is to plan out a complete schedule that breaks down the process into steps. For instance, here's a short version of a timeline you could use to file a return by mid-April:

What if I don't have all of the tax forms I need to do my return?

It's not unusual for someone responsible for getting you a vital tax document to be negligent in getting that form to you. The problem with preparing your return without that information is that it's likely to result in your filing an incorrect return, and that will leave you with the unappetizing requirement of having to file an amended return with the corrected information.

The smarter thing to do is to be aware of the deadlines for getting your tax forms and then to promptly contact your employer or financial institution if they don't get the forms to you on time. That way, once they correct the problem, you should still have plenty of time to get your returns prepared and filed.

If I know I'm going to be late, what should I do?

Sometimes, despite your best efforts, you don't have any choice -- you just need extra time. That's OK! The IRS has made it easy to solve the problem: Just file for an extension.

Many taxpayers don't understand just how easy it is to get an automatic extension of time to file their returns. You don't have to provide a reason at all in order to get an extension, let alone a good one. All you need to do is file the appropriate IRS form, Form 4868.

How much extra time can I get with an extension?

An automatic extension gives you six extra months to file your return. Technically, the extended deadline is Oct. 15, with the same rules applying to give you an extra day or two if the original Oct. 15 deadline falls on a weekend or holiday.

An extension only gives you extra time to file your tax return. It does not give you any extra time to pay the tax that's due. You'll notice on the extension form that there is a space for you to indicate how much tax you expect to owe, and you're expected to pay that tax along with your extension request. Fail to do so, and you'll owe a smaller penalty for failing to pay your taxes on time -- even though you'll avoid late filing penalty because of the extension. At just 0.5% for each month or part of a month that you're late in paying your taxes, the penalty is a lot cheaper than the 5% amount you'll owe for a late filing.

What if I need even more time?

The IRS is generous enough to give everyone up to six extra months to file their returns, but the downside is that beyond that point, it's difficult to get further extensions. There are only a couple of situations in which additional time is available:

Make the right move with your tax returns

With months to get your tax return prepared on time, there's little reason you'll ever need to be late. But if circumstances beyond your control put you into crunch time, the easiest way to avoid being late with your tax filing is to request an automatic extension. That way, you'll get the extra time you need to get everything done right, and as long as you're smart about complying with all of the rules involved in getting an extension, the process will be as painless as possible.