Wynn Resorts at its heart is still a Las Vegas company, despite Macau now dominating its results.

Wynn Resorts at its heart is still a Las Vegas company, despite Macau now dominating its results. The company began when Steve Wynn bought the Desert Inn in 2000 for $270 million with a vision of building another luxury resort like Las Vegas had never seen. He didn't disappoint, and the $2.7 billion Wynn Las Vegas opened in April 2005 with a $2.3 billion expansion called Encore following in 2008.

At the time these resorts were built, Las Vegas was booming, but when the recession hit, operators realized that supply had hit a limit and results began to suffer. In 2009, Wynn's earnings before interest, taxes, depreciation, and amortization (EBITDA) fell to just $244.1 million in Las Vegas, a very low return for a $5 billion investment. Since then, returns have increased slightly, but Vegas is no longer the high-return investment it once was. In the last four quarters through third-quarter 2012, EBITDA has increased to $382.3 million for the region.

The Las Vegas market has been improving since the Great Recession, but expectations for this area need to be lowered. Las Vegas gaming growth will likely remain in the single digits for the foreseeable future, and upside for Wynn will be limited as a result. But investors looking at Wynn will be focused on Macau going forward.

Macau has grown to five-and-a-half times the size of the Las Vegas Strip, with $33.6 billion of gaming revenue in 2011. Wynn is just one of six concessionaires in the region and has a strong position in the all-important VIP market.

Stanley Ho's monopoly on gaming ended in 2004, and since that time the market has grown at a compound rate of 30%. But in 2012 that growth has slowed, and we will likely end the year with growth in the low teens. This slowed growth and expansion on Cotai has sucked the growth out of Wynn Macau, which has been relatively stagnant over the past two years, as you can see below. 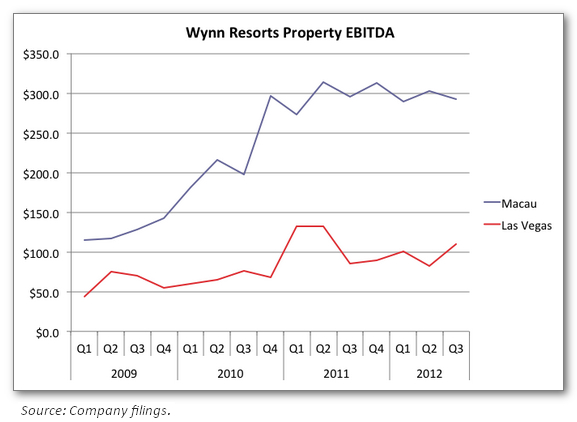 The company's resorts may not be growing, but we need to keep in mind that it is highly profitable. As Macau grows this will likely continue, even if market share on Cotai grows. Luckily, Wynn's presence on Cotai is just around the corner.

The next phase of Wynn's investment in Macau is a resort on Cotai, which is set to be open in 2016. Cotai has become the hottest spot in Macau because it was a blank canvas for gaming operators, allowing incredible creativity in design. So far, Las Vegas Sands, Galaxy, and Melco Crown have built resorts in the area, and Wynn will be the first to build in the next phase of construction that will include resorts from SJM, MGM Resorts, and potentially another resort by Melco Crown.

Wynn's $3.5 billion to $4 billion resort will include 2,000 hotel rooms, 500 gaming tables, 10 restaurants, convention space, a spa, a nightclub, and an eight-acre lagoon. As you can see below, the development is located near the ferry port and the Macau International Airport, two major entry points for gamblers. This is ideal for access, but it is on the eastern edge of Cotai, which doesn't make the site as attractive as others. 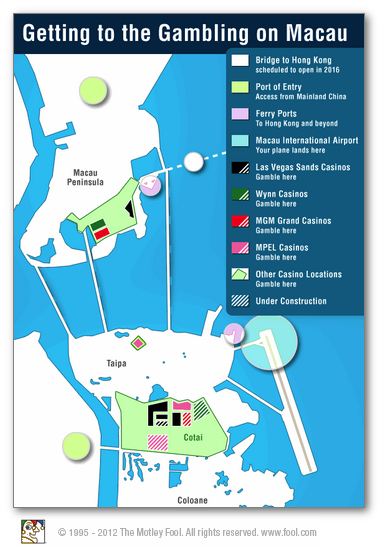 The resort will be completed around the same time as the bridge to Hong Kong (labeled above) and a light rail system that will connect the Macau Peninsula to Cotai. These projects could pose challenges as far as getting labor during construction, but so far Wynn doesn't see any issues.

Financially, the opportunity for Wynn on Cotai is enormous. Wynn's current resort generated $1.2 billion in EBITDA over the past year from 1,400 hotel rooms and about 225 table games. The new resort will have 40% more rooms and more than twice as many table games. This could more than double the company's revenue and EBITDA in Macau considering the trend toward Cotai and continued growth in Macau. If that's the case, the stock could easily double or more by the time the resort is fully operational.

Not only is the future of Wynn outstanding, the payout in the meantime is good as well. Wynn has intentionally positioned its stock as a relatively high-yielding stock with upside from special dividends. The company plans to pay a $1 quarterly dividend beginning in 2013 and has announced an $8 special dividend for November 2012. This special dividend shouldn't be counted on by investors, but the company has a history of paying a high dividend when cash levels allow it.