Please ensure Javascript is enabled for purposes of website accessibility
Log In Help Join The Motley Fool
Free Article Join Over 1 Million Premium Members And Get More In-Depth Stock Guidance and Research
By Keith Speights - Updated May 16, 2017 at 10:10AM

More businesses survive past their first year than you might expect. And that could be bad news for entrepreneurs.

Starting a new business can be a scary proposition. Perhaps the scariest thing of all is knowing that most businesses won't be successful.

What's the percentage of businesses that fail in their first year? It's lower than you might think. Here are the details -- and why a relatively low number of first-year business failures might actually be a bad thing. 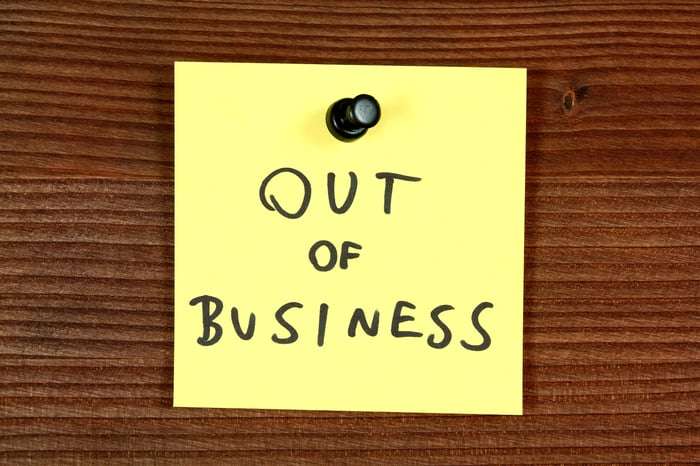 Roughly 80% of new businesses survive past their first year of operation. That was the case two decades ago and is still the case today. However, around half of all businesses no longer exist after five years. Only one-third make it past their tenth anniversary. These statistics have been remarkably consistent through the years. Interestingly, major economic downturns don't seem to affect the survival rates for new businesses.

The good news is that survival rates begin to flatten out after several years of operation. The longer a business lasts, the more likely it is to last even longer.

Keep in mind also, though, that a business that discontinues operations isn't necessarily a failure. Sometimes owners sell businesses or retire.

The reality, still, is that many businesses do fail. According to the 2015/2016 Global Entrepreneurship Report published by Babson College and several other organizations, over half of discontinued businesses halted operations because of lack of profits or financial funding.

A big issue is under-capitalization at the outset of starting a business. Business owners frequently underestimate how much money will be needed to fund operations. At the same time, they can overestimate how quickly their products and services will catch on in the marketplace.

Entrepreneurs are usually by nature highly confident. The problem is that confidence sometimes leads to overconfidence. I have worked in management with two start-up companies in my career. In both cases, I thought the market would quickly adopt the innovative technologies the companies offered. In both cases, I was wrong.

A primary challenge for the first start-up with which I worked was that the types of customers we targeted preferred dealing with larger, more established vendors. Even though we felt that our product was better than the competition, we were at a disadvantage because of our size.

My second start-up experience was as CEO of a healthcare technology company. We were able to steadily attract customers, but the process went more slowly than anticipated in large part because of lengthy sales cycles. We thought customers would see the value in the product and make decisions quickly. Many did see the value, but were nonetheless slow to finalize a purchasing decision.

The benefits of failing fast

It would be great if more businesses were successful and lasted for decades. However, history shows us that's not likely to happen. In light of this, my opinion is that it would be better for more than just 20% of businesses to fail in their first year of operation. That might surprise you, but there's a good reason for my viewpoint.

If you're destined to fail, wouldn't it be better to get it over as soon as possible -- like ripping off a Band-Aid quickly to avoid prolonged pain? I think so. There are distinct benefits to failing quickly rather than slowly. Total losses would be reduced considerably. Business owners would be able to shift gears more quickly into a -- hopefully -- more profitable endeavor.

But how can you fail fast instead of failing slowly? I suggest thinking about your start-up business in a similar way to how drugmakers think about experimental drugs.

They first conduct pre-clinical testing in animals to determine if human testing might be worthwhile. The first phase of human testing typically involves a small number of patients. Subsequent phases add more patients to the studies.

At every step in the process, there are predetermined primary outcome measures (and often secondary outcome measure as well). If the target outcomes aren't met, the drug usually doesn't advance to the next phase.

Following this process, entrepreneurs could determine ahead of time what financial results you would truly consider to be acceptable during each quarter of the first year. If the business doesn't meet those levels, evaluate why they weren't met. Unless you have a really good plan to resolve the issues, it might be best to cut your losses early.

By the way, drugmakers have many more failures along the way than they have successes. But they don't quit developing new drugs. They simply realize that's the reality of the business and adjust accordingly. If they didn't fail quickly enough with experimental drugs that aren't safe or effective, their overall success would actually be much lower.

This is a point worth thinking about before you launch a business. Failure really isn't failure if it improves your overall prospects for success. As Thomas Edison said after repeated unsuccessful attempts to create an incandescent light bulb, "I have not failed. I've just found 10,000 ways that won't work." The sooner you identify what doesn't work, the sooner you can find out what will.