Imagine that a few weeks ago, you printed out your business's four most important metrics on separate sheets of paper, taping one to each wall of your office. Today, there's a fire in the building (dramatic, I know, but bear with me). You have just enough time to run into your office and grab one of the four sheets. Which will you choose?

To pose the same question another way: If you had to boil down your analysis to a single measurement to increase the success of your organization, what would that metric look like?

As a CPA advising privately held businesses on strategy and finance, I've asked this of entrepreneurs for years. Put on the spot, those who haven't previously considered the question often cough up an answer like "revenue growth" or "higher profits." This type of response isn't necessarily poor, but think about it -- what business doesn't want more revenue, or higher profits?

Knowing your most important business measurement presupposes that you've done the work, as in the example above, of isolating a handful of essential, or "key" metrics. Key metrics are those that are so vital, they often function as starting points for corporate strategy: Management takes their reading and then tries to dream up how future readings can be improved.

In the airline industry, key metrics include revenue per available seat mile, or RASM. RASM is a key metric because it spreads operating revenue across all seats that were available on flights over a given time period -- and not simply the seats an airline sold. The airline industry carries high fixed costs, so allocating revenue among all available seat miles illuminates the relationships between revenue, costs, and capacity.

In a software environment characterized by recurring sales, it makes sense to measure frequency over a base of customers. That's why companies like payments platform PayPal (NASDAQ:PYPL) find it so important not just to add new customer accounts, but to entice each customer to use the service a bit more each month. PayPal defines payment transactions per active account, measured over trailing-12-month periods, as one of its own key metrics.

Identify your most important key metric, then refine it

For the rest of this article, let's join forces and launch a business together in order to think through the measurement process. And though it's surely a passing fad, let's seize the moment and sell fidget spinners, which are showing up in the backpacks of middle schoolers across the U.S. at a viral rate: 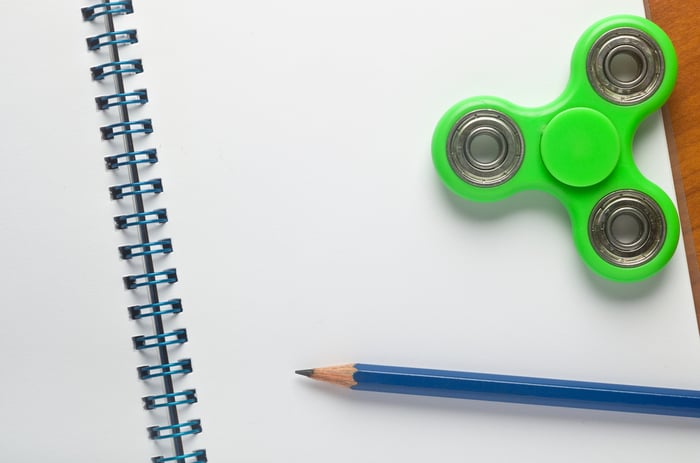 We begin our enterprise with a single product, the "Orange Conundrum With Metal Bearing." Fast forward six months. We've expanded the product line to include the Cosmic Fidget With Plastic Bearing, the Leaf-Green Mini-Fidget, and the SignalSpin Ultra-fast Spinner.

Since the company is in a very early stage, we place a great emphasis on revenue growth and capturing market share. So, we alight on an initial common-sense measurement as our most important key metric; the number of fidget spinners sold per month.

But because you and I both trust in the power of data, we know we can refine this metric. Here's a table of our average monthly sales, unit costs, and profits six months after expanding the product line:

This is in line with the Pareto principle, a well-known observation named after the Italian economist Vilfredo Pareto. The Pareto principle posits that 80% of outputs derive from 20% of inputs (or some similar percentage relationship) across innumerable situations and disciplines. I'm guessing that you've seen instances of the Pareto principle at work in your own environment -- it tends to show up quite often in the business world.

In the example above, I've constructed a case in which 80% of the profits derive from 25% of the product items. Cosmic Fidgets sold per month is without dispute the metric we'd grab if our building caught fire.

This is a little counterintuitive. It's true that we should measure and optimize the total number of spinners sold each month. It may feel odd to elevate, as the single most important metric, a measure that excludes 20% of company sales.

But those Cosmic Fidgets, with their dreamy etchings and transparent bearings, are tapping deep into the psyche of the seventh-grade mind and vanishing in a vortex of market demand. We're likely to encounter the least resistance to near-term revenue and profit growth if we make strategic decisions around ramping up Cosmic Fidgets sales.

Of course, we'll continue to promote our other existing lines, and introduce new ones in the future. Growth potential aside, in the long run, Cosmic Fidgets actually represent a revenue concentration that must be dealt with as our company matures.

To conclude, rethinking your existing analysis framework obviously isn't a five-minute task. But I encourage you to embrace the process of developing key metrics, then isolating the most important one, and refining it. If nothing else, when you're done, you'll have a pretty solid framework from which to challenge your current strategic assumptions.