Please ensure Javascript is enabled for purposes of website accessibility
Log In Help Join The Motley Fool
Free Article Join Over 1 Million Premium Members And Get More In-Depth Stock Guidance and Research
By Daniel B. Kline – May 25, 2017 at 11:28AM

Of course, learning it isn't going to be easy.

Every employee looks for a way to get ahead.

Sometimes it's possible to outwork your colleagues to get noticed, but in many cases that's not enough. If you work with high achievers and hard workers, then hustle and extra effort become the norm.

That means that to stand out, you need to go above any beyond. In many cases, gaining an added skill -- something that's not easy to learn -- can help you stand out. One thing you can do that will help at nearly any job is learning to speak another language. 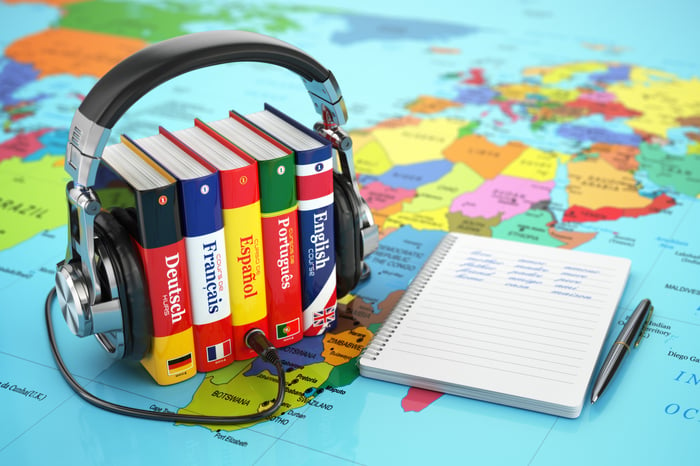 Leaning a second language may give you an edge at work Image source: Getty Images.

Why learn another language?

The world has increasingly become a smaller place. The vast majority of professions contain opportunities where adding language skills would be an advantage.

If, for example, you work in customer service or hospitality, knowing another language gives you a chance to be a problem solver when your coworkers wouldn't be able to, In sales, speaking multiple languages opens up new markets, and in the technical/digital world it has become common for teams to span multiple countries. A second language can help an educator reach new students, and a journalist who speaks multiple languages can expand his or her reporting.

It's hard to find a field where becoming bilingual won't give you en edge, specially because while over 50% of Europeans can hold a conversation in multiple languages, less than 20% of Americans can. And the vast majority of multilingual Americans grew up in homes where two languages were spoken, while only 1% gained proficiency in a classroom, according to The Atlantic.

What language should you learn?

While any widely spoken second language would bolster your resume, deciding which one to study requires analyzing your profession. In most cases, if you focus on the United States, it makes sense to learn Spanish, since that's the second most popular language after English.

If you work in a more global profession, your choice becomes harder. Chinese is the most popular language in the world, and because of the effort it takes to learn it, few Americans speak it. Hindi, one of 23 languages spoken in India, might be useful to anyone working for a technology company, as in some cases would Japanese.

Picking a language should be a practical choice based on the likelihood that the new skill will aid you at work. Learning French, for example, may make your trip to Paris easier, but if it's not a language used in your profession or workplace, then learning it may not be a great investment of your time.

Where do you start?

While learning a language can be a daunting task, it's important to take the first step. There are a number of online programs, software such as Rosetta Stone, and even lessons you can listen to while driving that are readily available. In addition, most community colleges offer classes in various languages, and most larger cities have schools dedicated to teaching language.

But learning a language is hard

Becoming completely fluent in a language takes most people years and requires some level of full immersion, such as living in a place where it's spoken. The best thing about language, however, is that it's not an all-or-nothing situation. There's value in being able to hold a simple conversation or even to being able to exchange basic greetings and pleasantries.

The hardest part of learning a language is getting started and staying dedicated to the task when sometimes progress can be difficult to gain. Learning a language, however, is simply a case of effort. Put the work in, and you will steadily gain proficiency.

It will take time, but the benefits of being bilingual should give you an edge over co-workers and others in your chosen field. In addition to the work edge it will give you, speaking a second language will open up new opportunities to meet people and communicate with more of the world.