Graduating college students should start working on landing their first jobs well before graduation. The summers between sophomore and junior years offer great opportunities for internships or jobs in the field where you hope to work. If you did not do that, or those efforts did not result in an actual job offer, hope isn't lost. It's still possible to get your first job, even one in the field you studied; it's just going to take a little more effort.

Landing that elusive first real job can vary in difficulty by profession. In some fields -- engineers and certain technical areas come to mind -- recruiters will come to you. For many professions, however, the weight of getting hired falls squarely on the graduate's shoulders. That's a daunting task, but it's one you can accomplish if you dedicate yourself to getting it done. 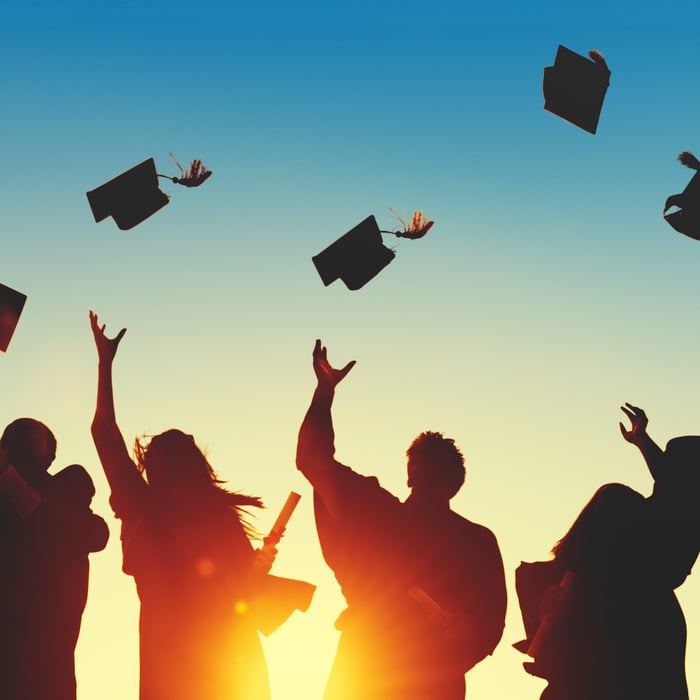 Graduating is an accomplishment, but it's only one step on a long road. Image source: Getty Images.

While it's tempting to take the summer off after graduating, working will give you a leg up on other graduates who are willing to goof off for a few months. Once you get out of school, getting a job needs to become your job. It's not necessarily a 9-5, 40-hour-a-week gig, but it's a task you should devote time to everyday.

In the old days, that meant pounding the pavement -- literally knocking on doors handing out resumes. The digital age has changed that, but each day, you'll need to do a few things.

These are not the only things you can do, but it's a start. The important thing for you to remember is that, no matter how many emails go unanswered or applications get ignored, it's important to keep plugging away.

2. Have your materials in order

Very few colleges actually teach their students what a resume should look like, and it varies by profession, but it's important to have yours in good shape. In many cases, it may be worth hiring a professional. At the very least, you should find a good template online that's specific to your proposed line of work -- and have more than one person proofread it for you. You'll also want to avoid standard, embarrassing blunders that may cause a hiring manager to throw your resume away without giving it much attention.

It's also very important that you tailor your resume and cover letter to the actual job being advertised. That's especially important when starting out because your limited work history won't answer the question as to why the company should take a chance on you. It's up to you to do that in your resume and cover letter, which should address the requirements mentioned in the job posting while politely detailing relevant skills that may not be obvious.

Once you graduate from college, it's important to stop thinking and acting like a college student. Chances are that most people hiring for jobs won't be as impressed by your fraternity or sorority affiliation as you might think, nor will they find your KegMaster@gmail.com address as funny as your friends do. In addition, human resources (HR) people and potential bosses probably won't take kindly to those risqué spring-break photos on your social-media feed.

Before applying for jobs, you need to clean up your act. Get a professional email address that's a variant on your name (but not cutesy), and scrub your social-media accounts (or at least make them as private as you can).

While you may someday hope to run a company or have some other top-tier job, you can't push the door open without getting a foot in first. My first full-time job grew out of a part-time, bottom-level position at a magazine company during my senior year of college.

During winter break, the editor/only full-time staff member on one of the magazines I helped with was fired during a two-week period when top management was traveling to various trade shows. That left nobody to put the magazine together, so I stepped into the opening and did the job as best as I could.

That turned out to be good enough, and the company hired me to take over the magazine part-time while I finished school, and then full-time once I graduated. That was a unique situation, but it illustrates that sometimes just getting in the door -- even if it's mostly answering phones and making coffee -- can be the first step on your journey, as long as you're willing to work.