Open offices, more casual dress codes, and smartphones -- giving everyone access to social media, friends and family, and everything else on the internet -- sometimes leads people to being less proper in the office than they may have been in the past.

Many workplaces have loosened up. That means it's OK to discuss the game or how much you didn't like the Dirty Dancing remake on ABC, but not all behaviors are office-appropriate.

Even if you work in a hip space with foosball tables, free coffee and energy drinks, and a flip-flop-friendly dress code, some rules remain. It's fine to relax the formality at work, but do know where the line is -- and never cross it.

These are not the only things you should not do at work (we shouldn't have to tell you not to cut your toenails or fry a turkey at your desk), but they are some of the top traps people fall into. 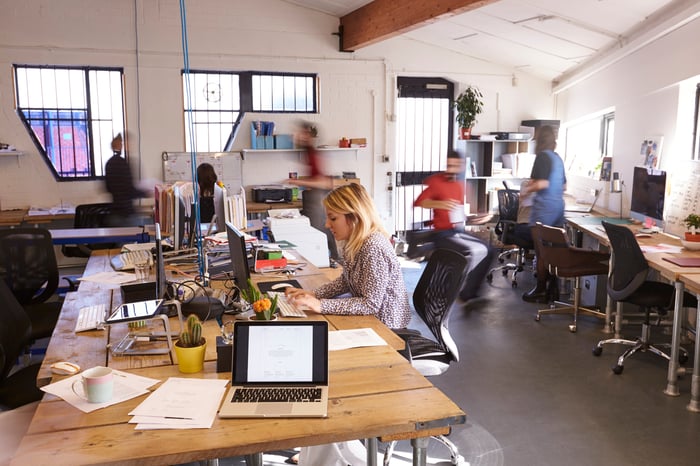 Just because your office is "fun" does not mean anything goes. Image source: Getty Images.

1. Don't fight with your significant other

Most offices used to have rules about personal phone calls because those calls were being made over company equipment. Now, the omnipresence of smartphones makes it easier to keep in touch with your partner, but that can be a mixed blessing.

Even though it's easy to communicate during work hours, you should limit that communication to quick check-ins via call or text. It's fine to say a quick hello or share when you might be leaving for the night, but that should be about the extent of it. Certainly, leave any disputes until you get home: At best it's annoying for your co-workers to hear your squabbles, and at worst you may find yourself saying something you later wish they didn't hear.

2. Don't use your work email for something personal

Many people are on their work email so often that they use it for personal tasks as well. That may be acceptable for very short tasks like sending a quick RSVP for a social event, but for anything more extensive, it's best to keep work and personal email separate.

Your employer likely has the ability to read your email. They may not be doing that, or they may be using a software program to scan for certain red flags. It's also possible that they are not checking your email, but just the fact that they could be means you should not share anything on it that you would not say out loud.

Your work computer or phone should never be used for a job search, even in off-hours. The same goes for using the fax machine at the office, or making copies of your resume on the copier.

Besides the risk that you might be discovered, this is simply impolite. If you do get a new job, you'll want to maintain a good relationship (or at least a professional one) with your previous employer. If they discover evidence of a job search as they clean out your computer or phone, that likely won't happen.

Every office has its own policy on workplace romances. In general, they are a bad idea --especially with someone you work with regularly, due to potential uncomfortable situations should things not work out. If, however, you are allowed to pursue office romance, you should never be aggressive about it.

If a friendship develops that turns romantic, then so be it -- but be very careful. Asking out a coworker you don't know well can create an uncomfortable future if he or she rejects your advances. Romance is best kept out of the office, but if it happens, tread very lightly.

While many workplaces have become looser, language standards have in many cases become stricter. Even a seemingly innocuous comment like "you look nice today" can be taken the wrong way.

Comments about how people look are just a minefield it's best to avoid. This is similar to the rule about never asking a woman if she is pregnant or congratulating her on her future baby: If you are wrong, the fallout can be devastating. The same goes for any comment you might make on someone's appearance at work. The risk is not worth the reward, so keep it out of the office.